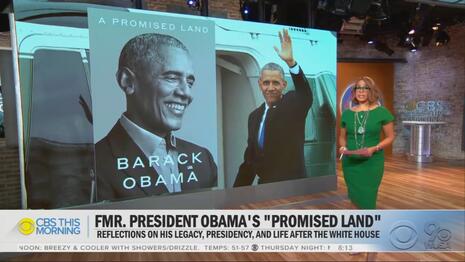 Who needs a PR machine when you have CBS News? That’s certainly the case when it comes to Barack Obama and his new book. In less than 24 hours, CBS promoted the Democrat’s new book for 48 minutes over multiple programs. The gushing over Obama will continue on Tuesday as the BET Network, a division of ViacomCBS, will push the book for another hour.

CBS This Morning co-host Gayle King on Monday devoted two segments to A Promised Land. This was segments on CBS Sunday Morning and 60 Minutes. Considering that King is a Democratic donor and has vacationed with the Obama family, it’s not surprising that the questions were very friendly. Talking about unidentified "people," the co-host enthused over her own interview: “People have been reaching out, saying they forgot, not forgot, but it was reminder about the humanity and intelligence of Barack Obama and also Michelle Obama."

The co-host worried, “Now [ObamaCare] is in the Supreme Court. Right now as we speak, are you concerned, worried about that? The Trump administration seems to actively want to undo everything that you have done.”

Here’s King’s idea of a tough question: “Do you have an example of a bonehead mistake you made [as president]?” More representative were queries like this: “You write that after you left office, you all were able to rediscover, recapture your love. What does that mean, what does that look like?” 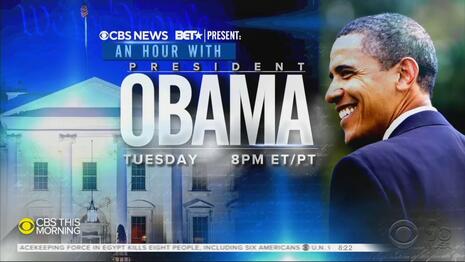 On Sunday, CBS Sunday Morning devoted 12 minutes and 57 seconds to promoting the book. (Go here for more on that.) That night, 60 Minutes interviewed the Democrat for 23 minutes and 33 seconds. (And head over here for our write-up of that lovefest.)

Add that to the 11 minutes and 37 seconds on Monday morning and the network has pushed the book for 48 minutes and seven seconds. And again, CBSViacom sister channel BET will contribute another hour.

The Obama propaganda on CBS This Morning was sponsored by Cadillac and Hyundai. Click on the links to let them know what you think.

A partial transcript from Monday can be found below. 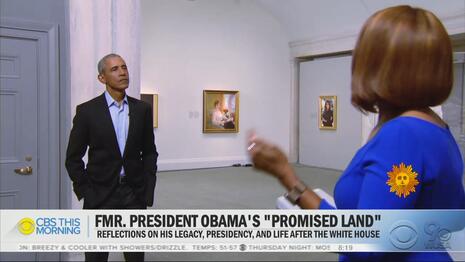 GAYLE KING: Former President Barack Obama is opening up about his 2008 campaign and time in the White House. He has been looking back while writing his memoir. It’s called A Promised Land and it comes out tomorrow. Includes blunt accounts of challenges he faced in office. We sat down with President Obama for CBS Sunday morning. He talked about his decision to run for president, the early years of the presidency, and his entrance on the national stage back in 2004 when he was just a state senator from Illinois.

BARACK OBAMA: In no other country on Earth is my story even possible.

GAYLE KING: Ted Kennedy said to you, you don't choose the time, the time chooses you.

KING: So, how did you know it was the time?

KING: Do you have an example of a bonehead mistake you made?

OBAMA: The one is I am on the campaign trail, trying to make a point when asked about why would working class voters vote for the Republicans when it is against their economic interest. I say “Well, look, they have been disappointed, they see the economy shifting under their feet, they feel ignored, so they cling to their guns.”

KING: Their religion and their guns.

OBAMA:  It was a classic example of where the intentions of what I had said didn't match up with the words right, but it had consequences because I think despite all of the policies I actually put in place to make sure that those folks felt heard, it became a barrier for me being able to reach them.

KING: Now it [ObamaCare] is in the Supreme Court. Right now as we speak, are you concerned, worried about that? The Trump administration seems to actively want to undo everything that you have done.

KING: You write that after you left office, you all were able to rediscover, recapture your love. What does that mean, what does that look like?

KING: Lot of people are happy he is back. People have been reaching out, saying they forgot, not forgot, but it was reminder about the humanity and intelligence of Barack Obama and also Michelle Obama. They talk candidly about the White House and the effect it had on her and their marriage. Let's remember when she left office, she was emotional when she said being first lady to all of us was the greatest honor of her life, and I know that she believes that's true.

KING: You can see more of our interview with president Obama in a one hour special on BET, which is part of Viacom/CBS. It airs tomorrow night at 8/7 central. Right the same day that A Promised Land drops.