Worst Problems EVER? ABC’s Bruce Thinks Joe’s Got It Tougher Than Lincoln 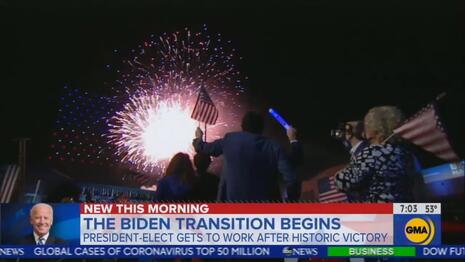 COVID? Super spreader? Never mind. The journalists at ABC on Monday were too busy cheering the Biden/Harris ticket and falsely claiming that Joe Biden faces the most difficult problems of any president-elect ever. (Are they familiar with the outbreak of the Civil War? The Great Depression?)

With no worry about COVID, George Stephanopoulos trumpeted, “There was spontaneous celebrations in so many American cities when the news broke Saturday morning that Joe Biden has defeated Donald Trump.” Reporter Mary Bruce touted, “Well, after a weekend of celebrating this morning it's time to get down to business.”

Without evidence, Bruce falsely claimed, “Never before has a president-elect faced so many urgent and complicated problems, from the pandemic to the economy to trying to unite the country.”

Never? President-Elect Lincoln faced the possible destruction of the country in 1860 as slavery and the coming Civil War wreaked havoc on the nation. In 1932, President-Elect Franklin Roosevelt looked forward to the depths of the Great Depression and an almost 24 percent unemployment rate. (For comparison, it’s 6.9 percent now.) Of course COVID is serious, but this type of historically false comparisons are just designed to demand everyone unify around Joe Biden.

Bruce lauded, “After celebrating their historic win.... This morning the Biden/Harris team is getting to work.” Apparently COVID must be solved because Bruce and Stephanopoulos both ignored the problem of thousands of people getting in close proximity to celebrate Biden.

In contrast, CBS This Morning co-host Anthony Mason on Monday chided, “The weekend celebration for the President-Elect could make it harder for the coronavirus task force to do its job. The White House Press Secretary has called on Mr. Biden to condemn the street rallies that she called super spreader events.” On the Today show, Miguel Almaguer at least briefly noted, “Large crowds gathering nationwide to celebrate the election adding to concerns about the virus's spread.”

Get ready for journalists like Mary Bruce and George Stephanopoulos to relinquish their watchdog role now that a Democrat is back in the White House.

The Biden propaganda on ABC was sponsored by Toyota and Xfinity. Click on the links to let them know what you think.

GEORGE STEPHANOPOULOS: This came at the close of a history making weekend. There was spontaneous celebrations in so many American cities when the news broke Saturday morning that Joe Biden has defeated Donald Trump, will be the next president of the United States

MARY BRUCE: Good morning, Robin. Well, after a weekend of celebrating this morning it's time to get down to business. Never before has a President-Elect faced so many urgent and complicated problems, from the pandemic to the economy to trying to unite the country. Joe Biden has a very long to do list in front of him and this morning he's making it clear, he is already getting started. After celebrating their historic win —

JOE BIDEN: This is the time to heal in America.

KAMALA HARRIS: While I may be the first woman in this office, I will not be the last. Because every little girl watching tonight sees that this is a country of possibilities.

BRUCE: This morning the Biden/Harris team is getting to work. Their first priority, getting the pandemic under control. The President-Elect today announcing his team of scientists and experts to tackle this crisis.

BIDEN: Our work begins with getting covid under control. I will spare no effort, none, or any commitment to turn around this pandemic.

BRUCE: His plan includes doubling the number of testing sites and boosting tracing. Calling on governors to mandate masks and a task force to look at racial disparities. looking ahead his team unveiling its official transition website, BuildBackBetter.com outlining issues he says he'll tackle on day one, much at undoing President Trump's controversial actions, like the so-called Muslim ban and rejoinng the Paris Climate Accord. But perhaps their biggest challenge, uniting the country their biggest challenge.

BRUCE: Biden with a direct appeal to the president's supporters.

BIDEN: For all those of you who voted for President Trump, I understand the disappointment tonight. I've lost a couple times myself, but now let's give each other a chance. It's time to put away the harsh rhetoric, lower the temperature, see each other again, listen to each other again.

BRUCE: President Trump still has not conceded the race and is vowing to file long shot legal challenges, releasing a statement saying, “Only this election is far from over.” And many top Republican leaders still won't recognize Biden's win.

STEPHANOPOULOS: Joe Biden has won this election. Why can't you acknowledge it?

SENATOR ROY BLOUNT: It's time for the president's lawyers to present the facts and then it's time for those facts to speak for themselves. It seems unlikely that any changes could be big enough to make a difference.

BRUCE: But Biden and Harris would not be denied their moment.

BRUCE: Harris relishing her place in history becoming the first woman, the first black American and the first Asian-American to become Vice President-Elect. As news of their victory spread huge celebrations broke out in cities across America. From Black Lives Matter plaza in front of the White House to Philadelphia where the city's vote helped push Biden over the top. Outside his childhood home in Scranton, Pennsylvania, where it all began. Now, looking ahead, Biden's agenda could face a real challenge on Capitol Hill with it looking likely Republicans could retain control of the Senate. All eyes, of course, on those Georgia runoff races that will determine the balance of power here in Washington. And, George, Biden could face real challenges just trying to unite his own party going forward.