There’s a saying: “A picture is worth a 1000 words.” When it comes to hypocritical, biased media, so is a headline. Here is The Washington Post front page from February 14, 2016, the day after legendary conservative Supreme Court Justice Antonin Scalia died. 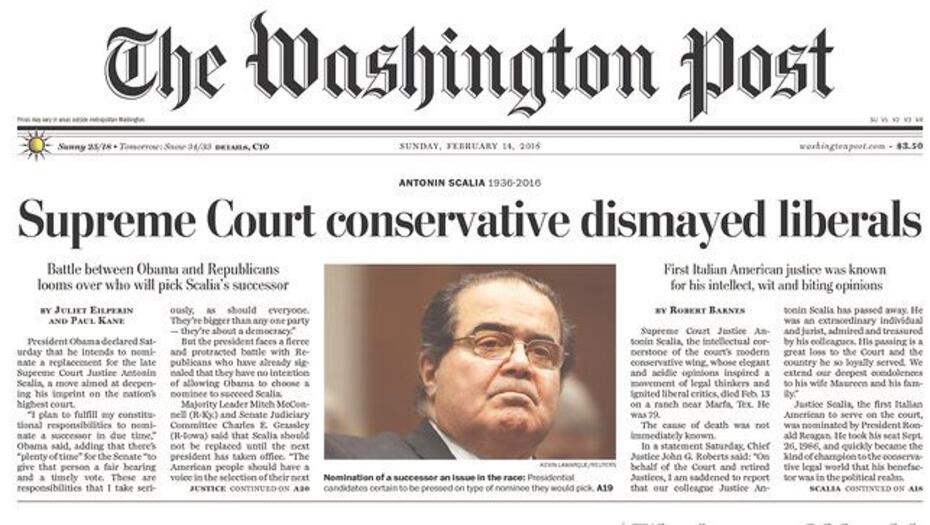 As I wondered at the time, what was the most important thing for readers of Washington Post to see on the front-page of the paper? A  big headline focusing directly on the legacy or impact of the life of Antonin Scalia? No. In bold, large font, the Post declared, “Supreme Court Conservative Dismayed Liberals.” 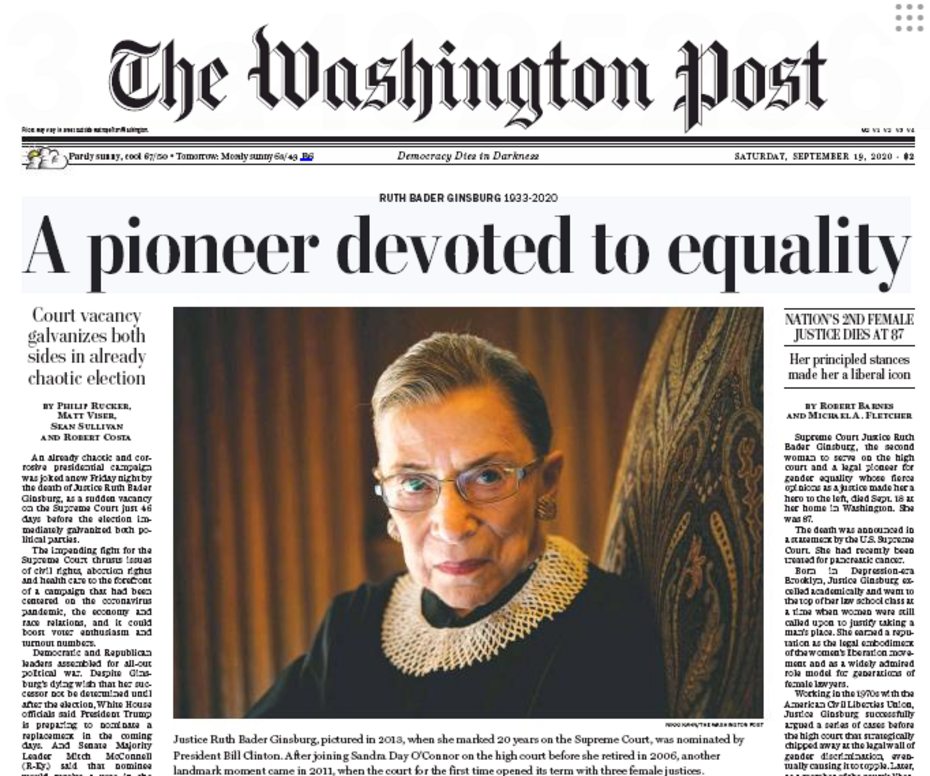 Got that? Scalia “dismayed liberals.” Though her rulings may have dismayed conservatives, the Post focuses on her “devotion to equality.”

Back in 2016, Post writer Robert Barnes complained of Scalia:

He mocked the notion of a “living” Constitution, one that evolved with changing times, as simply an excuse for judges to impose their ideological views.

Critics countered that the same could be said for originalism — and that the legal conclusions Justice Scalia said were dictated by that approach meshed neatly with the justice’s views on the death penalty, gay rights and abortion.

Here is the same Barnes (along with co-writer Michael A. Fletcher) on Saturday:

On the court, she became an iconic figure to a new wave of young feminists, and her regal image as the “Notorious RBG” graced T-shirts and coffee mugs. She was delighted by the attention, although she said her law clerks had to explain that the moniker referred to a deceased rapper, the Notorious B.I.G. She also was the subject of a popular film documentary, “RBG” (2018).

When she was named one of Time magazine’s 100 most influential people in 2015, her colleague and improbable close friend, conservative Justice Antonin Scalia, wrote about her dual roles as crusader and judge. “Ruth Bader Ginsburg has had two distinguished legal careers, either one of which would alone entitle her to be one of Time’s 100,” wrote Scalia, who died in 2016.

Justice Ginsburg was also criticized for speaking too frankly in interviews and speeches, especially about abortion rights and same-sex marriage.

She drew criticism for surprisingly critical remarks about businessman Donald Trump, saying she feared for the court and the country if he were elected president. After several days of controversy, she issued a statement saying it was wrong of her to have commented about politics, but not apologizing for her views.

The word "controversy" is used exactly once in the story on Ginsburg. But the important thing is that she didn’t “dismay liberals” like Scalia.