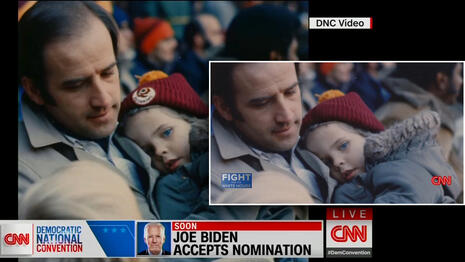 If there was any doubt, it can now be dispelled: CNN on Monday aired a digitally airbrushed picture of Joe Biden holding his son wearing what Democrats and the cable network don’t want you to know is a Washington Redskins ski cap. So either CNN or the DNC altered the image to remove the offensive (they assume) logo.

Here is the introductory video to night four of the Democratic National Convention on August 20th. In the video, Biden is holding his son Hunter. The Redskins logo is visible.

In a fawning, hour-long documentary called Fight for the White House: Joe Biden's Long Journey on Monday, CNN used the picture again. But it had been changed. Biden's son is now wearing a simple red ski cap. 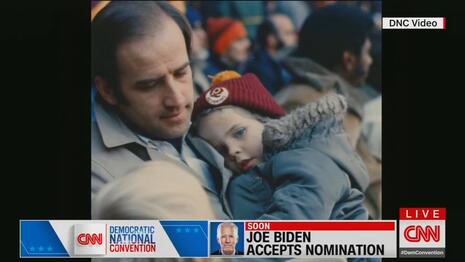 According to FoxNews.com: “The Democratic nominee and former vice president initially shared the photo in June to commemorate Father's Day.” So did CNN alter the image? Did the Democratic Party decide its CNN base couldn’t handle the former logo of the now-Washington Football Team?

CNN journalists and execs, could we please get this cleared up?

UPDATE: On Wednesday afternoon, Wulfsohn reported that the Biden campaign has now admitted editing the photo and blamed it on copyright concerns. According to a CNN source cited by Washingtonian magazine, “We received this picture and many others from the Biden campaign, and any additional inquiries should be sent their way. Future airings will include the original photo.”

This digital trickery on CNN was sponsored on Monday by Amazon and Volvo.