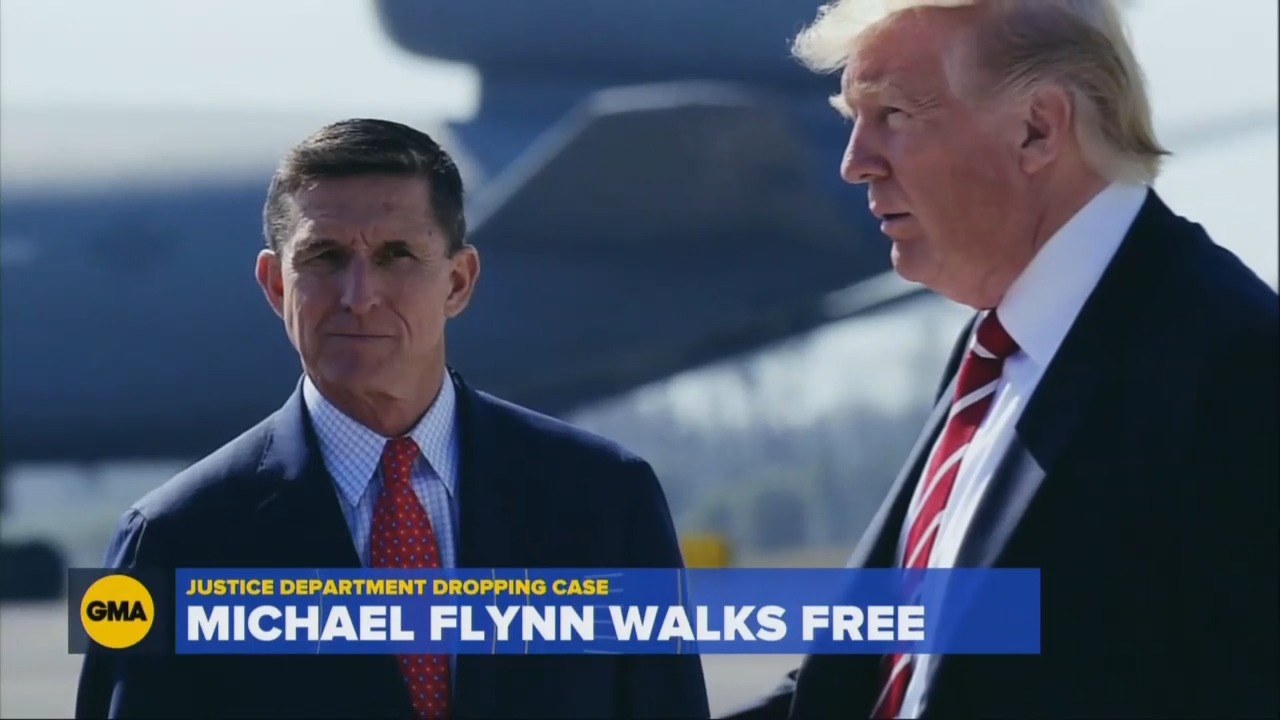 Good Morning America journalists melted down on Friday as they reported the Justice Department dropping the case against Michael Flynn. Calling it “stunning,” a “bombshell” and “blowing up” the case, ABC worried that “Michael Flynn walks free.” The morning show also skipped over a key point in the case.

Reporter Pierre Thomas breathlessly opened the show with this: “What some are calling an extraordinary move, the Justice Department essentially blew up the first major prosecution by special counsel Bob Mueller and the Department appears to be saying the FBI should never have interviewed Michael Flynn in the first place.”

He then moved on to Flynn’s “shame”: “Twenty nine months after leaving this courthouse in shame following pleading guilty to lying to the FBI, the Justice Department that convicted Michael Flynn now seeking to throw out the case.”

An ABC graphic treated the dismissal as though it was the problem: “Michael Flynn Walks Free.” Another graphic trumpeted, “Michael Flynn Bombshell.” Co-host George Stephanopoulos described the news as a “stunning headline.”

No mention in the segment of the real bombshell, that the FBI openly plotted over how to entrap Flynn. Fox News explained the efforts to “to get him to lie so we can prosecute him or get him fired”:

Explosive new internal FBI documents unsealed Wednesday show that top bureau officials discussed their motivations for interviewing then-national security adviser Michael Flynn in the White House in January 2017 -- and openly questioned if their "goal" was "to get him to lie, so we can prosecute him or get him fired."

The handwritten notes -- written by the FBI's former head of counterintelligence Bill Priestap after a meeting with then-FBI Director James Comey and then-FBI Deputy Director Andrew McCabe, Fox News is told -- further suggested that agents planned in the alternative to get Flynn "to admit to breaking the Logan Act" when he spoke to then-Russian Ambassador Sergey Kislyak during the presidential transition period.

The Logan Act is an obscure statute that has never been used in a criminal prosecution; enacted in 1799 in an era before telephones, it was intended to prevent individuals from falsely claiming to represent the United States government abroad.

For more on how the networks celebrated Flynn’s plea deal back in 2017 and minimized the end of prosecution in 2020, see an analysis by the MRC’s Nicholas Fondacaro.

GEORGE STEPHANOPOULOS: The Justice Department drops its case against former National Security Advisor Mike Flynn who twice pleaded guilty to lying to the FBI. The fallout this morning.

STEPHANOPOULOS: We’re going to go to the Department of Justice now and that stunning headline. The President's former National Security Advisor Michael Flynn, charges against him have been dropped by the Justice Department. He pleaded guilty twice for lying to the FBI about his conversations with Russia's ambassador. Our Chief Justice Correspondent Pierre Thomas is tracking the story. Good morning, Pierre.

PIERRE THOMAS: Good morning. What some are calling an extraordinary move, the Justice Department essentially blew up the first major prosecution by special counsel Bob Mueller and the department appears to be saying the FBI should never have interviewed Michael Flynn in the first place. Twenty nine months after leaving this courthouse in shame following pleading guilty to lying to the FBI, the Justice Department that convicted Michael Flynn now seeking to throw out the case. In a highly unusual and perhaps unprecedented move that shocked some law enforcement officials, the department seeking to throw out a conviction where the defendant had admitted to his crimes twice in open court. Flynn's guilty plea centered around lying about his contact to then Russian ambassador Sergey Kislyak. He was fired for misleading the Vice President about his communication with the ambassador and when confronted by the FBI lied again.

DONALD TRUMP: I fired him because of what he said to Mike Pence. Very simple.

THOMAS: No career prosecutor signed on to the motion to dismiss including the special prosecutor who worked the case but Attorney General Barr's hand picked acting U.S. Attorney concluding that his prosecution was unjustified and that the lie he told the FBI was, quote, “not material because the bureau had decided to close an investigation into whether Flynn had been compromised by the Russians before they conducted the interview.” Now, the President who forced Flynn out is calling him a hero.

TRUMP: He was an innocent man. He is a great gentleman.

THOMAS: The President directed more fire at the FBI for a Russia investigation that he believes should never have been started.

THOMAS: Critics complaining overnight that Barr is simply doing the bidding of the President and trying to systemically undermine the Russia investigation. This morning, House Judiciary Chairman Jerry Nadler calling for an Inspector General investigation. So far no comment from the FBI but FBI officials have long maintained that the criminal justice system is severely undermined when suspects lie to them. Former FBI Director James Comey tweeting that the Justice Department has, quote, “lost its way.” So far we've not heard from the judge overseeing the case. In the past he was highly critical of Flynn.