In the past, liberals in the media complained that there weren’t enough White House press briefings. Now, there are too many. According to MSNBC host Chris Hayes, it’s both “crazy” and “dangerous” to simply air Donald Trump’s coronavirus updates

Talking to Democratic Senator Chris Murphy on Monday night, Hayes lashed out: “I think that regular information in times of crisis from the government on sort of the science and facts and policy are essential. But I personally can’t help but feel these daily sessions are bad for the country, even dangerous from a public health perspective…. What is your view?”

Lamenting that he doesn’t make the decision for the network, Hayes complained and even managed to take a sneering shot at Christians: “It’s obviously above my pay grade. I don’t make the call about we take them or not, but it seems crazy to me that everyone is still taking them when you got the My Pillow guy getting up there talking about reading the Bible.”

Not mentioned by the elitist Hayes is that MyPillow CEO Mike Lindell will be producing 50,000 masks to fight the coronavirus. But why bring that up? Better to mock someone for his faith. 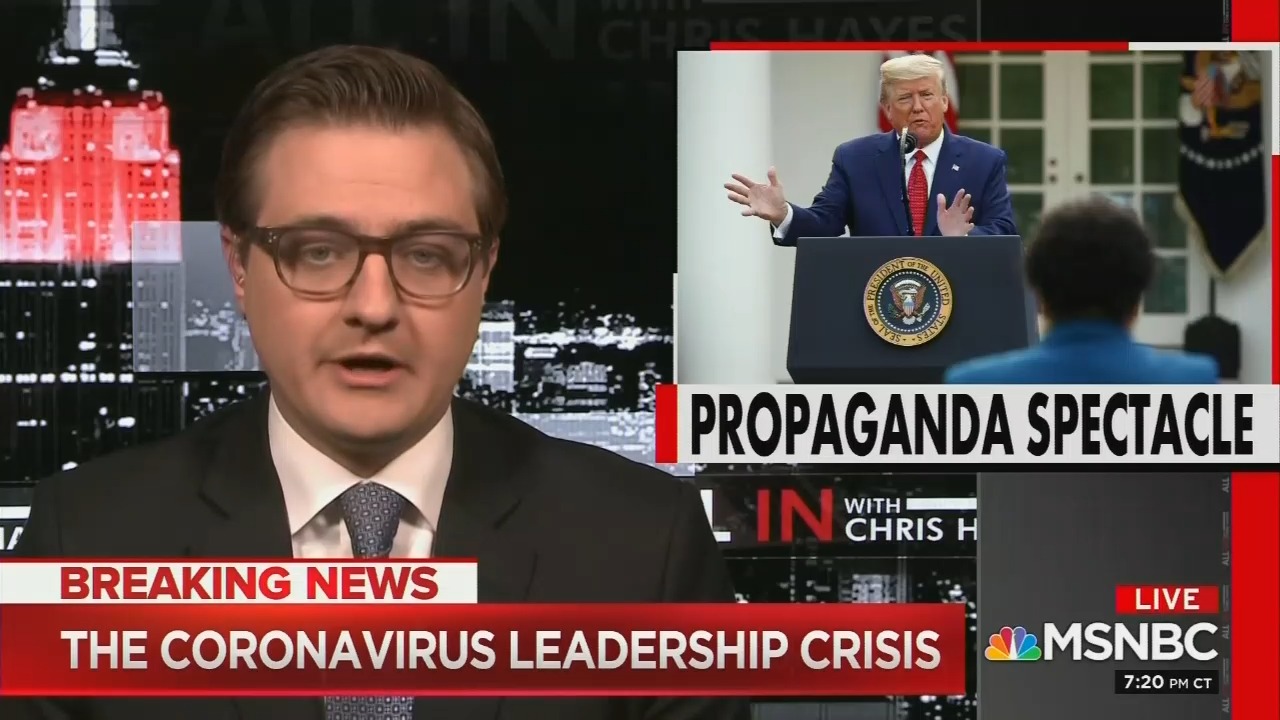 As previously noted on NewsBusters, MSNBC prime time hosts are lobbying for the network to drop the briefings. Rachel Maddow declared, “If it were up to me, and it’s not, I would stop putting those briefings on live TV. Not out of spite, but because it’s misinformation” that can “cost lives.”

Since everything is political for MSNBC liberals, what could be the real reason they don’t want the briefings covered? Could it be the President’s, current, strong polling on corona?

A partial transcript of the March 30 All In interview is below. Click “expand” to read more.

CHRIS HAYES: I’m joined now by Democratic Senator Chris Murphy of Connecticut. He’s been sounding the alarm about the sluggish federal action to help hospitals and first responders. He tweeted today that the new Republican argument is that you criticize President Trump’s coronavirus response, you are disloyal Chinese communist propagandists.

Senator, I think that regular information in times of crisis from the government on sort of the science and facts and policy are essential. But I personally can’t help but feel these daily sessions are bad for the country, even dangerous from a public health perspective. What do you -- what is your view?

SEN. CHRIS MURPHY (D-CT): Well, the President really sees, you know, his only responsibility as one of managing a public relations campaign about trying to set expectations so ridiculously low that he can’t help but step over the bar. I mean, listen, there has been no strategy from this administration, no comprehensive response to coronavirus from the very beginning.

He has not taken control of the manufacturing of protective equipment. He has not federalized the supply chain. He has issued absolutely no national guidance on social distancing or business and school closures. He has left all of this to the mayors and the governors. And instead, he just runs a public relations operation. That, as you mentioned, unfortunately, regularly dispenses very bad advice to Americans.

And so, yes, I think it’s pretty harrowing for all of us to watch this lack of leadership from the White House and to frankly watch a lot of the media go along with it because his press conferences as always, are still entertaining, in part because he is competitive, in part because he does lie, and you can catch him in those lies and hold him accountable, but that doesn’t make for an effective public health response.

HAYES: Yeah, that’s why he’s bragging about the ratings. It’s obviously above my pay grade. I don’t make the call about we take them or not, but it seems crazy to me that everyone is still taking them when you got the My Pillow guy getting up there talking about reading the Bible. On February 5th, you were in a briefing and -- on preparedness on precisely this question. You tweeted this. On February 5th, I sat in a meeting with top administration officials. As senators press them to request emergency funding to hire staff and stockpile supplies for the coming crisis. They said they had it covered, didn’t need any additional funding. What a fatal screw up. What was that briefing like on February 5th?

HAYES: You know, there’s concern now about -- you look at this federalized response. It’s also a concern now that you’re getting favoritism. And the President basically said that he admitted this. He said, he tells Mike Pence not to call certain governors he doesn’t like. Gretchen Whitmer is on the record saying that shipments of needed supplies were canceled. She believes that’s at the behest essentially of the White House. There’s ProPublica reporting that Florida, on the other hand, has gotten everything they’ve asked for. There’s been a wide disparity in terms of how the federal government has responded to some states and others. And I should note here for fairness, Andrew Cuomo has been very grateful for some of the federal aid that has been directed to New York after lots of back and forth.

Do you have those concerns right now that there’s essentially an uneven response federally that depends on the politics of the governor at play and the degree to which the President’s ego is his massaged?

MURPHY: Well, it sort of feels like Ukraine all over again. You know, the President is, you know, now instead of using foreign aid, using emergency relief in order to try to get people to do his political bidding, I mean, the message seems pretty clear. If you criticize the president, then you are going to get attacked and you are potentially going to have critical medical supplies withheld. And if you get the President’s back politically, then we’ll send you what you need.

Listen, I, Chris, have called on Congress and the administration to federalize the manufacture and distribution of critical medical supplies because I just don’t see any way that the private sector gets the stuff to the places that needed the most. Admittedly, though, I’m very nervous about my own proposal, because that puts an enormous amount of power, additional power in the hands of a capricious and vindictive White House.

And so we’re caught between, you know, two unacceptable realities. One in which the private sector is misappropriating resources and not producing enough, and the second in which the President has authorities that any chief executive should possess, but he’s going to use them in a way that hurts the nations and benefits himself politically.

HAYES: Chris Murphy, a senator from Connecticut, thank you so much for being with me tonight.