CNN Slimes: Trump Is ‘Emulating’ the Propaganda of North Korea on Virus

CNN on Sunday continued the network’s efforts to politicize the coronavirus and blame Donald Trump. Host Fareed Zakaria trashed the President for “emulating” the “propaganda” of North Korea. Opening his Fareed Zakaria GPS show, the anchor hammered, “This crisis seems to have been designed to bring out the worst of Trump. The President doesn't like or trust experts, often explaining that he knows more than they do. He has bluffed and fibbed his way through much of his life.”

In a commentary rant based on his latest Washington Post column, Zakaria attacked, “In most global crises, the United States takes the lead and provides comfort and assurances to the world. In this one, Trump has been mostly AWOL.” He snarled, “The Trump administration has been copying the wrong Korea. Instead of the intelligence and expertise of South Korea, it is emulating the sycophancy, incompetence and propaganda of North Korea.”

CNN is joining MSNBC in attempts to blame all of this on Donald Trump. On March 12, Stephanie Ruhle moderated a conversation on whether this is Trump’s Chernobyl.

On March 6, MSNBC host Nicolle Wallace and contributor Eddie Glaude were practically rooting for the virus to be the President’s Hurricane Katrina.

On March 8, NBC and MSNBC host Chuck Todd speculated that this could be like Trump’s Iran Hostage Crisis.

A transcript of the March 15 segment is below. Click “expand” to read more. 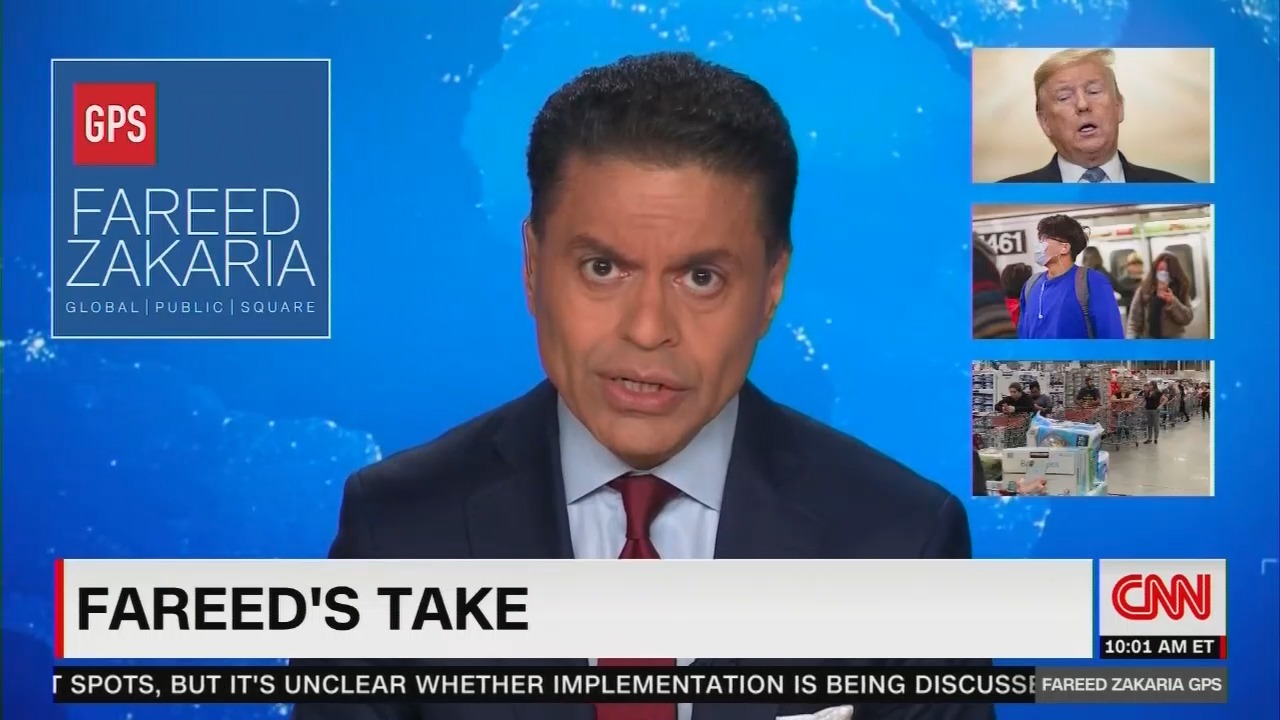 FAREED ZAKARIA: But first here's "My Take." The outbreak of an epidemic is something like a natural disaster, a spontaneous, accidental eruption that's no one's fault. But that doesn't mean we can do little about it and just wait for it to run its deadly course. The evidence is now clear, the spread of the virus can be greatly slowed if governments act early, aggressively and intelligently. Unfortunately that does not describe the response of the United States government to the coronavirus pandemic. We can track the speed of the outbreak since January by which time the virus had spread from China to     other countries. In South Korea, after an initial spike, the number of new cases has slowed. Hong Kong, Singapore and Taiwan, despite lots of travelers from China, have kept numbers low from the beginning.

In the United States, however, we are seeing accelerating increases. What did the successful countries do that seems to have worked? They began testing early and often. They coupled these tests with careful quarantines of those infected and tracking of where they had been to better predict where the next outbreaks might occur. The public health systems had surge capacity because funding had been adequate and authorities largely communicated simple, clear and consistent messages to the public. One new study which has not yet been peer reviewed argues that without enhanced detection and restrictions on movement the number of cases in China could have been 67 times higher by the end of February. And had China just started acting just one week earlier, there could have been 66 percent fewer cases.

ZAKARIA: In fact as the New York Times reported the director for Medical and Bio-Defense Preparedness of his own National Security Council gave a speech in Atlanta in 2018 saying, "The threat of pandemic flu is our number one health security concern. We know that it cannot be stopped at the border." The day after she made the speech, the White House eliminated her unit.
Trump did make one good decision, to ban most travelers from China from entering the United States. That bought the United States time. Alas, that time was wasted. Testing turned into a fiasco. If this were a war, the generals in charge of that operation would have been relieved of their command. Just one comparison, as of Friday, South Korea has tested about 250,000 potential cases. It has a population of about 50 million. In the United States, this would be the equivalent of testing about 1.5 million. As of Friday, according to the CDC, the United States had conducted about 15,000 tests in public health labs, more in private labs, but we don't even know how many. Per capita the United States has tested far fewer people than most other advanced countries.

Trump's most recent dramatic move, the travel ban on most of Europe is symbolic of the administration's actions. The thousands of Americans currently in Europe are apparently exempt as are a small number of others, more importantly the disease is already in the United States and spreading.
The policy was so poorly thought through that amendments, corrections and reversals were made to the president's speech within minutes of his having delivered it. This crisis seems to have been designed to bring out the worst of Trump. The President doesn't like or trust experts, often explaining that he knows more than they do. He has bluffed and fibbed his way through much of his life, and thinks nothing of doing so again, except this time we are not charmed or amused by the bluster, but rather frightened. In most global crises, the United States takes the lead and provides comfort and assurances to the world. In this one, Trump has been mostly AWOL. When he does appear, it is to blame the disease on foreigners and announce policies that are designed to reinforce that view. The broad collapse in global markets is surely in part a reaction to the vast vacuum of leadership in the White House. Donald Trump views everything from the narcissistic prism of his ego. He dismisses opposing views and insists that even the senior most members of his administration repeatedly praise him and his leadership at all times.

Watching the heads of America's leading science agencies prefacing their statements with ritual praise for the dear leader has been deeply depressing. Come to think of it, the Trump administration has been copying the wrong Korea. Instead of the intelligence and expertise of South Korea, it is emulating the sycophancy, incompetence and propaganda of North Korea.