ABC, CBS Toss Softballs to Top Iranian: 'When' Are You Going to Hit the U.S.? 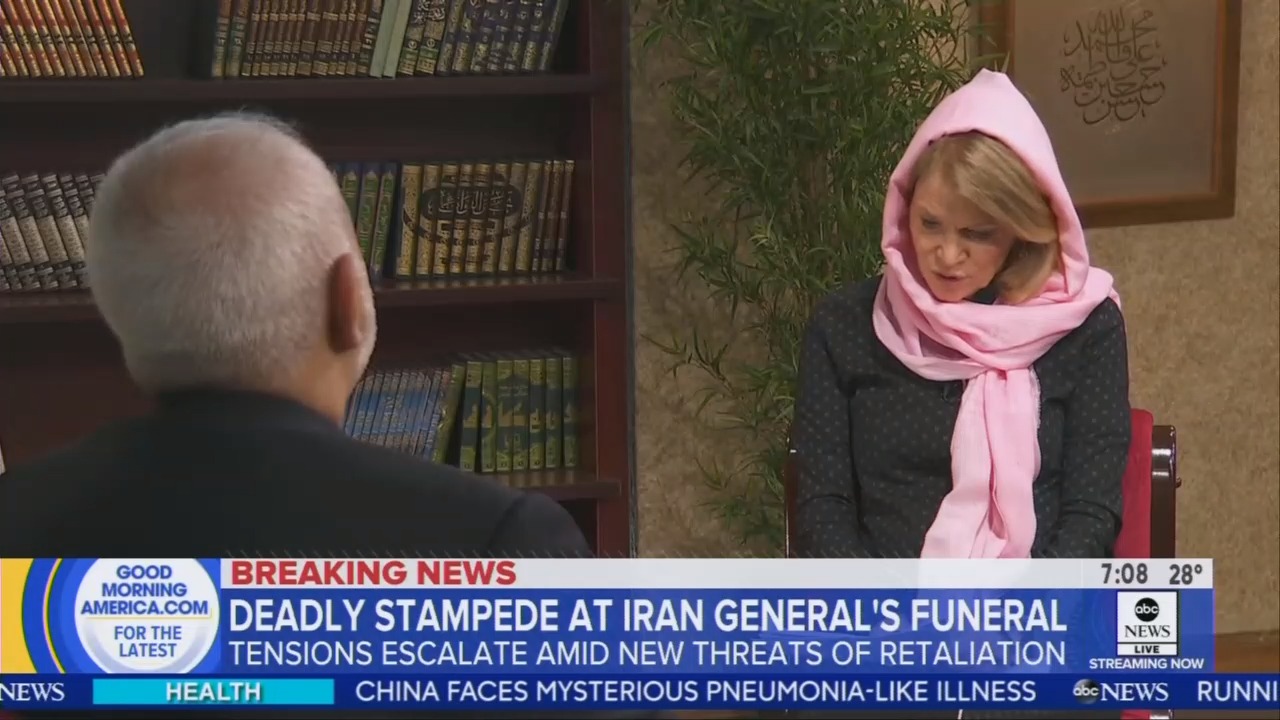 Journalists from ABC and CBS eagerly raced over to Iran to toss softballs to a top government official. They also wondered when the country will strike back at the United States. Good Morning America’s Martha Raddatz on Tuesday highlighted the “hundreds of thousands of mourners” “paying their respects” to the dead terrorist, Qasem Soleimani.

Over on CBS This Morning, Elizabeth Palmer talked to Iranian Foreign Minister Javad Zarif. He declared the country would get revenge: “We will do it not in a cowardly way, but in a clear and a proportionate way.” Palmer wondered, “When?”

She didn’t exactly grill Zarif, making him a victim at one point: “Can you confirm that you were denied a visa to travel to speak at the United Nations this week?” The journalist insisted she “pressed” the Iranian, but viewers didn’t see that. Instead, they got a summary:

He insisted that any attacks would be on legitimate targets. I pressed him. I said, "What do you mean by that?" He told me to consult the law of war, the Geneva Convention. Legitimate targets are defined as military targets specifically or infrastructure that helps the military.

Over on Good Morning America, Raddatz offered non-judgmental details on the coming attack, asking if the Iranians will take credit for it:

MARTHA RADDATZ: There are reports that your Supreme Leader said it must be a direct proportional response carried out in the open. Does that mean Iran will acknowledge —

JAVAD ZARIF: Once we do it? Yes, we will. We don't —  we don't carry cowardly acts of terror like the United States.

She also hyped the “massive crowds” mourning the terrorist responsible for the deaths of hundreds of Americans:

Hundreds of thousands of mourners have been taking to the streets as Soleimani is finally laid to rest. This image from space capturing the massive crowds paying their respects to Soleimani, vowing revenge against the U.S.

On Monday, Raddatz was moved by the “powerful,” “profound” mourners of Soleimani, people chanting “death to America.”

This isn’t new though. As MRC President Brent Bozell wrote in 2006, now-disgraced ex-anchor Dan Rather traveled to speak with Saddam Hussein before both conflicts with Iraq:

Rather secured two interviews with Saddam Hussein, both on the verge of his wars with the United States, one with 1990, one in 2003. In both of these interviews, Rather treated Saddam with extreme deference, like a world statesman. He asked in 1990 if Saddam thought Kuwait was "Vietnam in the sand for the United States." He sounded in 2003 like he and Saddam were on an airstrip in Casablanca: "Given the sober moment and the danger at hand, what are the chances this is the last time you and I will see each other?" Rather gained the access, and wasted it on his own vanity.

Transcripts of the CBS and ABC segment are below:

ELIZABETH PALMER: As you said, Qasem Soleimani is due to be buried today, and the official mourning period is over. So everybody is focusing on what comes next and certainly any possible reprisal attacks. To ask about that, I sat down with Iran's Foreign Minister, Javad Zarif, who was denied a visa by the United States to travel to New York this week. He'd wanted to attend meetings at the United Nations. Can you confirm that you were denied a visa to travel to speak at the United Nations this week?

JAVAD ZARIF (Iran Foreign Affairs Minister): That's what we are told by the Secretary General, that Secretary Pompeo called and said they didn't have enough time to review my request. That's not unexpected. But my question is, what are they afraid of?

PALMER: At Qasem Soleimani's funeral in his home city in the south of Tehran, there was another frenzied outpouring of grief and anger. There were also more public calls for reprisals against the United States. Iran has powerful allies and proxies in the region could be used to carry out revenge attacks. But Dr. Zarif appeared to rule that out. When I ask him about reports that Iran’s Supreme Leader has ordered that any revenge attacks should be proportional and carried out by Iranian forces.

ZARIF: We are a law-abiding nation. When we take action, it won't be disproportionate unlike what President Trump has said. There has been the killing of an Iranian, several Iranians citizens and several top ranking, high-ranking military officers. That is what we will do, and we will do it not in a cowardly way but in a clear and a proportionate way.

ZARIF: As we choose.

DOKOUPIL: Elizabeth, what else did you learn from speaking with Zarif this morning?

PALMER: He insisted that any attacks would be on legitimate targets. I pressed him. I said, "What do you mean by that?" He told me to consult the law of war, the Geneva Convention. Legitimate targets are defined as military targets specifically or infrastructure that helps the military. I think that's just about all the answer we're going to get at this stage.

DOKOUPIL: It does narrow it down somewhat. Elizabeth Palmer in Tehran. Thank you so much.

ROBIN ROBERTS: Now to the escalating tensions with Iran. As we said, the Supreme Leader is prompting direct attacks against Americans. This as mourners pack into the streets for the funeral of Iran's top commander leading to a deadly stampede. Martha Raddatz is in Tehran where she just spoke with Iran's Foreign Minister. Good morning, Martha.

MARTHA RADDATZ: Good morning, Robin. This was the final day of the funeral procession and it turned tragic. The actual burial now postponed because of the crowds. This as the U.S. is warning ships in the Gulf of possible retaliatory attacks. This morning, a deadly stampede erupting at the funeral procession of General Soleimani in his hometown. Reports of dozens killed. Hundreds of thousands of mourners have been taking to the streets as Soleimani is finally laid to rest. This image from space capturing the massive crowds paying their respects to Soleimani, vowing revenge against the U.S. And this morning, in Iran's capital, the foreign minister saying in a speech the U.S. will receive the “definitive resolute response to its brazen criminal act in a place and at a time it hurts most.” Minister Zarif, who has been denied a Visa to attend a U.N. Meeting in New York this week, spoke with me shortly after those comments.

JAVAD ZARIF (Iran Foreign Affairs Minister): Iran is a very patient country. We will take our action after necessary deliberation, but I'm sure that it will be taken at a time of our choosing, not a time of the United States' choosing.

RADDATZ: There are reports that your supreme leader said it must be a direct proportional response carried out in the open. Does that mean Iran will acknowledge —

ZARIF: Once we do it? Yes, we will. We don't —  we don't carry cowardly acts of terror like the United States.

RADDATZ: I asked if civilians would be taken off the target list.

RADDATZ: U.S. bases across the area are bracing for attacks from the Iranian regime and now the Pentagon rushing to explain a leaked letter suggesting that U.S. troops are preparing to exit Iraq and that the U.S. “Respects Iraq's sovereign decision to order our departure.” The chairman of the Joint Chiefs of Staff saying the letter was only an unsigned draft and should not have been released calling it a mistake. Secretary of Defense Mark Esper saying there has been no decision for U.S. troops to leave Iraq despite that vote by the Iraqi Parliament to kick them out. The U.S. is sending those B-52s for backup in addition to 3500 additional troops to the mideast. All in a region that President Trump had vowed to get American troops out of. George?