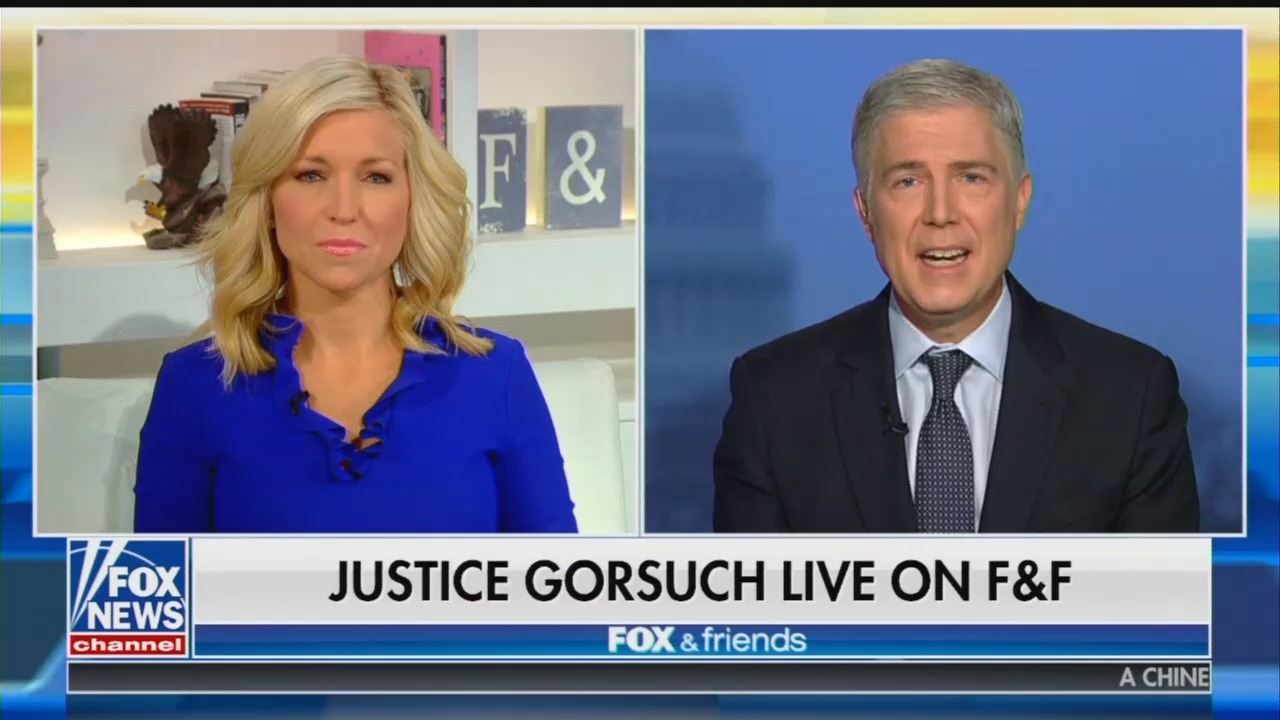 CNN host Brian Stelter is appalled that Supreme Court Justice Neil Gorsuch would go on “one of the most partisan shows on TV,” Fox & Friends. The tone deaf journalist has apparently forgot that liberal Supreme Court Justices like Stephen Breyer and Sonia Sotomayor have gone on equally liberal news outlets like CNN, NBC and CBS.

In his daily Reliable Sources e-mail newsletter on Tuesday, Stelter complained, “Why is a Supreme Court justice going on one of the most partisan shows on TV? How is it appropriate for him to try to goose sales of his three-month-old book by chatting on Fox & Friends?”  On Twitter, he whined: 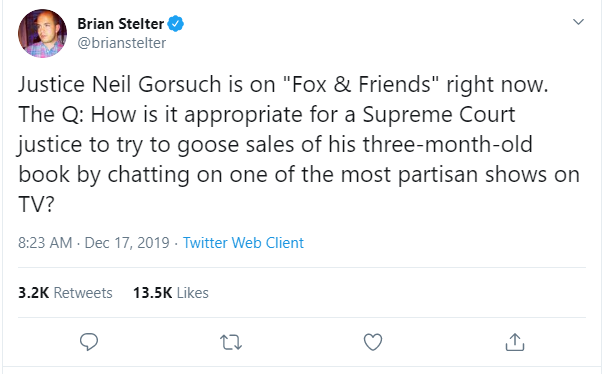 Has Stelter forgot that Sotomayor appeared on the September 4, 2018 edition of NBC’s Today? Not specifically mentioning Donald Trump, co-host Savannah Guthrie hinted, “Do you feel like our legal system, our constitutional system, separation of power, checks and balances, are those things under pressure today like they haven’t been in the past?”

Exactly one year later, NBC celebrated Sotomayor’s ten years on the Court with a big cake. “We’ve got a Supreme Court justice. Come on! How great is this job,” hailed Al Roker. Co-host Dylan Dreyer enthused, “This is so exciting. It is time now to catch up with our next guest, sitting Supreme Court Justice Sonia Sotomayor.”

Here's video of Gorsuch on Fox:

Lyndsey Fifield, Social Media Manager for The Heritage Foundation, tweeted this picture of other Supreme Court justices on partisan media. 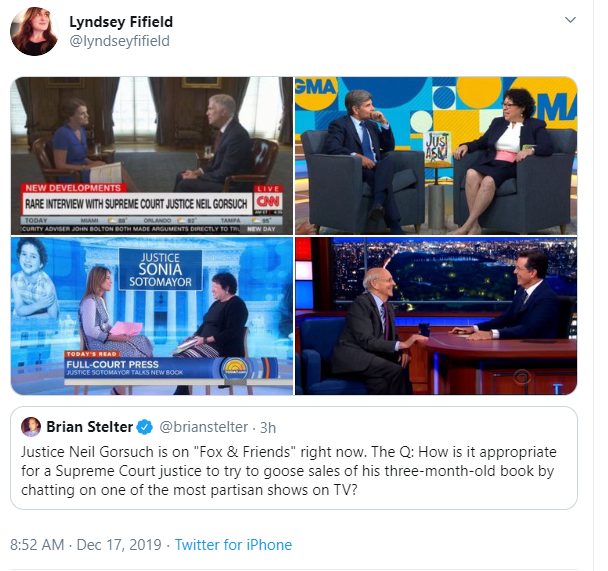 What sorts of offensive, right-wing topics did Gorsuch talk about when he appeared on Fox & Friends? Fidelity to the Constitution, humility: “This wonderful republic really is a miracle in human history and there's no greater privilege than the opportunity to spend a lifetime in its service.”

Hardly offensive material. Unless you're a CNN host, that is.

A partial transcript of the Fox and Friends segment is below. Click “expand” to read more:

AINSLEY EARHARDT: I know you clerked for Byron White. He was the first justice from Colorado where you're from, appointed by Kennedy and you tell a great story about, I watched an interview with you and I want you to share it with the viewers when you're walking down the hallway and saw the portraits of the other justices what was that conversation?

NEIL GORSUCH: Sure. So Byron white was maybe the most famous from Colorado of the 20th century, maybe ever. He had been a Rhodes Scholar, and led the NFL in rushing. He was the highest paid football player of his day, first in his class from Yale law school and clerked for the Supreme Court of the United States. He was Jack Kennedy's best friend and served on the Supreme Court for 31 years. He was my hero as a young man, and I got the opportunity to clerk with him, which was a dream come true.

One day we're walking down the main hall of the Supreme Court of the United States where the portraits of past justices hang on the walls and he leaned over to me and said, “Gorsuch, how many of these cats can you really name?” And I had a moment where I had to decide whether I was going to be honest or try to impress the old man. And I was honest and I told him, “About half, boss.” And he leaned over to me and he said, “Me too.” And then he said something that really surprised me. That surprised me enough but he next said, “And that's the way it should be. We're all forgotten soon enough....

Those words stuck with me because I thought nobody will ever forget Byron white, but the truth of the matter is, we're now many years after he's passed and he was right. and I came to realize he wasn't telling me something sad or melancholy. He was telling me something great and important that we're all part of something a lot deeper, more meaningful than ourselves. This wonderful republic really is a miracle in human history and there's no greater privilege than the opportunity to spend a lifetime in its service.