On Wednesday, NBC’s 3rd Hour Today show excitedly welcomed on liberal Supreme Court Justice Sonia Sotomayor to promote her new children’s book, Just Ask! Co-host Al Roker was beside himself with glee, declaring: “We’ve got a Supreme Court justice. Come on! How great is this job!” Later in the fawning segment, Sotomayor was even presented with a cake to celebrate her 10th anniversary on the high court.

“This is so exciting. It is time now to catch up with our next guest, sitting Supreme Court Justice Sonia Sotomayor,” proclaimed fellow co-host Dylan Dreyer as the interview began. She and the entire crew in the studio laughed as Roker giddily proclaimed what a “great job” he had being able to talk to the liberal jurist. “Still hard to believe I’m going to say, Justice Sotomayor, it’s so good to see you,” the star-struck Roker remarked as he introduced their guest.

During the discussion, Sotomayor explained her motivation for writing the book:

Kids are our future. People say that all the time, but what I tell kids is, “Do you understand what it means?” And most of the time I get little shakes of no. But I tell them, “Look at the mess that we adults have left you in the world. We have wars. We have climate problems. We have difficulties in Washington. We haven’t found the solution to our problems yet. We need you to do that.”

Besides talking about the book, Roker asked about the health of fellow liberal Justice Ruth Bader Ginsburg. There were no substantive questions about court decisions or cases that may considered in the upcoming term.

Instead, the segment wrapped up with Roker noting: “By the way, this is your tenth anniversary.” Dreyer chimed in: “Congratulations, we have a little – well, big – a very, very large cake for you.” One of the producers then brought out the massive cake that read, “Happy 10 Years Justice Sotomayor.” Dreyer continued: “Congratulations on ten years on the bench.” Sotomayor replied: “Oh my gosh, look at that! Thank you so much.” 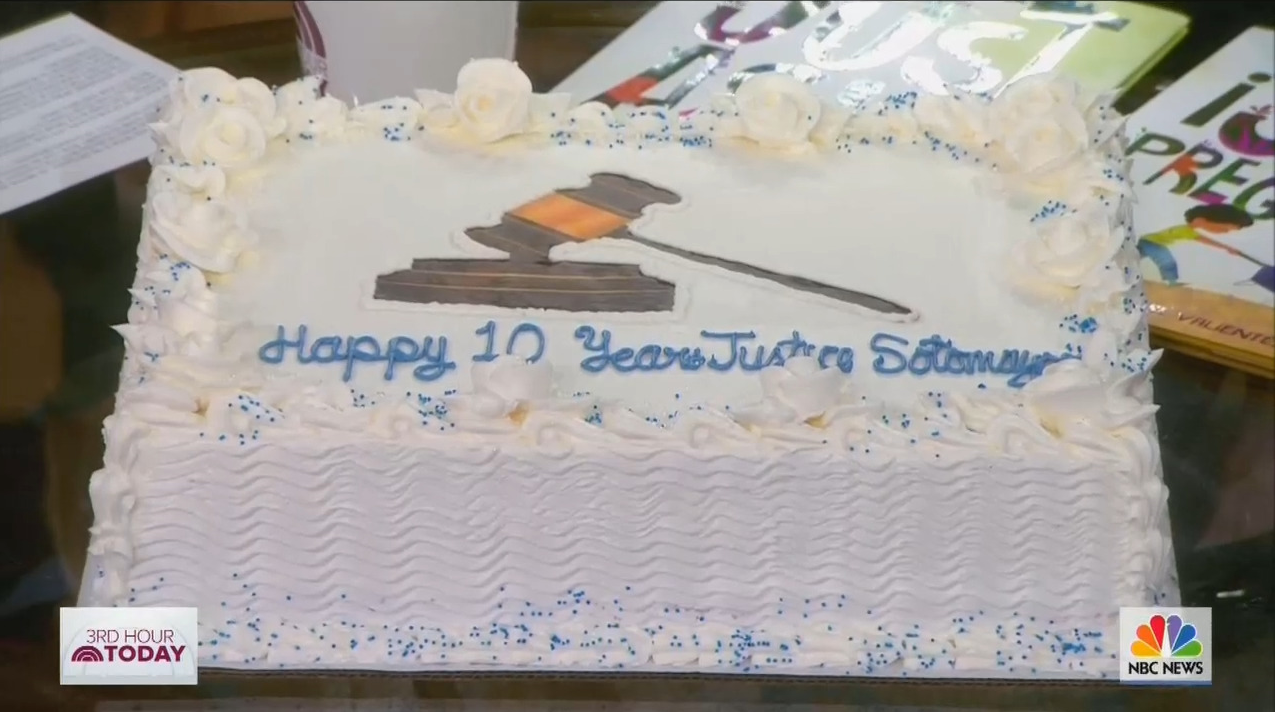 Of course the cake arrived shortly after Sotomayor explained that part of her motivation for the book was her lifelong struggle with diabetes. Though she assured the hosts that she could at least “taste” the cake.

The past ten years have featured constant media cheering for Sotomayor. When she was nominated to the court by President Obama in 2009, the Today show even ran defense for her and warned that any Republican opposition to her would “cost” the GOP politically.

To date, conservative Supreme Court Justice Clarence Thomas has yet to receive an anniversary cake on the NBC morning show and it’s hard to imagine Justice Brett Kavanaugh will being getting one to celebrate his one-year anniversary on the high court.

This is not the first time Roker has gone gaga for a left-wing Supreme Court justice. During the 9:00 a.m. ET hour of the Today show in 2018, Roker gushed over Justice Ginsburg announcing she had no plans to retire: “I don’t think there isn’t a person out there who doesn’t love Ruth Bader Ginsburg!”

On Tuesday, Sotomayor was treated to another substance-free appearance on ABC’s Good Morning America, where children in the audience were invited to ask her questions designed to promote her book.