Credit to the journalists at CBS for at least having an alternative voice on. But the hosts at CBS This Morning seemed surprised as Reince Priebus dismissed the Democratic Impeachment efforts. Anthony Mason wondered, “We've heard now a dozen public officials, some of them the President's own appointees, in testimony express serious concerns about his conduct. Should we not believe these career public servants?”

Priebus responded, “If you're going to impeach a president on the charge of bribery, you actually have to link the direct proof of corrupt intent at the time of the exchange.” After co-host Tony Dokoupil challenged Donald Trump to testify, Priebus noted, “Gordon Sondland said himself that the President told him he wants nothing, there's no quid pro quo.”

Co-host Gayle King quizzed, “Do you think the President of the United States should be held to a higher standard than the rest of us? The former chief of staff to Trump dismissed, “This wasn't a fair trial, and it's not —  it's not a trial. It's just a political exercise.”

A complete transcript is below. Click “expand” to read more. 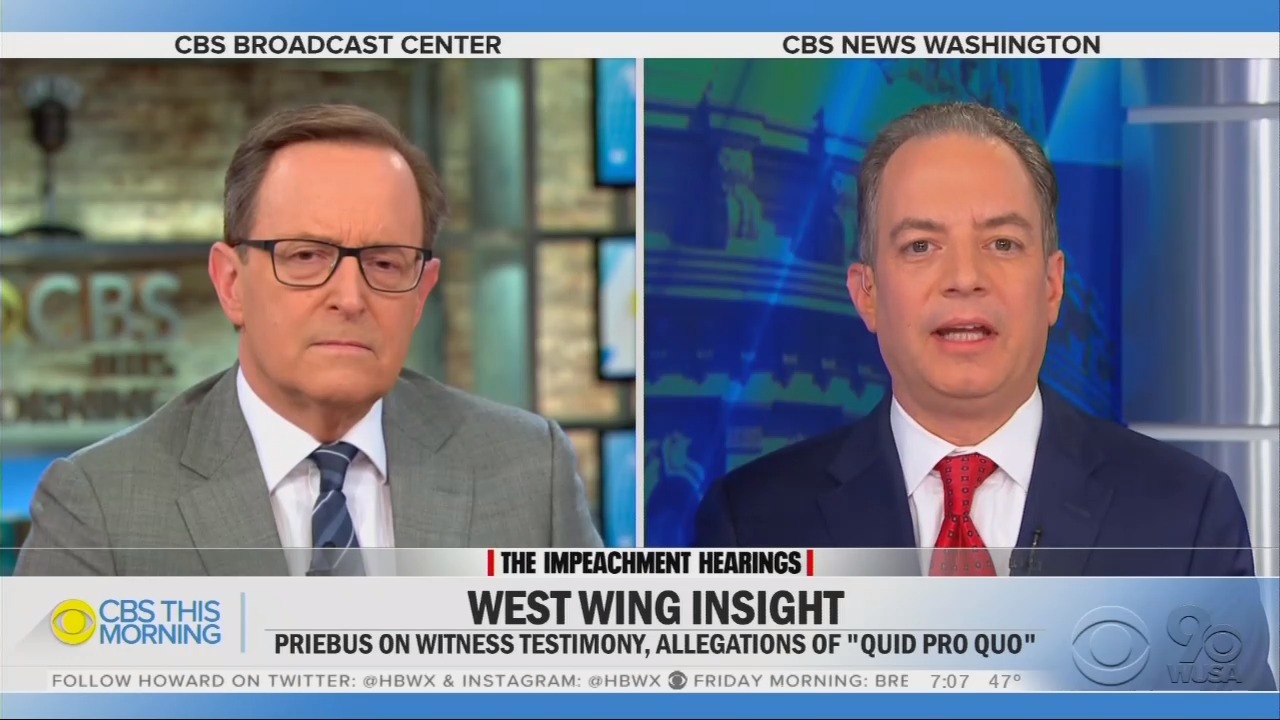 ANTHONY MASON: Reince Priebus was chief of staff to President Trump for about six months of his presidency. He's with us now. Good morning, Mr. Priebus.

MASON: We've heard now a dozen public officials, some of them the President's own appointees, in testimony express serious concerns about his conduct. Should we not believe these career public servants?

PRIEBUS: Well, I mean, you can have concerns. But if you're going to impeach a president on the charge of bribery, you actually have to link the direct proof of corrupt intent at the time of the exchange. And so, even the clips there that you played, even the gentleman said, “Well, I overheard the President say investigation.” But what they didn't put into the record and Gordon Sondland couldn’t do it either is the actual comment that are they going to do the investigations, and if they don't do the investigations, then they don't get the money. That was never —  it was never born out in the hearings, so they never had the direct evidence. They didn't have Nixon on tape saying "I'm directing this cover-up." They didn't have Clinton lying under oath. They didn’t have the dress.

MASON: But how do so many people come to the same conclusion?

PRIEBUS: Well, they didn't really come to a conclusion. Look, even Gordon Sondland, talked to the president like 20 times. He was asked, “Did anyone on this planet, did anyone on the planet tell you that military aid was held up in exchange for the investigation?” And his answer was no. Here's the problem — I mean, you can have all the smoke in the world, but if you're going to impeach a president and you're going to convict him, you actually have to have the direct proof. They haven't done it. They haven't —  they haven't put the right witnesses up.

TONY DOKOUPIL: Mr. Priebus, if what you're looking for is the most direct kind of proof available, I suppose that would come from the President himself. Are you, therefore, arguing that the President should take an oath to tell the truth, sits before Congress and testify?

PRIEBUS: Well, no. I'm not. I mean, the President's already —  his own words have already been put out there —

DOKOUPIL: But not under oath. That's a key part of this.

PRIEBUS: But the folks —  Gordon Sondland said himself that the President told him he wants nothing, there's no quid pro quo.

DOKOUPIL: You know there's a pattern —

PRIEBUS: Wasn't conditioned on anything. And the Ukrainians had said the same thing. That's why, by the way, that's why this is why the White House actually wants to go to a trial in the Senate. And so you know, the —

GAYLE KING: But Reince, you have to make the point that the President said there was no quid pro quo, and he wanted nothing after it was revealed there was a whistle-blower's report. Let's move to something else.

PRIEBUS: But Gayle, how do you know that it wasn't because Ron Johnson came back from the inauguration in Ukraine and called the President and said, "I think you guys should release the money," and he released the money. My only point is that you make a point which is a a fair point. There's another piece of evidence that says, well, maybe it was because someone called the President, told him to release the money. That's what fair trials are supposed to bear out. This wasn't a fair trial, and it's not —  it's not a trial. It's just a political exercise.

KING: That's a matter of debate for sure. Do you think the President of the United States should be held to a higher standard than the rest of us?

KING: Doesn't the President of the United States have some responsibility to be held —

PRIEBUS: That's a different question. We're —  we're answering the question of did the President commit what he's been charged of, which is bribery, and was the trial in the House, did that bear that out? And my —  I'm only analyzing that, and the American people agree because the President's approval ratings are higher than they've been in years. I saw a poll yesterday that showed in Wisconsin that only 40 percent, now this is a 50/50 state, but only 40 percent of the people in Wisconsin support impeachment which is why the President wants to go to trial in the Senate instead of just doing a motion to dismiss.

KING: He was meeting with Republican senators yesterday. Is he trying to lay out strategy?

PRIEBUS: I think the —  the House trial, what people watched over there was a trial orchestrated by the Democrats. Now, the Republicans are going to orchestrate a trial. It's going to be their turn to put witnesses up and cross examine people in the Senate under their rules and under their watch, and I think the President's feeling very bullish about the idea of shutting all of this down under rules set by the Republicans now. And so I think the Democrats took their best shot. And I just —  I'm sorry, but for them, you know, they swung, and I think they missed.

KING: Okay. The story continues for sure. We thank you so much for taking the time.