CBS Sympathizes: Poor Kamala Will Have to Remain ‘Silent’ as Impeachment Juror 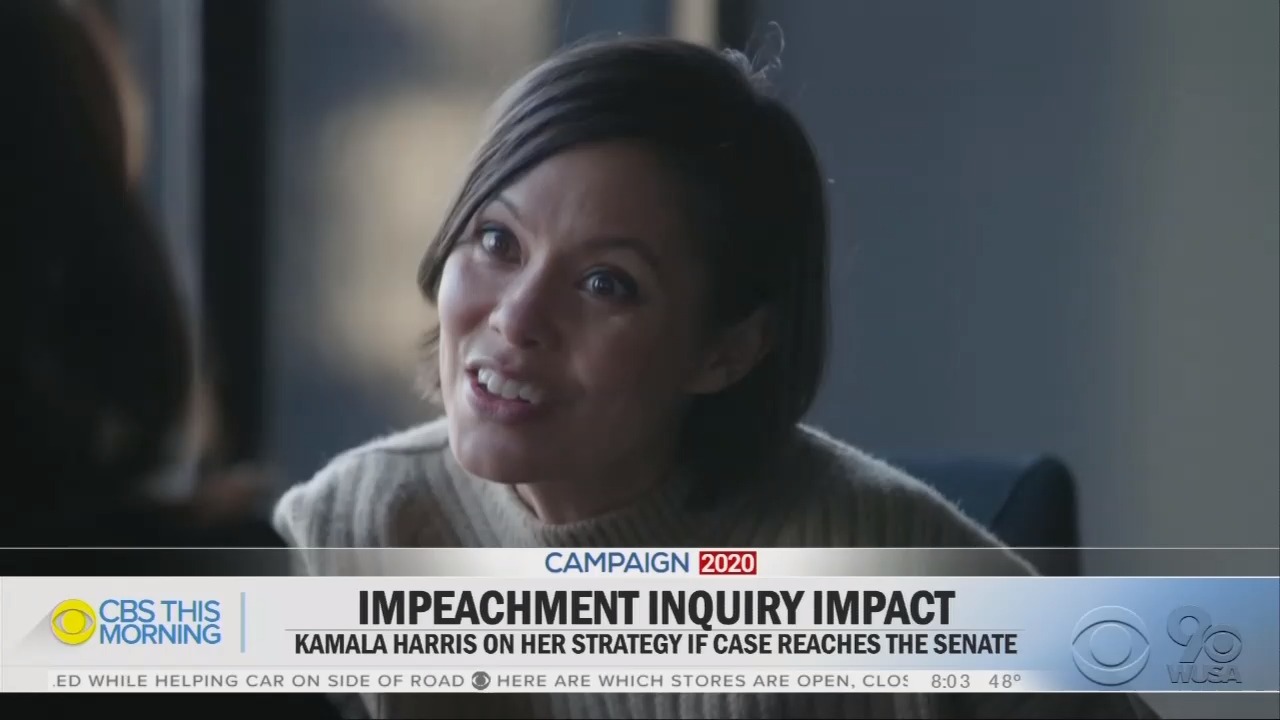 What’s the first question you would ask Kamala Harris about being a juror in the potential impeachment trial of Donald Trump? If it was, “How can you be impartial since you’ve already made a decision in the case,” you clearly aren’t a journalist on CBS This Morning. Liberal Alex Wagner instead sympathized with the difficulty for the 2020 Democrat to stay quiet.

In an interview that will also be broadcast on Showtime’s The Circus, Wagner wondered, “You're going to have to sit silently as a juror. Have you thought about the sort of psychology of that?” The Democrat responded with self pity: “I've thought about my own psychology.”

Wagner fretted, “In the meantime, you're going to practice self-discipline?” In the entire CBS segment NO ONE asked how Harris could be an objective juror having already made up her mind. (Harris said in October that impeaching Trump “shouldn’t take very long” because “we have a confession.”)

Instead, co-host Tony Dokoupil marveled, “So, it is difficult to imagine Kamala Harris staying silent as a juror.” Wagner seemed amazed at the dicipline of not getting up and screaming during the hearings: “And yet, her role when it goes to the Senate is going to be to sit quietly as a juror and not say anything.”

It’s really quite amazing that CBS treats Wagner as though she were some neutral reporter. The former MSNBC host, for instance, is on record as flatly declaring, “I think get rid of the Second Amendment, the right to bear arms.”

Wagner offered a charitable description of Harris’s faultering campaign, touting a goal of coming in “third or fourth” in Iowa and not winning New Hampshire.

They're going all in, and then the hope is there is some momentum, some lift from a strong finish, probably not first or second but maybe third or fourth.

A transcript of the segment in below:

TONY DOKOUPIL: The impeachment proceedings on Capitol Hill could eventually pull some senators running for president from the campaign trail. And that includes Kamala Harris. Her national poll numbers are falling and she closed all three of her field offices in New Hampshire recently. CBS News special correspondent Alex Wagner interviewed the California senator for the Showtime series The Circus. She discussed her strategy if impeachment reaches the Senate.

ALEX WAGNER: You're going to have to sit silently as a juror. Have you thought about the sort of psychology of that?

KAMALA HARRIS: Yeah, I've thought about my own psychology. I mean, it's going to be —  I've never been able to sit on my hands. And so we'll see. There is a lot of this that has precedent, and some that does not.

WAGNER: In the meantime, you're going to practice self-discipline?

WAGNER: Good morning, guys. Good to see you in person.

DOKOUPIL: So, it is difficult to imagine Kamala Harris staying silent as a juror.

WAGNER: I know. It is a fundamental question. There are six Democrats who are senators who are also running for president. Kamala Harris is a former prosecutor. She had said "I am the person that knows how these impeachment proceedings should run." And yet, her role when it goes to the Senate is going to be to sit quietly as a juror and not say anything.

GAYLE KING: Can she do that?

WAGNER: She's saying, “I thought about this, it's going to be hard to sit on my hands,” to say nothing of the fact that all these Democrats want to be in Iowa at precisely the moment that an impeachment trial is going to be unfolding.

ANTHONY MASON: She shook up the campaign staff, laid off people and shifted a lot of resources to Iowa. What does that say about where she is?

WAGNER: Look, the campaign is very clear. If they don't do well in Iowa, they have problems. They're going all in, and then the hope is there is some momentum, some lift from a strong finish, probably not first or second but maybe third or fourth. And they can use the momentum through South Carolina which is really where the Harris campaign thinks they will do well. They have effectively, I believe they will not say this publicly, dismissed whatever is going to happen in New Hampshire because Bernie Sanders and Elizabeth Warren are from neighboring states. And they think the south will be good for this campaign. The question is whether they have the resources to get there.

KING: So, the impeachment inquiry hearings open to the public next week starting on Wednesday. What's the significance of that? Since I think so many people feel, “I've already heard everything.

WAGNER: Well, I think that there's something -- there's a difference between reading about closed door depositions and seeing them on your television.

KING: And hearing the people say the words —

WAGNER: And hearing people say the words "I did this," "The President told me to do this." That is meaningful. Republicans have been pressing for, you know, open-door hearings. They are getting what they wanted. There is going to be grandstanding. Republicans feel like they are under pressure from the White House to mount a more strident and public defense. This will be their opportunity. Democrats no doubt feel like the more information that the American public is presented with the more their case is open and shut.

DOKOUPIL: Meanwhile, the Republican defense of the President is, shall we say, evolving.

WAGNER: Yes. That is a euphemism.

DOKOUPIL: What is their strategy here?

WAGNER: It's threefold at present. One, you have a group of Republicans saying there's nothing to see, there was no quid pro quo, this is a non- issue. Two is, you know what, Lindsey Graham has taken this tack, the White House didn't have a strategy that was articulated. There was no quid pro quo because they weren't organized enough for it. And then the third piece is, there was a quid pro quo, but it doesn't rise to the level of an impeachable offense. They have not found ground to stand on in terms it was unified strategy, Tony.

MASON: These public hearings are going to be tricky, aren't they? For moderate Democrats and moderate Republicans?

WAGNER: Yeah. If you look at the polling that came out this week, support for impeachment is under water in key battleground states. That's Michigan, Wisconsin, Pennsylvania, Florida, North Carolina, Arizona. That is a problem for moderate Democrats who effectively won in 2018 and handed the Speaker's gavel to Nancy Pelosi. They have got a jockey a linewhere they are performing their constitutional duty but also do not appear to be overtly partisan. Because voters back at home, I've talked to these voters, they still very much care about jobs, health care, trade, the environment. Impeachment is not — it is not the thing that is animating kitchen table discussions.