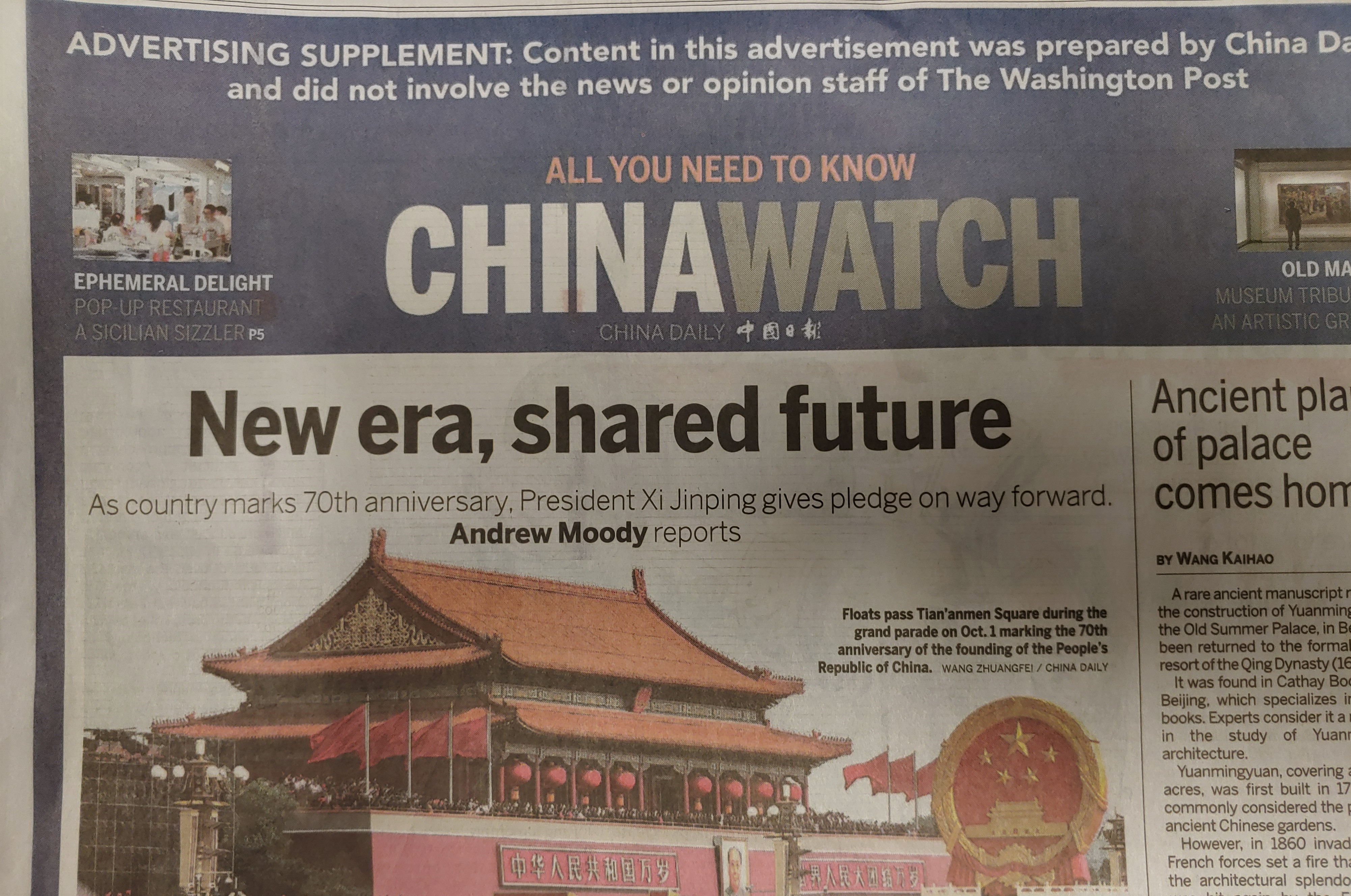 In case you were wondering, The Washington Post is still publishing Communist Chinese propaganda. The paper on Wednesday featured a supplemental section entitled ChinaWatch by the publicity department of the country’s repressive regime, China Daily. The brutal crackdown on Hong Kong apparently hasn’t caused The Post to reconsider this advertising arrangement.

Instead, the front section of the October 30th version featured a story literally put together by communists. It began, “China in its New Era has an increasingly significant role on the world stage as it marks the 70th anniversary of the founding of the People's Republic.” A quote by China’s president, XI Jingping, followed, praising mass killer Mao Zedong:

Seventy years ago on this day, Comrade Mao Zedong solemnly declared here to the world that the People’s Republic of China was founded and the Chinese people had stood up.

As though it’s a press release, writer Andrew Moody parroted, “The Chinese people, including diverse ethnic groups, have made great acheivements over the lat 70 years through concerted efforts and ardous struggle, XI said.”

Somehow, Hong Kong and the millions killed by Mao never came up.

The Post regularly publishes the ChinaWatch supplement in its print edition. A note at the top reads: “Content in this advertisement was prepared by China Daily, and did not involve the news or opinion staff of The Washington Post.” The font and frequency of this disclaimer have increased as the paper draws more and more criticism.

However, even when The Post calls out China for its repression of Hong Kong, the decision to make a profit off the Chinese communists undercuts standing against repression.

Clearly, The Post knows how this all looks. Though many of the articles are boring and non-offensive (“Chinese wines and spirits begin to please palates in far flung places”), others are not. Some of more troubling ones don’t appear in the print supplement. Here's one from the online version attacking those who would dare stand up to the Chinese attack on free speech.

LeBron James of the National Basketball Association's Los Angeles Lakers demonstrated tact and thoughtfulness when he broke his silence on Houston Rockets manager Daryl Morey's tweet in support of the Hong Kong protests, lodging no opinion on the protests themselves and calling the move by Morey ill-advised. "I believe he wasn't education on the situation, and he spoke," James said.

Here, the 4-time MVP was probably right; pro-Hong Kong posts on Western social media are something of a bandwagon, and plenty of celebrities have vocalized their approval of the protests without fully comprehending the situation. James was, in essence, saying "no investigation, no right to speak." Considering the consequences of Morey's hip-fired tweet —an enormous public backlash in China — that seems like pretty sage advice.

The Post should be ashamed of publishing this advertising supplement. For a liberal paper that has warned against the threats of big business, The Washington Post sure seems to prize money most of all.