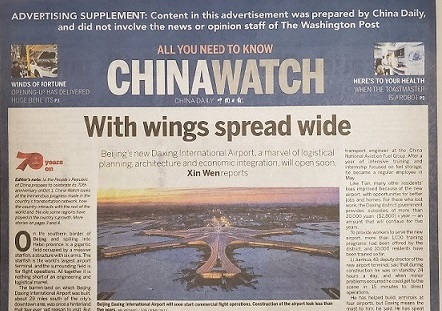 Tuesday’s “Democracy Dies in Darkness” Washington Post print edition ran a strongly-worded editorial condemning the supposedly woke NBA for showing more interest in pleasuring the murderous Chinese regime than defending freedom. But there’s a catch to all this.

First the editorial. The paper gushed that Commissioner Adam Silver and the players “have a well-earned reputation for candor about politics and social matters,” but it’s been sullied by capitulating and apologizing profusely to the Chinese after Houston Rockets GM Daryl Morey expressed support for the Hong Kong protesters.

The reason? As anti-Semitic Congresswoman Ilhan Omar (D-MN) once said, “it’s all about the Benjamins.” The editorial board added (click “expand”):

China is attempting to enforce its version of the truth all around the world — bullying Chinese-language newspapers in Canada and the United States, patrolling the speech of its students abroad, demanding that foreign airlines and hotel chains wipe Taiwan off their maps. Some of its targets don’t have the wherewithal to stand up to this assault — which is why the NBA’s cravenness is so damaging. With all its financial muscle, its enormous popularity and its moral preening, if the NBA can cave so easily, who will resist the censorship of the Communist dictators?

Those dictators will say, as usual, that Mr. Morey’s tweet offended the “Chinese people.” But because the Chinese people themselves are not free to speak out — since anyone in China expressing support for the Hong Kong movement is also punished — those claims should not be taken seriously. And if Mr. Silver really believes that “you really do have to stand for something” — what will it be, if not freedom of expression in Hong Kong, in Houston and around the world?

Speaking of “freedom of expression” and “newspapers,” the editorial board should call on their employer to clean up its own act. Since at least 2010, the sales department has exhibited a penchant for periodically offering an insert entitled “China Watch,” which is produced by the English-language communist mouthpiece China Daily.

Whether it’s Letters to the Editor, The Atlantic, Tucker Carlson during his infamous duel with Erik Wemple, the Epoch Times, FoxNews.com, our own Tim Graham, Mark Hemingway, Raheem Kassam, or even President Donald Trump to name a few, The Post and other papers been lambasted for allowing authoritarian propaganda to seep their operations.

Recent editions have included disclaimers with larger fonts and some all-caps. The current disclaimer is featured at the top of every page and reads: “ADVERTISING SUPPLEMENT: Content in this advertisement was prepared by China Daily, and did not involve the news or opinion staff of The Washington Post.”

Sure, Marty Baron, Fred Hiatt, and the rest of The Post’s leaders on the journalism side (including even White House bureau chief Phil Rucker) have no role in their sales department allowing “China Watch” to be published and included in print editions, but if the paper truly wants to take a stand and not allow democracy to die in darkness, perhaps they actually grow a spine to tell their colleagues on the business side to cut it out.

In other words, The Post’s position isn’t entirely far off of where the NBA finds itself, proclaiming its wokeness and support for human rights while simultaneously enriching itself with Chinese cash.