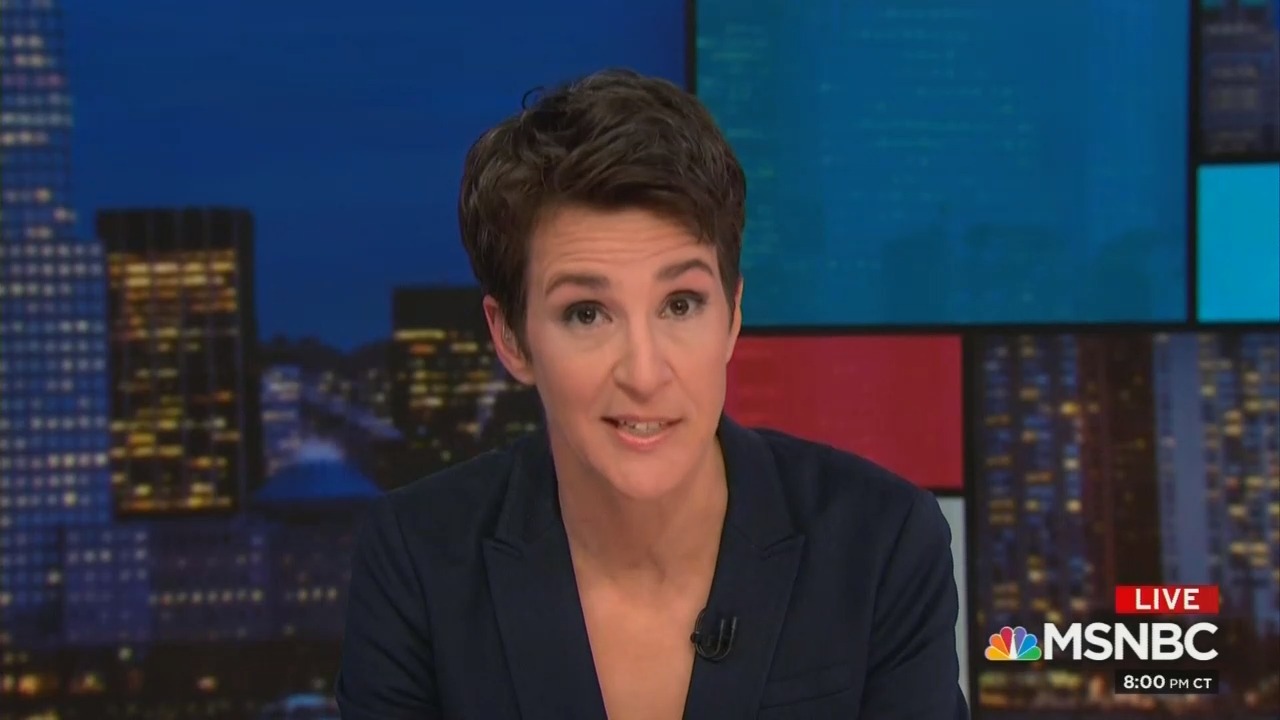 If you happen to be drinking coffee and reading the print New York Times this coming Sunday, a word of warning: Put your drink down first or you might gag on the long, very long, profile of “oracle” Rachel Maddow. The online version by Amanda Hess trumpeted, “This Is the Moment Rachel Maddow Has Been Waiting For.”

The 6,102-word article features one paragraph fighting with another for the most hyperbolic, admiring praise. Hess rhapsodized about the far-left love for the MSNBC host: “Over the past three [years], her figure has ascended, in the liberal imagination, from beloved cable-news host to a kind of oracle for the age of Trump.”

The journalist highlighted Maddow’s not-so broad appeal, from fans accosting her in liberal New York City all the way to... liberal San Francisco. Does the idea of Rachel Maddow-themed birthday parties seem a bit much? Not, apparently, to the Times.

Recently, I went to dinner at the home of Rebecca Kee, a preschool principal in San Francisco who turned to Maddow in her depression and confusion over the 2016 election. I brought a bottle of rosé, and she poured it into glasses decorated with charms that featured Russia-investigation figures on one side and characters from “Star Trek: The Next Generation” on the other. I sipped from the Hope Hicks/Beverly Crusher glass, and we watched Maddow’s show over veggie enchiladas. “I think of her as a news doula: You know the news is going to be painful no matter what, so we might as well have someone who helps us survive it,” Kee told me. Last year, Kee had a Maddow-themed birthday party, at which her friends and her two young sons put on big black glasses and slicked their hair to the side. Also in attendance was a life-size cardboard cutout of Maddow, which is now in storage so as not to startle guests.

Readers are told, again and again, that Maddow is the smart voice on cable news, not like those obnoxious conservatives: “If Fox News’s biggest star, Sean Hannity, specializes in angry rants, magnifying internet conspiracy theories and coordinating with Trump, Maddow deals in high-toned if sometimes exasperated argumentation.”

Hess insisted that MSNBC, unlike that right-wing Fox, only drifted into an ideology.

Unlike Fox News, which was formed in the gimlet eye of the Republican operative Roger Ailes, MSNBC was not conceived with a political orientation. Over the years it has tried on the costumes of liberalism and conservatism and straight-news-ism. Its ideological reputation arose somewhat accidentally, when Keith Olbermann blew a gasket during Hurricane Katrina and eviscerated President George W. Bush, proving that there was an audience for the scorched-earth liberal rant.

But that's not totally true. While MSNBC has certainly gone father and farther left, the liberal rage, including from the aforementioned Olbermann, was there from the beginning. Here’s him in 1998 comparing Ken Starr to Nazi Heinrich Himmler:

"Can Ken Starr ignore the apparent breadth of the sympathetic response to the President’s speech? Facially, it finally dawned on me that the person Ken Starr has reminded me of facially all this time was Heinrich Himmler, including the glasses. If he now pursues the President of the United States, who, however flawed his apology was, came out and invoked God, family, his daughter, a political conspiracy and everything but the kitchen sink, would not there be some sort of comparison to a persecutor as opposed to a prosecutor for Mr. Starr?"

Later, the Times journalist contrasted Maddow to Fox, insisting that the host “does not see herself as a leader of the left or an adversary of Trump in any way."

The worlds of Fox News and MSNBC don’t operate under the same logic, or even speak the same language. Hannity has mounted the president’s podium at a rally, and he has the president’s ear. Last week, Trump tweeted out a Hannity clip as self-defense that featured a scrolling list of “PRESIDENT TRUMP’S ACCOMPLISHMENTS.” But Maddow is uninterested in cultivating such power relationships. She does not see herself as a leader of the left or an adversary of Trump in any way.

Hess seriously tries to insist that Maddow is no liberal partisan. The source for this? Rachel Maddow.

Since Trump’s inauguration, an anxiety has arisen among the media commentariat over Maddow’s role. When NBC selected her to help moderate the first Democratic presidential debate, [Paul]Farhi [of the Washington Post] raised an eyebrow. The Times distanced its reporters who cover political subjects from her program over what it viewed as a “sharply opinionated” orientation. But these critiques do not track with her sense of self. She votes in Massachusetts, where she and Mikula retreat on the weekends, but says she registers a party affiliation only shortly before the primaries and then unregisters shortly afterward.

This past weekend, the out of touch Times featured Bill Maher, a man who cheered the death of David Koch, to call for civility.