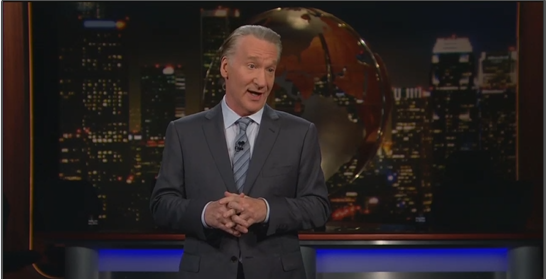 Who is this Bill Maher and what has he done with the hateful liberal who has a TV show on HBO? The Real Time host talked to the New York Times Magazine on Sunday and ridiculously declared, “We live in an era where I don’t think people’s main focus is the truth and/or sussing out something valuable or teachable. We live in a time in which people are more concerned with scalps and clicks.”

Lamenting that truth, teaching, and civility aren't prized? This is a man who in August delighted in the death of David Koch, saying, “Fuck him... I’m glad he’s dead.... I hope the end was painful.” The other Maher, the one interviewed in the Times, called for reasoned debate:

You have to find a way to begin with what you share and then explore why you differ so vehemently on other issues, and that’s what we seem to have lost the ability to do. I don’t see a lot of desire for people to talk to each other, to accept that, “O.K., this person doesn’t agree with me on a lot of stuff, but I don’t have to think he’s a monster.” We want to beat our chests and vanquish the other side. Compromise seems like a dead concept.

Portraying your opponents as monsters is wrong? This is the same HBO host who said that Donald Trump gets “story by” credit on the El Paso shooting and compared Trump voters to Nazis.

Of course, Times magazine interviewer David Marchese never challenged Maher with these inconvenient facts. Instead, the host went on preening on about civility, truth, and moderation. It’s not as though Maher has stayed consistent. Just prior to the 2016 election, he admitted to crying wolf over 2012 nominee Mitt Romney, saying:

I know liberals made a big mistake because we attacked your boy, Bush, like he was the end of the world, and he wasn't. And Mitt Romney, we attacked that way. I gave Obama a million dollars, I was so afraid of Mitt Romney. Mitt Romney wouldn't have changed my life that much or yours. Or John McCain. They were honorable men who we disagreed with, and we should have kept it that way. So we cried wolf, and that was wrong.

It seems as though Maher now hates the Frankenstein-like monster modern liberalism in the media has created. Regarding free speech, he told the Times:

Now on the left we have the one true opinion. If you go against that, you do so at your peril. That’s why the air on the left is becoming stale. I railed for years against the Fox News bubble, and that is as strong as ever, but I didn’t think it would get this bad on the left. Comedians are afraid to make jokes in clubs, because somebody will tape it and send it out on Twitter and get the mob after you.

On September 24, Foster Friess wrote in The Washington Times of Maher’s attacks on David Koch:

When Bill Maher retires to his rocking chair, will he find delight in knowing his estimated $100 million net worth came by ridiculing and denigrating his fellow human beings?

In all my encounters with David Koch, I only saw kindness, gentleness, civility and love of his fellow man. Having had a brush with death in his youth, he devoted his life to helping others, particularly the disadvantaged.