Journalists still haven’t lost the thrill they have for Hillary Clinton. The 2016 candidate is doing a book tour and appeared on Tuesday’s Good Morning America. Amy Robach fawned over the Democrat, gushing, “What’s the gutsiest thing you’ve ever done?” The GMA guest co-host hesitantly brought up Clinton’s private e-mail server, but not with much enthusiasm or interest.

Promoting The Book of Gutsy Women, Robach offered softballs such as this one: “You highlight over 100 women. How did you go about picking which women to highlight? That’s gotta be tough.” To Chelsea, she cheered, “You guys look like you have an amazing relationship. What was it like though to work on a book with your mom?”

Regarding the news that the Trump administration is investigating e-mail records related to Clinton’s private server, Robach presented the scandal as just another annoyance: “Your e-mails in the headlines once again... Here we go again.” She added, “The administration is investigating dozens of current and former State Department officials for what they sent you. Have you personally been questioned about this?”

That was it. In contrast, The Washington Post explained the latest twist in the controversy:

As many as 130 officials have been contacted in recent weeks by State Department investigators — a list that includes senior officials who reported directly to Clinton as well as others in lower-level jobs whose emails were at some point relayed to her inbox, said current and former State Department officials. Those targeted were notified that emails they sent years ago have been retroactively classified and now constitute potential security violations, according to letters reviewed by The Washington Post.

In virtually all of the cases, potentially sensitive information, now recategorized as “classified,” was sent to Clinton’s unsecure inbox.

Of course, Robach wasn’t interested in this. Instead, she stuck to softball talking points:

AMY ROBACH: We’re about out of time. But can I ask what's the gutsiest thing you've ever done?

HILLARY CLINTON: Oh, boy, I think the gutsiest thing personally make the decision to stay in my marriage. Publicly, politically run for president. And keep going. Just get up every day and keep going. 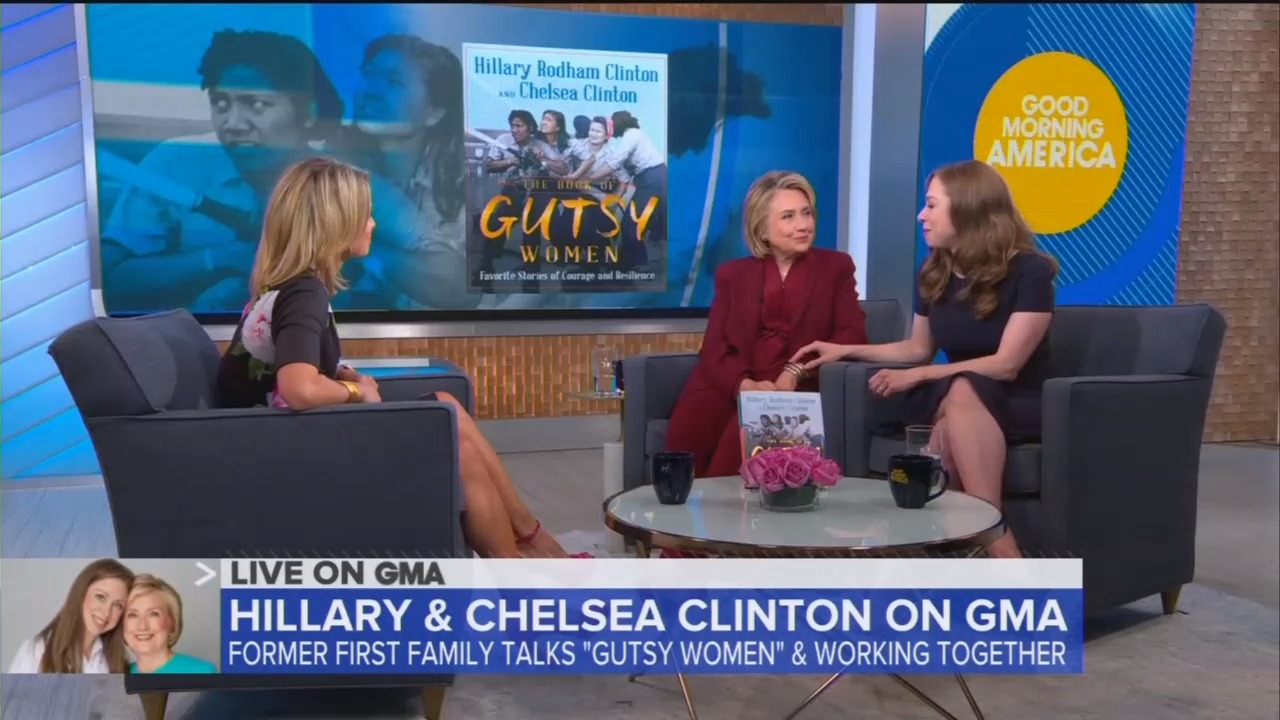 AMY ROBACH: We are back now with former Democratic presidential nominee, secretary of State, Senator and First Lady, Hillary Rodham Clinton and her daughter, author and activist Chelsea Clinton. The two have co-authored a new book called The Book of Gutsy Women, highlighting women who inspired them throughout their lives. Welcome. Thank you for being with us.

HILLARY CLINTON: Thank you so much, Amy.

ROBACH: We're going to be talking about the book in just a moment, but we obviously need to ask you about a couple of big headlines that have been in the news cycle here. First, the launch of the impeachment inquiry into President Trump, of course. You witnessed firsthand two impeachments, one as part of the House judiciary staff and as First Lady. I know you've said that you support impeachment but do you have concerns that the Democrats may be overreaching on this?

HILLARY CLINTON: We don't have concerns about that because I think the evidence concerning Ukraine is so dramatic and irrefutable because it came right out of the White House. So let the impeachment inquiry proceed. I know that they will do a thoughtful, thorough job. Nobody should jump to any conclusions.

ROBACH: What do you think about President Trump calling for the accuser, for the whistle-blower to be outed?

HILLARY CLINTON: I think that's really dangerous. From everything we know and we don't know much, this is an experienced person who saw things that bothered him. That's what the whole whistle-blower statute is for and it is to protect their identity and I understand he's going to testify and we'll let the process unfold.

ROBACH: How do you see it affecting the 2020 election?

HILLARY CLINTON: I don't know yet but I think there was no choice. Speaker Pelosi was reluctant as we all know, but what I hope the Democrats will do is not only proceed in a very deliberative way on the impeachment inquiry, but tell the American people what they've accomplished. They passed legislation on gun safety, improving health, lowering prescription drug costs, doing so many things that the American people really want and need and it goes to the Senate and dies, so I think the Democrats have to go on two tracks here but they will do that.

ROBACH: Your emails in the headlines once again with reports that —

HILLARY CLINTON: Can you believe that?

ROBACH: Here we go again. The administration is investigating dozens of current and former State Department officials for what they sent you. Have you personally been questioned about this?

HILLARY CLINTON: No, and, look, I think it's an unfortunate diversion. You go and you talk to people who have been experienced diplomats for many years and then you retroactively classify what they said ten years ago, I think it's really a shame that they're doing that and hopefully people will not be distracted.

ROBACH: Well, here's today's headline. Your book is out. The Book of Gutsy Women that you co-authored with your daughter. You highlight over 100 women. How did you go about picking which women to highlight? That’s gotta be tough.

HILLARY CLINTON: We've been talking about women who inspire us our whole lives together.

CHELSEA CLINTON: I mean. so many of my earliest memories are my mother talking about women who inspired her. Some fictional like Nancy Drew and some very real like Shirley Chisolm and Geraldine Ferraro. So in many ways, it's just a continuation of that conversation we started more 30 years ago.

HILLARY CLINTON: I really want to highlight one of the women in the book today because you do such a great job here on Good Morning America highlighting breast cancer awareness month. And Betty Ford, the former First Lady is in there because when I was a young girl, my mother's best friend who lived across the street got breast cancer, nobody would talk about it, Amy. Nobody would say the words breast cancer. Nobody. And so I knew my mother was going over every afternoon to spend time with her. She eventually passed away. And it was not until Betty Ford courageously, with a lot of guts, not only had her mastectomy, but had herself photographed in the hospital room with her husband then-President Ford by her side and went on to talk about it and I think —  I really believe saved so many lives.

ROBACH: Oh, without a doubt. I mean, we have to talk about it. Awareness is key.

ROBACH: To prevention and hopefully eventually treatment. I have to ask, I mean you guys look like you have an amazing relationship. What was it like though to work on a book with your mom? You've each written six book, correct?

CHELSEA CLINTON: Oh, goodness. Oh, so much fun. It was just such a joy. We laughed a lot. We laugh a lot as you can tell. And it's just so much fun to continue to learn about my mom and to learn with her and to have created something together.

HILLARY CLINTON: Okay, true confessions. I really frustrated by daughter because I write in longhand and I always have when it comes to something long. For memos and notes and obviously other —

ROBACH [Picture on screen.] Wow. There’s an example that Chelsea had to decipher.

CHELSEA CLINTON: She would take pictures, Amy. And then kind of send me to prove she had made progress.

ROBACH: I love it.

HILLARY CLINTON: My only excuse I have is that Barack Obama also writes in longhand so I'm in very good company.

ROBACH: We’re about out of time. But can I ask what's the gutsiest thing you've ever done?

HILLARY CLINTON: Oh, boy, I think the gutsiest thing personally make the decision to stay in my marriage. Publicly, politically run for president. And keep going. Just get up every day and keep going.

ROBACH: I love it. Chelsea, how about you?

CHELSEA CLINTON:  Oh, goodness, I think I'm so overwhelmed by my mother's answer that I'm a bit out of words. And I'm just so proud to be her daughter. But my most important entity is now as my three kids' mom so I'll just try to be gutsy every day, Amy. Thank you.

ROBACH: I love that.  Words to live by. Thank you both so much.