CBS This Morning analyst Jonathan Turley offered an unpopular opinion, Monday, one not heard much on the network newscasts: Impeachment might not work out just the way Democrats and liberals in the media think. Turley actually highlighted problems for the Bidens, noting, “One of the only ways to really take down Donald Trump may be to beat him with a lifeless body of Joe Biden.”

Co-host Anthony Mason marveled, “You think there's actual concern about what Hunter Biden may have done?” Turley concluded that he didn’t think Biden explicitly moved to have the Ukranian prosecutor fired. But, he added, “ You're left with a very disturbing contrast by Hunter Biden's. It does look like an effort to influence his father. It's not going to look good in the bright lights of a Senate trial.”

He concluded, “It does look like an effort to influence his father. It's not going to look good in the bright lights of a Senate trial. The Senate could try to take down Trump, do measurable damage to Biden, and Trump could survive. That's the nightmare of Nancy Pelosi.” 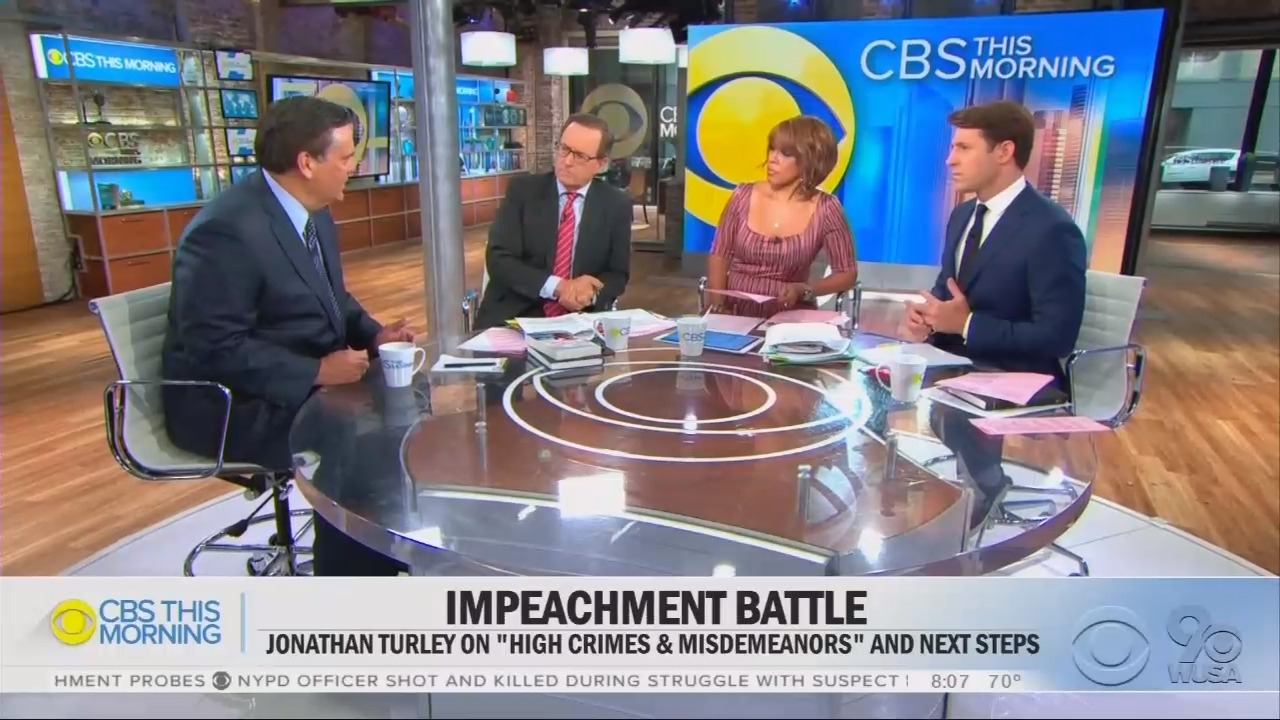 TONY DOKOUPIL: The inspector general who found the whistleblower complaint to be credible will reportedly speak with the House Intelligence Committee behind closed doors on Friday. That's the same day Secretary of State Mike Pompeo is supposed to turn over documents related to the President's communications with Ukraine.

ANTHONY MASON: CBS News legal analyst Jonathan Turley is with us. He testified before Congress in 1998 that President Bill Clinton could be impeached for lying under oath. Good morning, Jonathan.

MASON: Thanks for being here. You heard Congressman McCarthy say that the President did nothing impeachable and that the evidence is hearsay.

TURLEY: Well, first of all, you can bring in hearsay evidence in an impeachment process. You can bring it in the trial itself. Also, if this is proven, this is a clear impeachable offense. This would be self dealing, using public office to your own political or personal advantage. You have to prove it. You got to get a quid to go with the pro qo.

MASON: What are the Democrats missing at this point?

TURLEY: A quid. You know, the fact is the transfer not do it. People who say you don't have to show that he made this connection —

TURLEY: — military aid. You really do, if you're going to take down a president, you’re going to need to show that he made that linkage. “I've got $400 million on the table, and this is what I want.” He falls short of that. This is a President who has a curious ability to rest on the line of criminality. A place that most presidents avoid.

DOKOUPIL: Some would say he knows exactly what he's doing in that regard. One question, if you're looking for the evidence and you're the Democrats, what powers do the committees have to investigate? Who can they go? Who can they compel to testify?

TURLEY: There is really turbo charging congressional investigative powers. Once you’re in impeachment, the courts tend to defer to Congress. They did that in the Nixon case. In the Nixon case, the Supreme Court said, “There is executive privilege, but, by the way,  we're not going to let you use it.”  If there's an allegation of criminal acts or an impeachable offense, the
courts tend to defer to the process. In this case, it could be both. This could be a criminal act. It most certainly could be an impeachable offense. You just to prove it.

GAYLE KING: You do have to dot Is and cross the Ts on all this. Last night,  Nancy Pelosi told Scott Pelley on 60 Minutes the White House needs to speak the truth. Is there anything the White House can do to stop the inquiry do you think? They seem to be trying.

TURLEY: They seem to be trying and not very well. I think they are going to have to try and separate that quid from the pro quo. They’re going to have to bring out people that say, “There were other reasons we withheld that money.” They really are having trouble sticking that landing. They don't have a case to make so far that the President had objective reasons for doing this. The biggest concern that they have, the torpedo in the water, is if somebody comes forward and makes that connection and says, “The President made it clear this money's not getting to the Ukraine until I get this.” If they have a witness that says that, you're off to the races.

KING: Does it matter, though, that we keep hearing the whistleblower and don't know she or he, but we've been told they have a political bias. Does that matter here?

DOKOUPIL: If the House votes to impeach, but then goes to the Senate where there's a trial, does Mitch McConnell have an obligation to bring it to some sort of trial form or can he just table it without a vote?

TURLEY: I think he has an obligation too bring it. We've never had a case of a president impeached where the Senate did not hold a trial. But keep in mind, they set the rules. And the majority under rule 20 of the Senate rules can actually overall the presiding judge, in this case, chief Justice Roberts. So they can give Trump the trial he wants. And don't —  don't forget this could be the trial he wants.

TURLEY: Because he could —  one of the only ways to really take down Donald Trump may be to beat him with a lifeless body of Joe Biden. Because --

MASON: You think there's actual concern about what Hunter Biden may have done?

TURLEY: Yeah. Look, I don't think many people really buy that Hunter —  that Joe Biden had the prosecutor of Ukraine fired to protect his son. I don't think the evidence supports that. You're left with a very disturbing contrast by Hunter Biden's. It does look like an effort to influence his father. It's not going to look good in the bright lights of a Senate trial. The Senate could try to take down Trump, do measurable damage to Biden, and Trump could survive. That's the nightmare of Nancy Pelosi.

KING: Boy, there's so many layers to this case. Is either side ahead at this point? I know there's more to come. But from where you stand?

TURLEY: I think all the wins are at the backs of the House Democrats. They are building a case and this is a real impeachment case.

KING: All right, Jonathan Turley. Always good to have you.