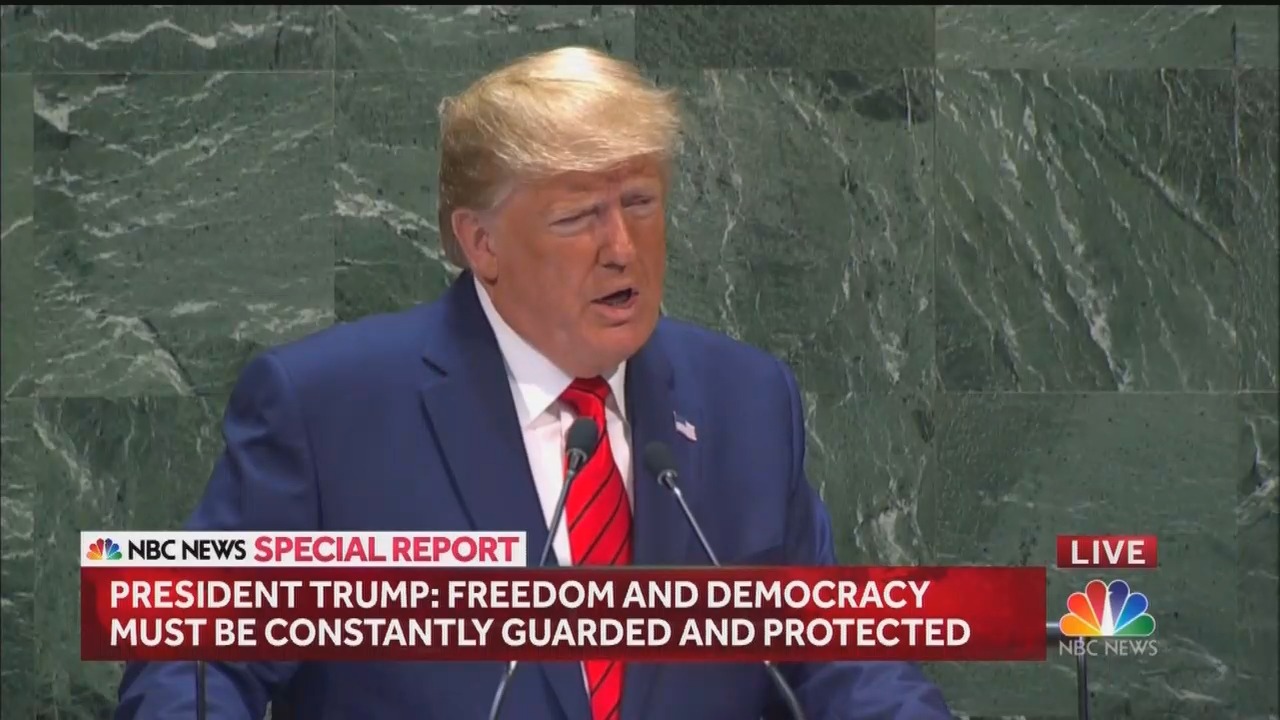 The journalists at NBC on Tuesday pounced on Donald Trump’s speech to the United Nations, immediately branding it a “19th century,” and “wrong in tone” address that caters only to the interests of America. Additionally, six of the ten minutes devoted to the live, post-speech reaction were actually focused on Ukraine and impeachment.

As soon as the address was over, Andrea Mitchell attacked: “This was his America first speech, bragging about the military power of the United States, about our economy....It's understandable in his context. He's running for re-election and running for re-election with a United Nations speech that was completely wrong in tone for this world body.”

Apparently, it wasn’t the speech she would give as the NBC journalist whined, “Not a mention of climate. Climate and poverty are the two big themes this United Nations week. No mention of either.”

Chuck Todd objected to the idea that, as he paraphrased, “you can have nationalistic-based foreign policy.” He called that “very controversial”:

To me, the one message he sent was sort of reinforcing the idea that, “Yeah, you can have nationalistic-based foreign policy.” And that's actually very controversial if you think about it. That would truly impact the refugee system around the world, would truly impact immigration around the world. I mean, if you actually dig deep into what he is saying in that, “Oh, embrace your patriots. Worry about your sovereignty.”.... That's a this is why we don't take in all comers. 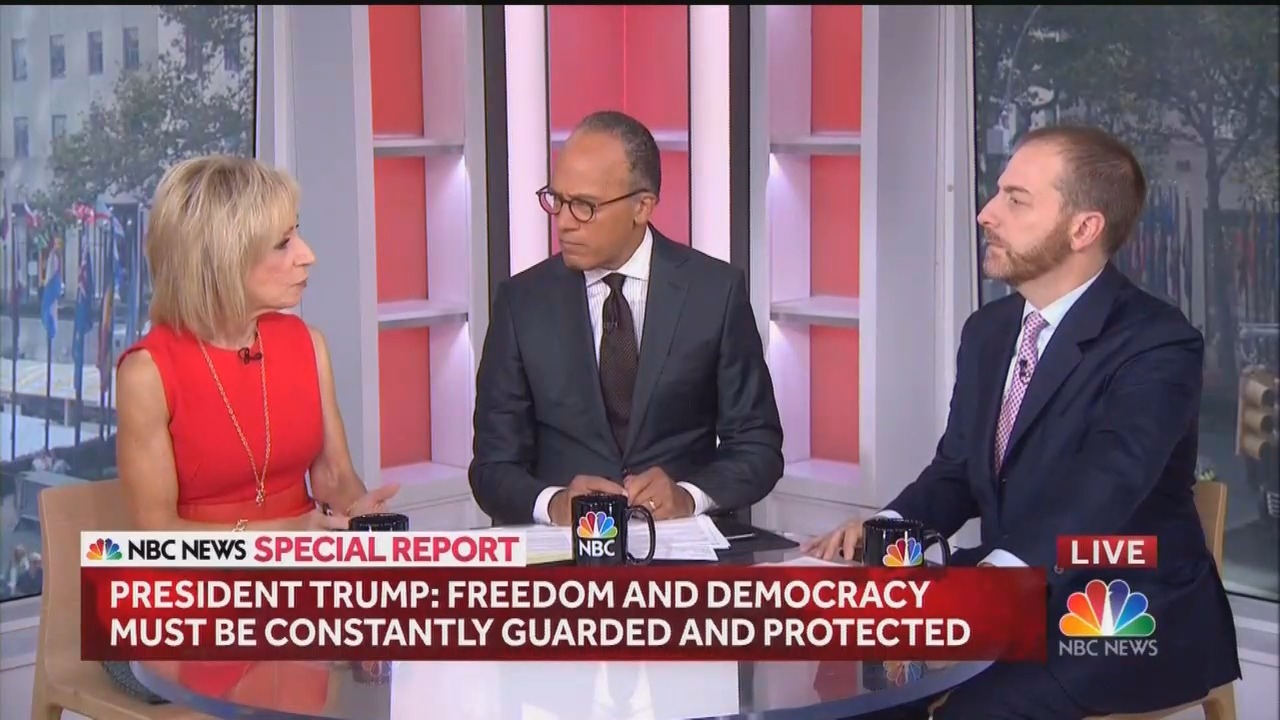 Well, if it was meant to insult the people in the room, it would have been hard to have done better. This was very much a domestic audience-oriented speech. I would describe it as a 19th century speech for a 21st century world.

For the next six minutes, the crew spent their time not on the speech, but impeachment. NBC Nightly News anchor Lester Holt warned, “Certainly the winds have shifted regarding impeachment.”

LESTER HOLT: President Trump concluding his address to the United Nations general assembly. A hearty applause there for a speech that was delivered in a tone and a pace we're not accustomed to seeing from the President, almost a rather somber pace. But making the point right out of the gate about American power, American military power and taking an early swipe, Andrea Mitchell, who joins us here, an early swipe at the idea of globalism as he spoke to a world body.

ANDREA MITCHELL: Indeed. This was his America first speech, bragging about the military power of the United States, about our economy, and saying that nations should deal with their patriots if they deal with their only national interests, not with global affairs. It's understandable in his context. He's running for re-election and running for re-election with a United Nations speech that was completely wrong in tone for this world body. But that said, on Iran, going after he said the fanatical leaders of Iran, their maniacal pursuit of nuclear weapons, despite U.N. nuclear weapons inspectors saying for months and months that they abided by the nuclear deal even after the U.S. withdrew. Very little on North Korea because they are in a state of flux. North Korea is violating U.N. resolutions which the President says don't matter because they're only short-range missile launches. So there's so much dissidence here, but I think China and Iran were the big targets.

HOLT: Most of his fire again toward —  and I use the term fire loosely because there wasn't a lot of fire in this speech. But you're right, China and Iran were the main targets. We're joined by Chuck Todd as well, moderator of Meet the Press. I'm wondering if that speech would have read differently in front of you versus what we heard.

CHUCK TODD: To me, it was a speech that was meant to be read and not delivered. I say this with no disrespect. He's not one that loves to deliver long speeches like this. The reason I say it that way, this was a defense of his ideology to the world. And that’s what I mean by -----  It's an attempt by the speech writers here to create a rationale for his domestic policies and for his foreign policy. That they say fits within —  that is part of a larger vision. Others will, I think, contest this over the years, whether there really was a vision to his foreign policy, but that's what this felt like. It felt like an attempt to say, “Okay, let's take everything he's doing and try to create a coherent explanation for it all.”

To me, the one message he sent was sort of reinforcing the idea that, “Yeah, you can have nationalistic-based foreign policy.” And that's actually very controversial if you think about it. That would truly impact the refugee system around the world, would truly impact immigration around the world. I mean, if you actually dig deep into what he is saying in that, “Oh, embrace your patriots, worry about your sovereignty.” That's a —  that's a this is why we don't take in all comers.

MITCHELL: And not a mention of climate. Climate and poverty are the two big themes this United Nations week. No mention of either.

HOLT: Let me bring in Richard Haas of the Council of Foreign Relations. He has been watching along with us. Richard, good to have you here. What are your thoughts about the direction, the tone of that speech given the audience that he was speaking to?

RICHARD HAAS (President, Council on Foreign Relations): Well, if it was meant to insult the people in the room, it would have been hard to have done better. This was very much a domestic-oriented speech. I would describe it as a 19th century speech for a 21st century world.

HAAS: Basically we live in this world of global challenges. Like it or not, what happens in the world is going to affect the welfare of every American and the well-being of the United States, but none of that came through. To the contrary, though, the President defines patriotism against globalism, whatever that means.

But again, unless we work with others to tackle global problems, from climate change to terrorism, to disease to building a global trading system, we Americans are going to pay a price. So, again, I think this is a speech at odds with much of the realities of the world. And also he didn't give himself any way to climb down on either Iran or North Korea. He still insists on denuclearization. That's not happening. North Korea is increasing its arsenal. And he didn't offer anything diplomatically to Iran. Essentially he argued for regime change, rather than saying we're interested in diplomacy.

HOLT: We should note the one thing we didn't hear about which we've been hearing about on the world stage here is Ukraine. The President comes into this speech clearly with this issue of his communications with the leader of the Ukraine and his questions that he's raised about Joe Biden. I want to go to Peter Alexander, who's at the U.N. right now. Because, Peter, the President made some remarks about that controversy minutes before delivering this speech.

PETER ALEXANDER: Yeah, Lester, you're exactly right. It's obvious that this issue of Ukraine has been on the President's mind, the issue of his own domestic politics certainly as they relate to his rivalry with Joe Biden right now. The President was pressed by reporters as he entered the United Nations earlier about some recent reports, first by The Washington Post that the President weeks before that phone call in question between President Trump and Ukraine's president took place in July, that the President called on his chief of staff to withhold nearly $400 million in military assistance to Ukraine.

The President effectively confirmed that he had delayed the sharing of that money with Ukraine, but his justification for it here was different. What he said that was notable is he said it was because other European countries have not been paying their fair share. As a fact check since 2014, the European Union has given more than $15 billion in aid to the Ukraine. The President said that was his focus, that it had nothing to do with this new questioning of whether he was using this as leverage to try to get Ukraine to investigate the former Vice President Joe Biden and his son, Hunter Biden, for corruption.

There has been no evidence provided of any wrongdoing by the Bidens there. But clearly this is something on the President's mind and it comes against the backdrop of Democrats in Washington, with House Democrats expected to meet later this afternoon refocusing their attention on the idea of impeachment with Democratic aides telling NBC News that Nancy Pelosi, the House Speaker, is now as it's described to us, reconsidering her resistance to impeachment. And a new wave of Democrats, who until this point had sort of withheld their support for beginning an impeachment inquiry now saying that they're onboard. Lester.

HOLT: Yeah. Peter, I want to pick up that with Geoff Bennett who was on Capitol Hill. Certainly the winds have shifted regarding impeachment, Geoff.

GEOFF BENNETT: They have, Lester. I think the ground has really shifted on this entire impeachment question in just the last 24 hours. To Peter's point, the reason why that has happened is because House Speaker Nancy Pelosi I'm told has now been reconsidering her approach to all of this. For months she's really resisted the impeachment issue, saying that it would be too divisive to the country. One of the reasons why she's taken that approach is because of all of those front-line Democrats, those Democrats who won districts in 2018 that President Trump won back in 2016. And the sense, the thinking was that pursuing impeachment wouldn't be good for their political bottom line. But now we've seen a number of those members themselves throw off their reluctance entirely, seven of them overnight writing an op-ed in The Washington Post making the point that Donald Trump did try to press a political leader in service of his political campaign, that would be a bridge too far and it would deserve an immediate response or at least a full investigation.

An impeachment investigation is the thing that Democrats —  that would allow Democrats to get a lot of the underlying evidence and documentation they have been looking for for months, not just with this but also with the Mueller investigation. So, yes, house Democrats are expected to have a meeting here on Capitol Hill at 4:00 P.M. Eastern. We expect to get a sense coming out of that one way or the other about which avenue these Democrats will pursue.

HOLT: All right. Geoff, thank you. Let me turn to Chuck on this. Talk about the risk to Democrats here. They only know what they know and it's not a lot right now. Do they risk going down the Mueller route where they think they have something and it's not quite what they thought?

TODD: That's always possible. I think what's really, though, hanging over the heads of these Democrats is also a Mueller flashback but the other way, which is they chose not to essentially take what Mueller delivered them and not draw a line in the sand. And now there's an argument, when he makes —  the fact that the phone call to the Ukrainian President happened the day after Mueller testified before Congress, it's almost like —  it's almost like a taunt in the congressional Democrats. So I think there is now a fear among some Democrats that not acting perhaps is either going to look like they're encouraging it in some form or another, that they're not trying to stop it, or it really could turn into a political backlash for them.