MSNBC on Tuesday night donated 12 minutes of air time to far-left filmmaker Michael Moore as the director demanded that Democrats nominate a very liberal nominee or risk losing. Of that time, six and a half minutes came totally uninterrupted as host Brian Williams just let Moore go on and on.

As for a strategy, he declared, “Let's get out the Democratic base of young people, women, and people of color.” Moore warned Democrats: “The worst thing to do is to moderate, to go to the center, and to think that's how we're going to win. This is how we're going to lose.”

Speaking of the loss in 2016, Moore predicted, “And it will happen again if we don't run the right candidate. A beloved American who's not an inside-the-beltway politician type person, but somebody who's going to be a street fighter and fight for that 70 percent majority that's going to take us back into the White House.”

Who is that beloved candidate? Moore later came back on MSNBC and declared it to be...Michelle Obama? 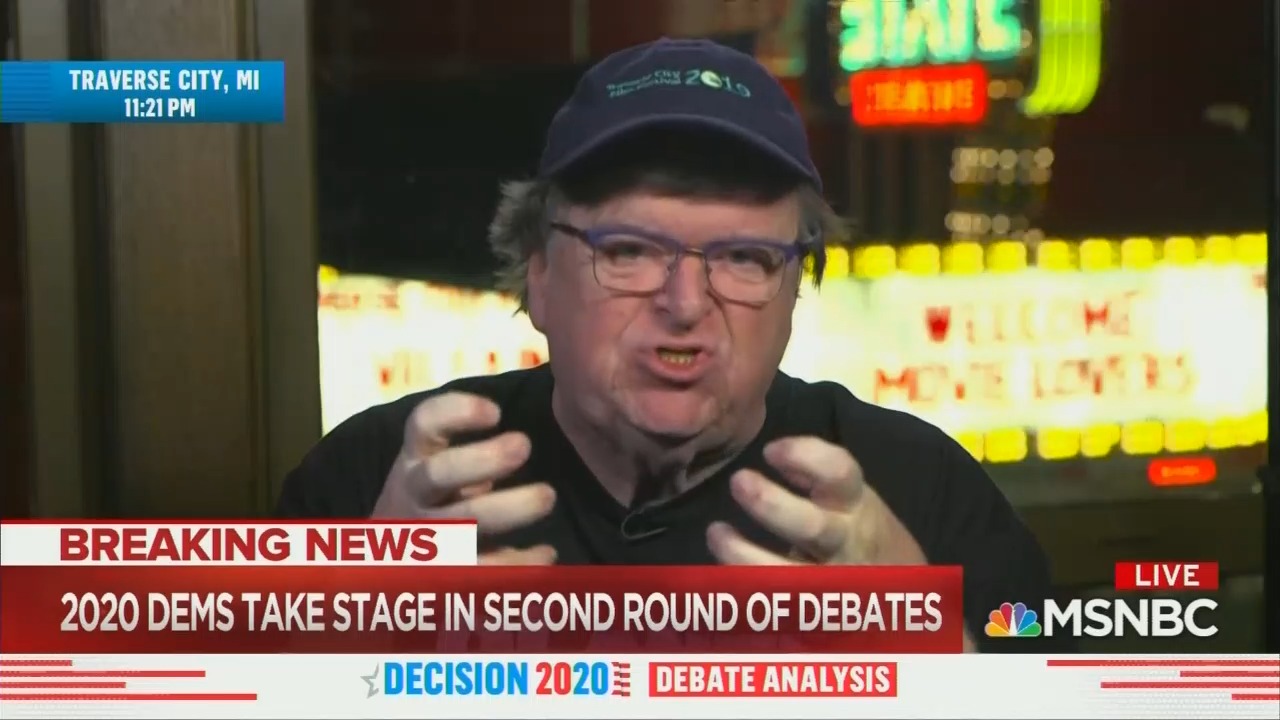 Who can crush Trump? Who is the street fighter? We saw it in Bernie last night. Who is the street fighter that can crush Trump? And frankly, I think there's a person that could do this, if the election were held today, there is one person that would crush Trump . And she hasn't announced yet. And her last name rhymes with Obama. In fact, it is Obama. Michelle Obama. Everybody watching this right now knows she is a beloved American and she would go in there and she would beat him. She would beat him in the debates, he wouldn't be able to bully her, he wouldn't be able to nickname her and she is beloved.

BRIAN WILLIAMS: This man is beyond a Never Trumper. He is among the best-known Michiganders alive today. He's with us from Travers City, Michigan. The documentary filmmaker Michael Moore. Michael, knowing you were coming on tonight, I have been so curious as to what you made of these last two nights. I don't know if you heard at the top of the broadcast I said “A national Democrat said to me tonight having watched this attack on the front-runner I hope they know what they're doing.”

MICHAEL MOORE: Yeah. I've watched and I've listened and I've listened to all the punditry over the last 24 hours. Let me say, as someone here who's sitting in the midwest and I don't think people understand. I think a lot of Democrats don't understand. A lost people who are in the leadership don't understand, this isn't 1980. This discussion of Reagan Democrats, of this sort of —  the working class, they talk about the working class like it's Lunch Bucket Joe. The majority of the working class in this country are women. When you say working class, you're talking about young people 18 to 35. They make the least amount of money. When you're talking about working class, you're talking about people of color. They make the least amount of money. That's who the working class is. But somehow when we have these discussions on these shows, we talk about, well, “We've got to not get too far to the left here or be too progressive because we'll lose that white working-class vote. Well, I don't know. Maybe that was true 30 or 40 years ago. It's not true in the America we live in. Nearly 70 percent of the electorate next year, eligible voters, next year in this country, 70 percent are either going to be women, people of color or young people between the ages of 18 and 35 or a combination of the three. That is America in 2019, 2020. Not this kind of conversation we're having about how, “We better stay moderate here because we don't want to lose— ”who? Who don't you want to lose? Two thirds of the  white men who voted for Trump? You know, news alert. They're not coming. Some of them will come. Trump got eight million people who voted for Barack Obama either once or twice, voted for Trump. So there's a chance, maybe a million of them might come back. But guess what? Trump only won by 77,000 votes, combined votes between Wisconsin, Michigan, and Pennsylvania. We don’t need a million, folks. We just need 77,000. I think we can find them with that 70 percent majority. And by the way, all the public opinion polls show, and I've watched Steve Kornacki, I study Steve Kornacki, and --

MOORE: The proof is there that the majority of Americans support a raise in the minimum wage. The majority of Americans believe in the Equal Rights Amendment for women. The majority of Americans are against mass incarceration. The majority done want to put people in prison for marijuana. Down the whole list of issues the majority of Americans take the liberal progressive position. And they will come out if they're inspired to vote for the candidate that's going to side with them. And this discussion that we're having seems to be less about that and more about this mythical voter th at we don't want to lose in the Democratic Party. They've been lost. Yes, we can get some of them back. But we don't really need them. Ann Richards, I got to meet her before she passed away, the former governor of Texas. She said to me, she said a fact that is rarely repeated is that no Democrat other than twice since World War II, since Harry Truman, only twice has the Democrat who ran for president and won got the white male vote. Twice. Once with Lyndon Johnson in the landslide of '64 a year after Kennedy was killed. And the second time was Clinton's second election. So, that means John F. Kennedy lost the white male vote. Jimmy Carter lost the white male vote. Clinton lost the white male vote in the first election. Of course, Barack lost it both times. So let's stop talking about how we can get these —  this middle class, this midwestern middle America, you know, quit talking about it like it's like this. “Oh, got to get those middle Americans out there in the field of dreams, out in the corn field.” You know, it's not that anymore. The working class is women. The working class are people of color. The working class are young people. And this whole discussion about —  they're not attacking Barack Obama. I think Lawrence said it that the good thing about liberals and Democrats is this sort of self-analysis and willing to be critical of each other to improve ourselves. And but if you're going back even to Obama in 2008, since 2008, that's now 10, almost 10, 11 years ago, when he won, since that moment nearly 40 million people went from being 17 years old to 18 years old. Four million every year become adults, become voters. You've got 40 million people in this 10 to 11-year period who weren't voters at that time but became voters during those years from then until now. They don't know what you're talking about when you talk about this Michigan, Macomb County, Reagan Democrat, all this stuff. I remember my parents' friends talking about waxing poetic about Calvin Coolidge. People are like, “What? You know, it's -- be quiet, the Beatles are on Ed Sullivan.” Let's get out the Democratic base of young people, women, and people of color. And for the one third of the white guys who voted for Hillary last time, good on you. Come on back. And bring a couple of your buddies, who mistakenly voted for Trump. But that's all we've got to do, folks. The worst thing to do is to moderate, to go to the center, and to think that's how we're going to win. This is how we're going to lose. If we don't run a street fighter, if we don't run somebody who's going to inspire people to come out and vote, we're going to lose again. And I think —  nobody listened to me last time when I said this, that Trump was going to win, he was going to win Michigan, Wisconsin, and Pennsylvania. And I don't want to say it out loud because I don't want it to happen but I think a lot of people watching this right now know it already did happen once so, you know it can happen again. And it will happen again if we don't run the right candidate. A beloved American who's not an inside the beltway politician type person, but somebody who's going to be a street fighter and fight for that 70 percent majority that's going to take us back into the White House.

WILLIAMS: Okay. And that's where we have you because to our audience Michael Moore is going to stay with us.