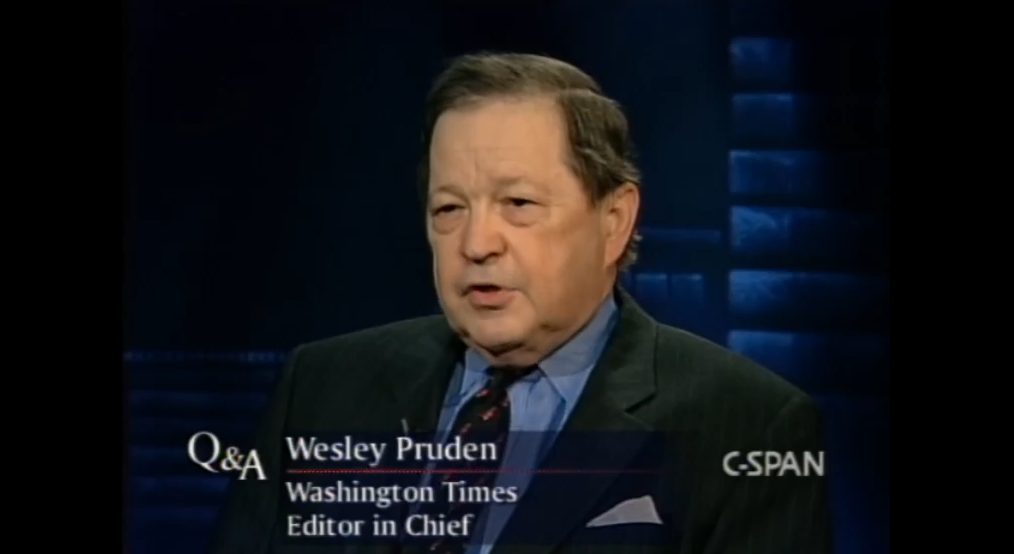 The Washington Post on Friday couldn’t let old rivalries go, even in death. The paper’s obituary for long time Washington Times editor Wesley Pruden dripped with contempt for the “defiantly abrasive” conservative and his paper. In fact, the paper offered nicer coverage to Fidel Castro, hailing the dead dictator as a “romantic figure in olive-drab fatigues and combat boots.”

Of course, the obituary had to warn readers of how dangerously conservative the Times is:

Top editors, including Mr. Pruden, insisted that the paper’s ideological tilt was limited to the editorial and opinion pages. But the Times was widely viewed as a conservative newspaper, with the Columbia Journalism Review once writing that the publication was “like no major city daily in America in the way that it wears its political heart on its sleeve.”

Cited for comment on Pruden were notable liberal outlets and journalists. Smith wrote:

... The Nation published a report cataloguing similar claims, and reported that Mr. Pruden and managing editor Francis B. Coombs Jr. had fostered an atmosphere that was “profoundly demeaning and abusive to women and minorities,” citing more than a dozen “well-placed sources.” (Mr. Pruden was not quoted in the Nation article.)

He described Pruden as a  “punchy, defiantly abrasive columnist.” The Post journalist included another liberal, David Brock, in the criticism:

“There were endless controversies and resignations over what became known as ‘Prudenizing’ news copy — slanting it in a conservative direction,” wrote David Brock, a former Times reporter, in his book “Blinded by the Right.”

Even minor incidents early in Pruden’s life were spun as negative and dark:

Mr. Pruden covered national politics and the Vietnam War before serving as a foreign correspondent at the Observer. He departed around 1976 — by some accounts, he was forced out amid allegations that he manufactured quotes for his stories — and spent the next several years trying to write and publish a long satirical novel about Vietnam.

Oh, by some accounts? Smith didn't offer any greater detail.

“Revolutionary remade Cuba,” oozed the Post headline. Their obit gushed he was “a romantic figure in olive-drab fatigues and combat boots” and a “spiritual beacon for the world’s political far left.”

Smith cited the Washington Times’s founder as viewing the paper as “a counter [to] what [Sun Myung] Moon viewed as The Washington Post’s liberal bias.” Clearly, that bias still exists.