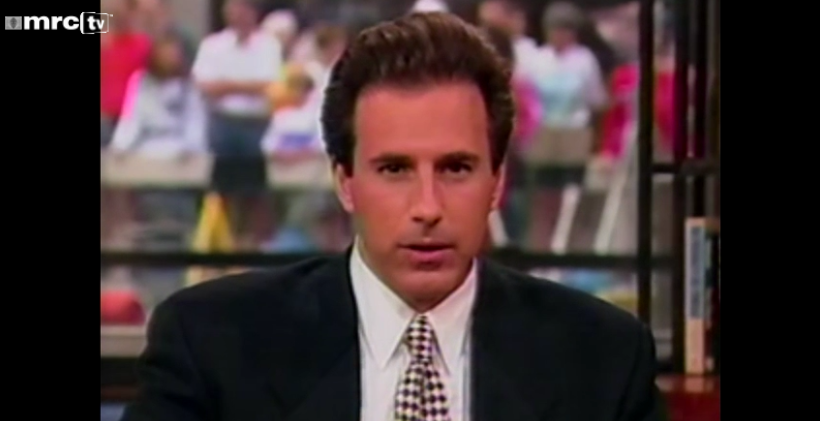 Americans are celebrating the nation’s birthday today at Fourth of July events all over the country. But media outlets throughout the years have used Independence Day to bash the country. From the now disgraced Matt Lauer on the Today show, to CNN, to Time magazine, the Fourth has been a time not of patriotic celebration, but of shame.

Then-Today co-host Lauer on July 4, 1994 brought on Democratic Congressman John Lewis and far-left professor Lani Guinier (who was so controversial she was defeated as Bill Clinton’s potential  Assistant Attorney General for Civil Rights in 993). Lauer wondered, “We hear the stories of discrimination in education and housing and jobs all the time. We hear the violence between races. Do you think it's possible that America is simply an inherently racist place?”

But Lauer made sure to remember, “Happy Fourth of July.”

On July 2, 2010, USA Today gave Julianne Malveaux space to denounce America. “I have never been big on the Fourth of July,” she observed. Referencing Frederick Douglass’s famous “The Meaning of the Fourth of July for Negros,” She compared slavery to 2010 circumstances:

Our nation has come a long way since 1852, but for many African Americans, shouts of liberty are still hollow mockery. Unemployment is a scourge on all Americans, but the black unemployment rate, at 15.3% in May, is nearly twice the white rate. Every economic indicator — income, wealth, homeownership — screams inequality.

In 2012, MRC Research Director Rich Noyes collected some of the worst examples of America bashing on the Fourth. Here are a few of his selections:

“Oh say, we've seen too much. The Star-Spangled Banner pushes like a cough through America's mouth and the twilight's last gleaming is just that, a sickly flash above our heads as we ride unsuspecting in the bellies of sleek trains, plop to our knees in churches, embracing truths that disgust us.”
— Boston Globe arts critic and "poet" Patricia Smith in The Nation's “Patriotism” issue, July 15/22, 1991.

“So as you've celebrated yet another Independence Day, as you've toasted the great victory in Iraq one more time, as you've marveled at the success of the $4.4 million tanks (88 times costlier than their World War II counterparts) and the $28 million bombers and the $106 million Stealth fighters, you might also think for a moment about how some - just some - of the $880 billion the world put out for the military last year might have otherwise been spent. On things like health. And the environment. And education.”
— NBC News President Michael Gartner in a USA Today column, July 9, 1991.

“We know what July 4th is. What about July 5th? After the fireworks, the music, the rhetoric of freedom what then?...What kind of nation does our flag fly over now? Not a less innocent one, because American innocence was never the truth. Not one less reluctant to go to war without a good reason, because we have foolishly credited bad reasons in the past. But now the nation lacks even that. As our President demonstrated last week, we have become a people who wage unending war killing and maiming our young ones and theirs without being remotely able to say why.”
— Columnist James Carroll in the July 5, 2005 Boston Globe.

“The framers were not gods and were not infallible. Yes, they gave us, and the world, a blueprint for the protection of democratic freedoms — freedom of speech, assembly, religion — but they also gave us the idea that a black person was three-fifths of a human being, that women were not allowed to vote and that South Dakota should have the same number of Senators as California, which is kind of crazy....If the Constitution was intended to limit the federal government, it sure doesn't say so.”
— Time managing editor Richard Stengel in the magazine's July 4, 2011 edition, which featured a picture of the U.S. Constitution going through a shredder with the headline, “Does It Still Matter?”