MSNBC on Friday celebrated the “major reversal” of 2020 Democratic frontrunner Joe Biden when it comes to abortion and his support for the Hyde Amendment. MSNBC Live host Stephanie Ruhle hyped reporter Heidi Przybyla as being mostly responsible for the flip flop. Przybyla even used debunked information to warn of the dangers of abortion restrictions passing in several states.

She linked, “We are actually seeing access being dramatically decreased in some of these states. Look at Texas for example, where you have had a lot of Planned Parenthood clinics close. And you are also seeing an increase in maternal mortality rates.” Ruhle dramatically shook her head and replied, “An increase in maternal mortality rates. Shouldn’t that be an alarm for everyone?”

The only problem? This is isn’t accurate.

On May 21, 2019, the Washington Post’s fact checker debunked the claim with a headline: “No, maternal mortality did not spike in Texas after funding cuts to abortion clinics.”

The original study, by a team of researchers headed by Marian F. MacDorman and published in Obstetrics & Gynecology in 2016, made headlines. The maternal mortality rate in Texas had climbed sharply – in fact, doubled – between 2010 and 2012, even though it had only modestly increased from 2000 and 2010. The study found that 148 Texas mothers died of pregnancy-related complications in 2012, compared with 72 in 2010.

But when the task force headed by Hollier examined and cross-referenced the actual records of 147 women listed as having died of pregnancy-related complications, they found many had been erroneously counted. Only 56 of the deaths fell under the definition of maternal mortality — any pregnancy-related death while a woman is pregnant or within 42 days of giving birth, excluding accidental or incidental causes such as car crashes or homicides. 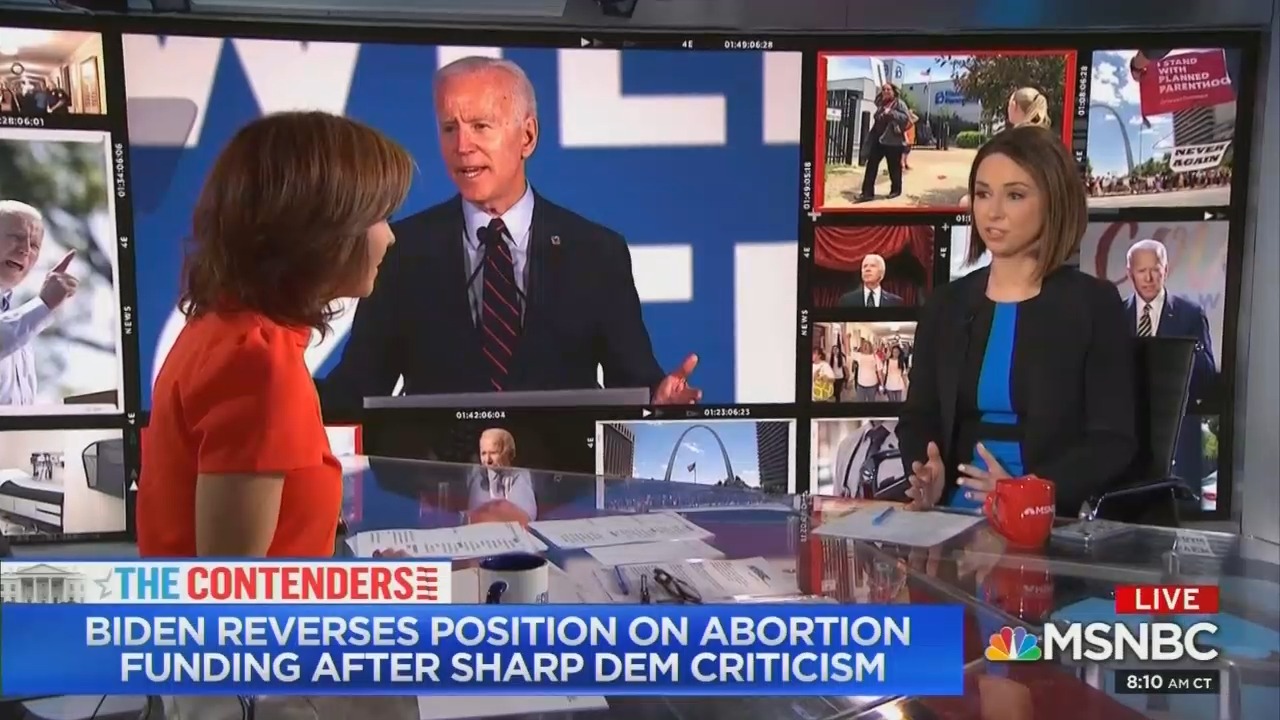 Przybyla bragged about how her reporting on Biden’s previous support for the Hyde Amendment, which banned most federal funding for abortion, caused the Democrat to move left: “It was our reporting that brought that to light...”

She added, “However, after we reported that, within hours we saw really a pile-on by all of the other 2020 candidates and by some of the most important Democratic constituency groups that represent women.” Ruhle cheered, “Heidi Przybyla’s reporting actually sparked this entire debate.”

Get it? Przybyla is responsible. Getting politicians to move farther to the left is apparently the new definition of journalism these days.

Earlier in the week, Przybyla referred to Democrat and ex-KKK member Robert Byrd as a “conservative.”

A partial transcript of the segment is below. Click “expand” to read more:

STEPHANIE RUHLE: Now to a major reversal for 2020 Democratic front-runner Joe Biden on the Hyde Amendment. You remember that. It bans federal funding for most abortions. Heidi Przybyla’s reporting actually sparked this entire debate. Heidi joins me now. Extraordinary. Walk us through what happened, your reporting and what he is saying now.

HEIDI PRZYBYLA: A stunning reversal, Steph. This is a position that Biden held for 40 years. He has supported this amendment since the inception. Now 40 years later —

RUHLE: What is the amendment?

PRZYBYLA: It essentially bans federal funding for abortion with some rare exceptions including the life of the mother and in cases of rape an incest. But 40 years later, Steph, the dramatic change is that the Democratic Party has shifted underneath his feet and now he is left alone, or at least he was as of 24 hours ago, as the only candidate in the 2020 field who still supports this amendment. It was our reporting that brought that to light that his report, that his support remains firm for this. However, after we reported that, within hours we saw really a pile-on by all of the other 2020 candidates and by some of the most important Democratic constituency groups that represent women.

Planned Parenthood. Emily's List. It was within really just hours we were told by our own reporters, Mike Memoli and Marinna Sotomayor who are on the ground that Biden's own advisers didn't even know where he was going to come down on this until he took the stage. And  so from what we can tell, this was a very personal decision on Biden's behalf, maybe looking at all of the backlash, looking at the current context in which this is taking place and deciding that he was going to change his mind.

The current context, of course, is that abortion rights are under siege unlike anything we have seen since the inception of Roe. It is taking place from a number of fronts. We are seeing the states, the red states, pass the abortion laws to effectively end abortion as we know it. Then we are seeing the Trump administration pulling back on funding, trying to pull back on funding for Planned Parenthood. And we are actually seeing access being dramatically decreased in some of these states. Look at Texas for example, where you have had a lot of Planned Parenthood clinics close. And you are also seeing an increase in maternal mortality rates.

RUHLE: An increase in maternal mortality rates. [Shakes head.] Shouldn’t that be an alarm for everyone? Heidi, amazing reporting!