CNN: Will Trump's July Fourth Rally ‘Foam at the Mouth’ With Calls ‘for Violence?’

CNN’s Alisyn Camerota on Monday fretted that Donald Trump’s proposed involvement with the nation’s Fourth of July celebrations could result in a “foaming at the mouth” call “for violence.”

The New Day talked to Josh Dawsey of the Washington Post and worried, “What kind of speech would he give? Would he give a presidential speech or would he give one of these sort of 'foaming at the mouth' speech that we sometimes see at the rallies where they clamor... where people in the crowd clamor for violence?”

The concern of keeping a deeply American day from being politicized is a legitimate one. But it’s not something that reporters worried about under Barack Obama. The Super Bowl is an unofficial celebration in America, yet journalists did not object when the Democratic President took over Super Sunday, insisting on an interview prior to eight separate Super Bowls. (George W. Bush did one pre-Super Bowl interview prior to the 2004 game.)

Instead, journalists tossed softballs to Obama. In 2016, CBS sent Gayle King, an Obama donor and friend, to talk to him. 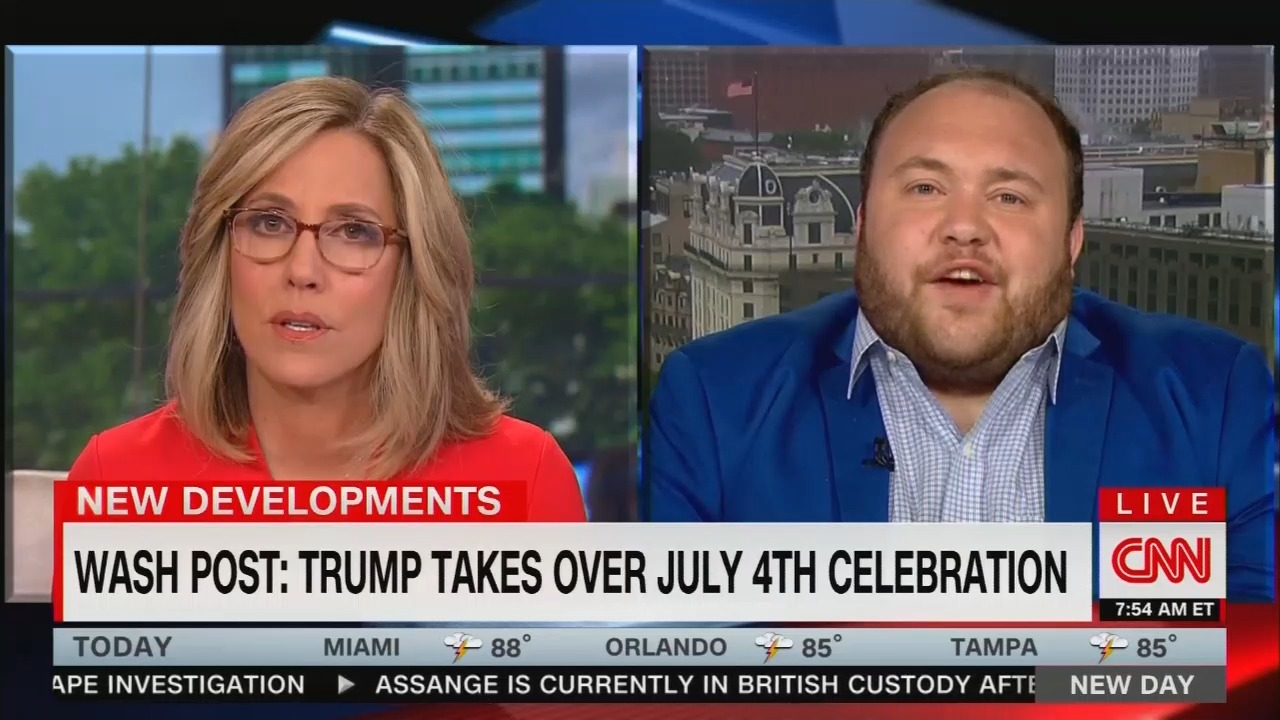 ALISYN CAMEROTA: Meanwhile, is the Fourth of July celebration in Washington about to become Trumpified? "The Washington Post" reports that President Trump is taking charge of Independence Day. He hopes to address the nation from the steps of the Lincoln Memorial.
And joining us now is one of the journalists who broke that story, Josh Dawsey. He's a White House reporter at "The Washington Post" and a CNN political analyst. OK, Josh, great to have you here. This article got our attention. You say that President Trump wants to Trumpify the Fourth of July. What will that look like?

JOSH DAWSEY (White House reporter, Washington Post): Well, the President's been delving into the minutia with his team for the last few months. He wants to have a speech on the steps of the Lincoln Memorial. He has moved the fireworks show from a usual location to a different place. They're trying to get different entertainment for the venue. And it's going to be, in his mind, a July Fourth celebration that he's always wanted to throw. As you also saw, he's having fireworks being shot over Mount Rushmore now. That's never been done before.

So the president is taking a keen interest in July Fourth and putting together this ceremony more in his likeness than in previous years.

CAMEROTA: You say the development has surprised and worried some city and federal officials. Why?

And a presidential motorcade takes some pretty onerous steps to get the president there safely and there's some concern about logistical challenges of moving the president on the same time as hundreds of thousands of people are out and about.

CAMEROTA: The president very much wants to give this speech, it sounds like, from the Lincoln Memorial. And you write, "The President's starring role has the potential to turn what has long been a no-npartisan celebration of the nation's founding into another version of a Trump campaign rally." And I'm just wondering, Josh -- I mean, what kind of speech would he give? Would he give a presidential speech or would he give one of these sort of 'foaming at the mouth' speech that we sometimes see at the rallies where they clamor -- you know, we hear -- we heard it just last week where people in the crowd clamor for violence.

DAWSEY: Well, I think his advisers, themselves, don't know what he's going to say before he gets up there. The speech would supposedly be about America, and patriotism, and the economy, and his administration's accomplishments. And, you know, kind of a rah-rah speech.

But the President often goes off teleprompter, as we've seen time and time again. So what he would actually say from the steps of the Lincoln Memorial with these symbol throngs out there is really hard to know.

CAMEROTA: How much will these changes cost?

DAWSEY: Well, the celebration costs hundreds of thousands of dollars, at the least. And what the president has done is obviously adding some different entertainment. You know, adding the logistics of putting together his visit, security.

So it's hard to know exactly what the price tag will be. But everyone that we talked to in reporting this out said it would be more expensive for the things that he wants done.

CAMEROTA: You write that the genesis of this idea was his visit to France. And you say, "The president's idea for the Trump-influenced Fourth of July began within hours of attending a lavish Bastille Day parade in Paris in 2017, former aides say." And we have some video where we all remember how impressed he was with this sort of show of grandeur, basically.

CAMEROTA: And so what was it about this that so got his attention?
DAWSEY: The president was totally dazzled by it, as you said. He loved the tanks, he loved the aircraft flying over. When he got back on Air Force One, a couple of his former aides said to me before the plane even took off he had started mapping out what he wanted a celebration to look like in the United States and it was similar to that.

And if you remember, there was a -- there was a military parade that he was thinking of having that was eventually scuttled after the city of D.C. said it would be nearly impossible. That the price tag would be upwards of almost $100 million, and the president had to scuttle that.

But this has been a long-founded dream of his to put together kind of a celebration of patriotism that he runs.

I mean, when he was in Paris for that celebration, one of the things he said on the way back is, "Why don't we do this in America? Why don't we have something like this?" And now, he's getting his version of it.

CAMEROTA: And it's so interesting Josh to hear how engaged and interested he can be when it's a topic --

CAMEROTA: -- that he likes or that he's interested in.

CAMEROTA: So you said that he's sort of aggressively involved --

CAMEROTA: -- in the planning of this as opposed to obviously, some of the policies --

CAMEROTA: —  that we've seen in the past where -- for instance, family separation where they could connect children who had been taken --

CAMEROTA: —  from their parents. They lost the connection and kids couldn't be sent back to the right addresses. But this type of thing, you say the minutia is actually very interesting to him.

DAWSEY: Well, the President's kind of a showman and he's a —  he's a builder, as you know. So he often gets involved in things that are going to be public projections or in the design of projects. I mean, in reporting this out we learned that in the course of renovations of the FBI building, he even wanted carpet samples and specs brought to him. In this fireworks display, he's been asking in unrelated meetings about different parts of the celebration that he really has gotten involved in the details here. And what he decides to get involved in and what he doesn't is, obviously, particularly interesting. But this is something that he sees as a show of grandeur, a show of force, a show of patriotism, and he wants himself at the center of it all.