60 Minutes journalist Lesley Stahl on Sunday spent 13 minutes fawning over House Speaker Nancy Pelosi as a “powerful” “giant slayer” and the “patron saint of shade” when it comes to Donald Trump. The segment featured little in the way of criticism or push back, other than to wonder why the Democratic politician hasn’t accomplished more of her liberal goals.

When Pelosi compared herself to the Founding Fathers and Abraham Lincoln, Stahl didn’t offer skepticism. The Speaker bragged, “As our Founders said, when they declared independence and established a new nation, 'The times have found us.' The times found Lincoln. Not to be presumptuous to put ourselves in those categories, but the times have found us.”

Instead, the journalist gushed over Pelosi’s ability to slam the President. Stahl reminded, “At the State of the Union, she did her mocking clap and it went viral.” Speaking of the rabidly pro-abortion politician, the journalist highlighted a comparison sure to offend Catholics, “Now, if you go to her own campaign website, you'll see she's touting herself as 'The Patron Saint of Shade.'” 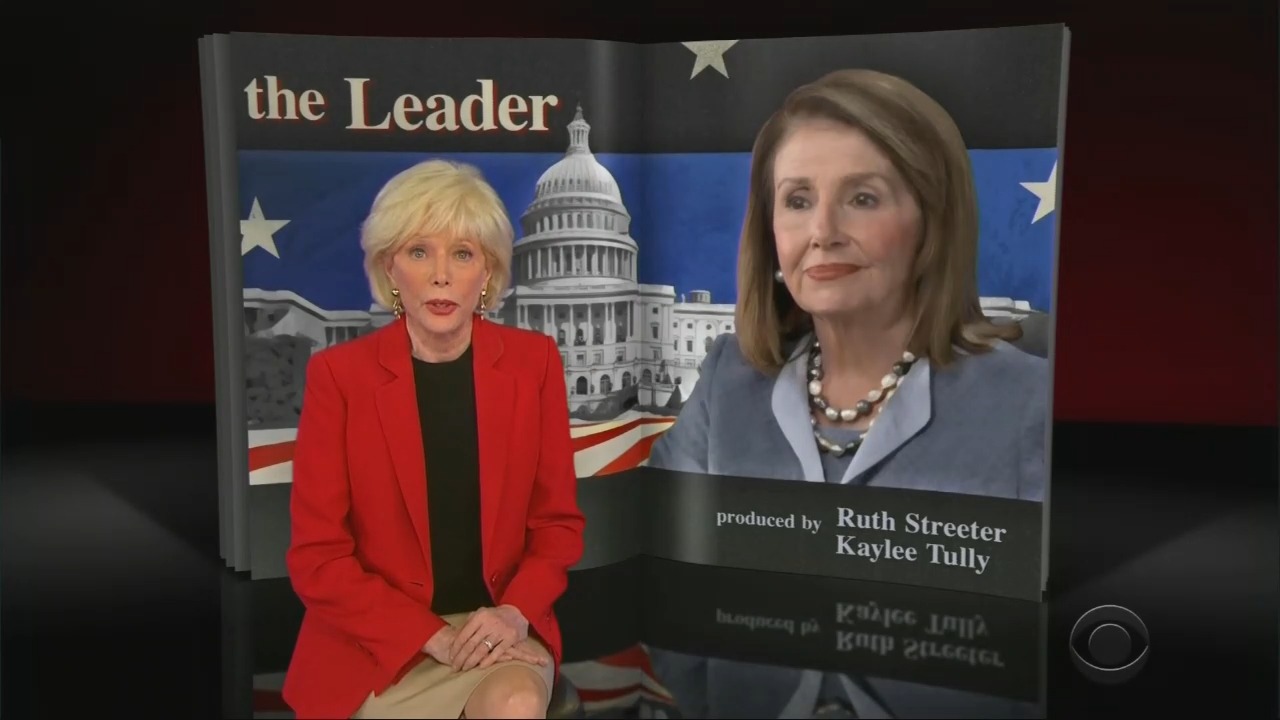 Recounting the Democrat’s public fight with Trump in 2018, the correspondent focused on fashion: “Right after the meeting, she walked to the mics in her orange coat, with a whole new image, her ascendance to the speakership no longer in jeopardy.”

Repeatedly, Stahl touted what Pelosi thinks about herself: “She told us that our Democratic values are being threatened, and says unabashedly, that she is the right person to stand up for them.”

Oh, well okay then. This also qualified as a question: “You have complained, I'm quoting you, President Trump is engaged in an ‘unconstitutional assault on the Constitution.’"

Stahl’s idea of getting different perspectives on Pelosi included going to fellow Democrats and asking softball questions like this one: “How many of you are going to be willing to tell me how afraid you are of her?”

Sunday's interview was quite the contrast to the treatment Trump got when Stahl interviewed him for 60 Minutes on October 14, 2018. She peppered him with repeated questions on climate change, trying to get the President to change his stance:

Do you still think that climate change is a hoax?... You know, I was thinking what if he said, no, I`ve seen the hurricane situations, I've changed my mind. There really is climate change. And I thought, wow, what an impact.... What an impact that would make. 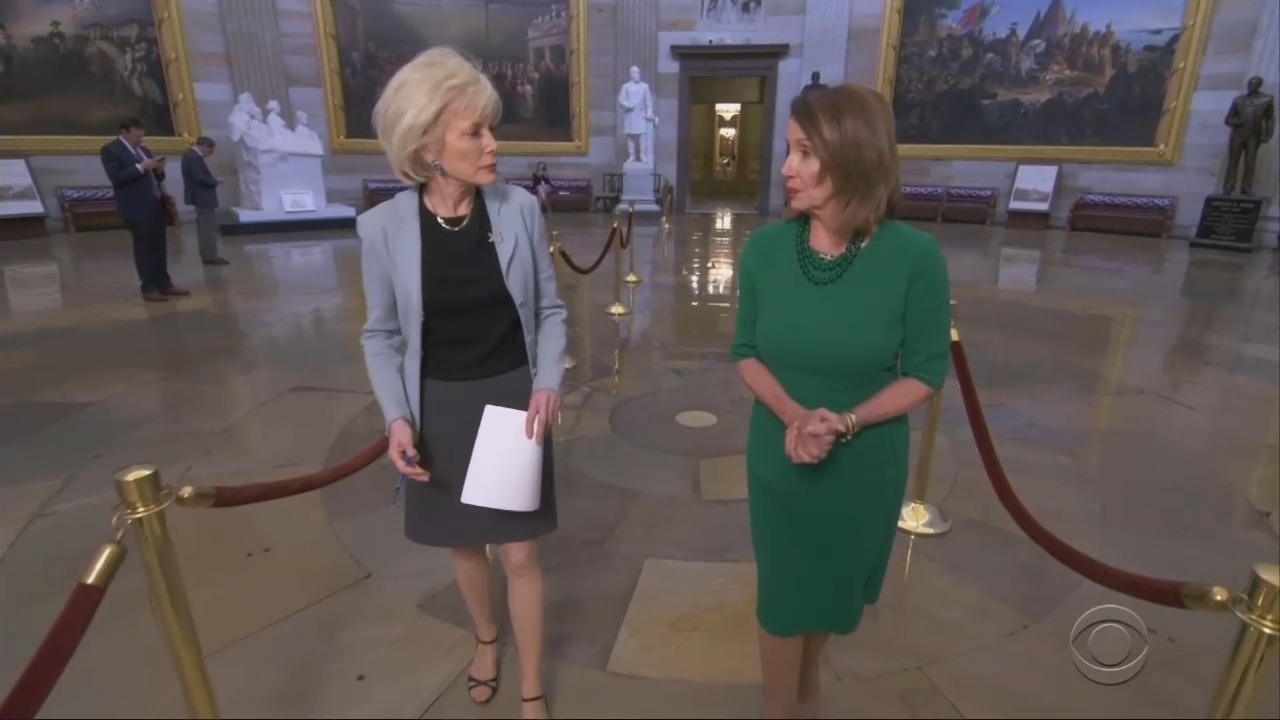 Throughout that segment, Stahl repeatedly interrupted Trump and tried to pin him down on policy. And that would be fine — if 60 Minutes did the same thing for someone like Pelosi. Instead, Stahl on Sunday needled the Democrat on accomplishing liberal goals: “But why doesn't anything get done? The Dreamers?”

One question, citing Alexandria Ocasio-Cortez, even seemed to put Pelosi as in the middle somehow:

So you are contending with a group in Congress: Over here on the left flank are these self-described socialists, on the right, these moderates. And you yourself said that you're the only one who can unify everybody. And the question is can you?

Pelosi may not be an avowed socialist like Ocasio-Cortez. But she’s no moderate. Her lifetime American Conservative Union Score is 2.61.

However, when it comes to Democrats, CBS journalists act more like Entertainment Tonight than 60 Minutes.

LESLEY STAHL: Nancy Pelosi is the most powerful woman in American political history. She's been speaker of the House not once, but twice. And President George W. Bush's nickname for her was "3" because of her place in line for the presidency.

Under her leadership last year, the Democrats won back control of the House. The San Francisco liberal is now the voice of her party and chief critic of President Trump. she's also keeping close tabs on at least six House committees investigating the president. And she's pressing for release of the full, unredacted Mueller report.

HOUSE SPEAKER NANCY PELOSI: The Mueller report is about an attack on our elections by a foreign government. And we want to know about that. We wanna know about that in terms of being able to prevent it from happening again. So it's bigger even than Donald Trump.

STAHL: She says she doesn't trust Attorney General William Barr. Do you think that the attorney general is covering anything up?

PELOSI: I have no idea. I have no idea. He may be whitewashing, but I don't know if he's covering anything up. There's no use having that discussion. All we need to do is see the Mueller report.

STAHL: And asking for the president's tax returns?

PELOSI: It should not have taken this long for the president-- he said he was under audit. When I was in a-- I was going to a Martin Luther King breakfast in San Francisco and one of the waiters there said to me, "Madame Speaker, when the President says the Mueller report's going on too long just tell him not as long as your audit." Everybody has released their returns and we will have legislation to say that everyone should-- must, but for the moment he's been hi—  so what's he hiding?

STAHL: She's just hit her 100th day as speaker. She recently called the President to ask for a meeting on infrastructure, but there's no sign that the gridlock that has plagued Congress for years is easing.

STAHL: One of the complaints we've heard is that you don't reach across the aisle because it seems like right now nothing is getting done. You pass things-- whatever it is dies in the Senate.

STAHL: But why doesn't anything get done with the Dreamers?

STAHL: But you're talking about 100 days. This president's been in office for two years plus.

STAHL: But her becoming speaker was in doubt last December when a group in her caucus agitated for a change to someone younger. It was the president, of all people, who rescued her, in that now famous Oval Office meeting.

DONALD TRUMP: You know, Nancy's in a situation where it's not easy for her to talk right now.

STAHL: That did not sit well with her.

PELOSI: Mr. President, please don't characterize the strength I bring to this meeting as a leader of the House Democrats who just won a big victory.

STAHL: Right after the meeting, she walked to the mics in her orange coat, with a whole new image, her ascendance to the speakership no longer in jeopardy. You seem to be one of the very, very few people who have stood up to him and won.

STAHL: Maybe not so much in public the way-- this was televised.

PELOSI: Well, that was his problem. In other words I tried to say let's not have this conversation in the public domain because you're saying things that we have to contradict because they're not true. And he said, "Oh, I want the public to see it." Well, you want them to see that you don't—  don't know what you're talking about? Really?

STAHL: Here's what you've said. You've said, "If someone's ripping your face off. You rip their face off."

PELOSI: Oh yeah, I would do that.

STAHL: And that's what it was like. (LAUGH) And, you know, you have this —

PELOSI: Yeah, I probably said that. Yeah. They just have to know. You throw a punch, you better take a punch.

STAHL: From a grandmother.

STAHL: Then, at the State of the Union, she did her mocking clap and it went viral.

PELOSI: Now, if you go to her own campaign website, you'll see she's touting herself as "The Patron Saint of Shade."

STAHL: This is your new branding of Nancy Pelosi. Kind of like a giant slayer almost, or muscular.

PELOSI: Well, I think that it— No, I think I happen to be a manifestation of the women power that is coming forth now, but only one manifestation.

PELOSI: I think I'm the best person to go forward.

STAHL: She told us that our Democratic values are being threatened, and says unabashedly, that she is the right person to stand up for them.

PELOSI: As our founders said, when they declared independence and established a new nation, The times have found us. The times found Lincoln. Not to be presumptuous to put ourselves in those categories, but the times have found us, not because we're so great, but because of the urgency that—  of the situation that our country faces because of the situation in the White House.

STAHL: In January she swore in the 116th Congress That includes 43 new Democrats from Republican districts who are called the moderates. Plus, the most diverse caucus in history with unprecedented numbers of people of color and a record 91 women. She is given high marks, even among Republicans we spoke to, for her skills as a legislator and effective negotiator. We spoke to a group of Democratic congresswomen, veterans and freshmen, to ask how she wields her power.

STAHL: How many of you are going to be willing to tell me how afraid you are of her?

REP. ANN MCLANE KUSTER: She's the first person in my life that has scared the heck out of me.  I'm honestly-- but I have so much respect for her. And it's this combination of courage and grace.

STAHL: But she does get push back, for instance, from 29-year-old Alexandria Ocasio-Cortez, AOC, who has proposed some out-of-the-mainstream measures. So you are contending with a group in Congress: Over here on the left flank are these self-described socialists, on the right, these moderates. And you yourself said that you're the only one who can unify everybody. And the question is can you?

PELOSI: By and large, whatever orientation they came to Congress with, they know that we have to hold the center. That we have to be m-- go down the mainstream.

STAHL: Well, Medicare for all-- it's not only being pushed by some members of your caucus, but also some of the presidential candidates. And it is allowing the president to say you're all socialists.

STAHL: You have complained, I'm quoting you, President Trump is engaged in an "unconstitutional assault on the Constitution."

PELOSI: That's right. He has.

STAHL: And what do you think the future of our system is if that's true?

PELOSI: Well, I think our future-- is strong enough-- built on a strong foundation to withstand everything including the current occupant of the White House. I don't think for two terms though.