In case it wasn’t clear before, CBS made it very obvious that their journalists are fans of Nancy Pelosi. The This Morning co-hosts on Friday previewed a 60 Minutes interview with the Democrat and gushed over the “feminine,” “steely tough” House Speaker.

Correspondent Lesley Stahl was enthralled: “[Pelosi is] both powerful and she's very feminine. She dresses like a girl, like a woman. She, in a way, she wants to show everybody, you can be steely tough and feminine.” She added, “They’re the same thing and she’s going to show you.”

The journalist even got excited about being “swatted down” by Pelosi: 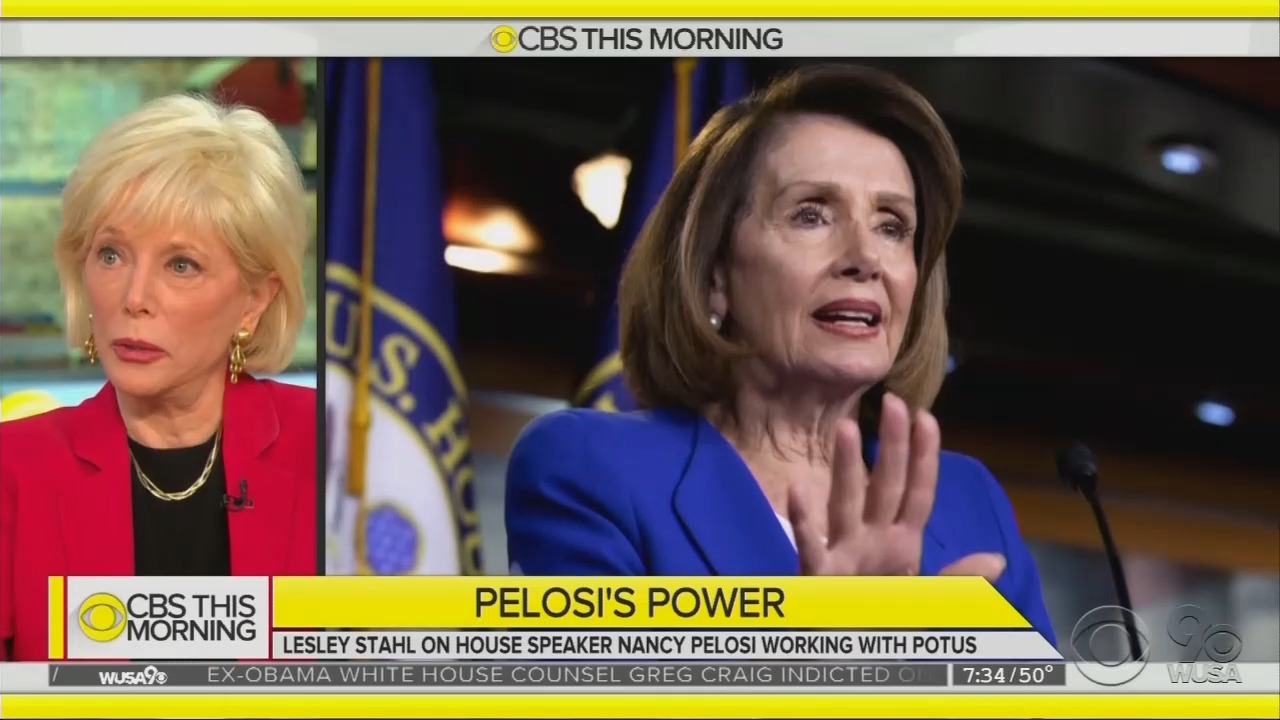 LESLEY STAHL: She is a very strong person and stronger than I think we realized. I mean we the public.

GAYLE KING: How so?

STAHL: Well, because just watch how she stood up to me in this whatever I asked, I was just —

STAHL: Swatted down in a nice way.

As she recounted the 2018 Oval Office fight between Pelosi, Schumer and Trump, Stahl appeared mesmerized, calling it a “transforming” moment:

She stood up to him and walked up in that orange coat and her image was changed on a dime. But the public, I think they knew how tough she was in Congress, but this was a moment that was transforming.

On Monday, the CBS This Morning hosts gushed over the “steady” Pelosi as the “adult in the room.” 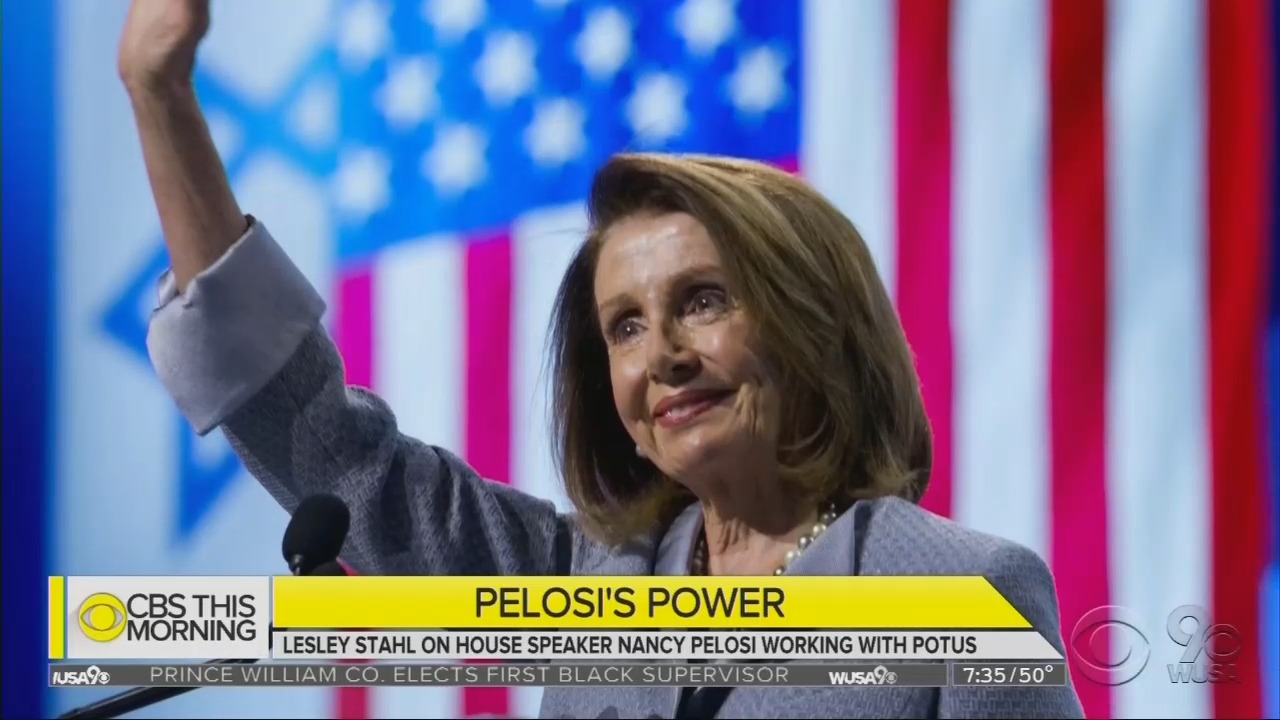 GAYLE KING: House Speaker Nancy Pelosi is opening up for the very first time about her first three months at the Democratic-led House of Representatives. On Sunday’s 60 Minutes, Speaker Pelosi is the first woman to hold the Speaker position and she is the first person since 1955 to regain the gavel after losings it. As Speaker she's one of Washington’ most powerful people with a capital P. Pelosi spoke to Lesley Stahl about the perception that she's a thorn in the side of her Republican colleagues and President Trump.

LESLEY STAHL: One of the complaints we've heard is that you don't reach across the aisle. It seems like, right now, nothing is getting done. You pass things, whatever it is, dies in the Senate.

STAHL: Why doesn't anything get done? The Dreamers?

STAHL: But you're talking about 100 days. This President has been in office for two years plus.

GAYLE KING: She was making a point there, Lesley Stahl, who joins us at the table. You know, there are many people who thought, you know, her time is one. Maybe it's time for new blood, young blood. She has certainly shut all of that down.

STAHL: She did. And you know what? Strangely, President Trump was the one who gave her that opportunity because, remember that meeting in the Oval Office. Major, I’m sure you do. She stood up to him and walked up in that orange coat and her image was changed on a dime. But the public, I think they knew how tough she was in Congress, but this was a moment that was transforming.

GARRETT: And her part about the power is about setting the agenda that is different than the agenda of the first two years of the Trump administration. And you can't get everything done but you can raise new questions and force the opposition party, in this case Republicans, to at least have to respond at some level, which is a predicate for the conversation we're going to have in 2020.

STAHL: Well, she is tough, but she also is running one of the legislative bodies now. She is the Speaker of the House, but she thinks of Congress — she acts that way. So when you say a different agenda, it's a stronger agenda because she has the power now as she says, “Being Speaker is awesome. I can really put these things on the table.” And you know something? She is a very strong person and stronger than I think we realized. I mean we the public.

STAHL: Well, because just watch how she stood up to me in this whatever I asked, I was just —

STAHL: Swatted down in a nice way. That's the other thing about her. She's both powerful and she's very feminine, she dresses like a girl, like a woman. She, in a way, she wants to show everybody, you can be steely tough and feminine. And there’s no contradiction there. They’re the same thing and she’s going to show you.

GARRETT: And there’s also a sense I get this second time around she views the job and her role differently, in more a place of strength than she did the first time.

STAHL: There's no question. She says that she sees herself as equal to the President because the legislative branch and the executive branch are co-equal.

TONY DOKOUPIL: We're a fractured country at the moment and we are also fractured in Congress. Republicans control one chamber. She is leading the other, but her party as well also has divisions. What did she say about healing those?

STAHL: Well, she says we're unified, what she says.

STAHL: Case closed. Even as the left is nipping at her, the left is nipping at her. She brought in 43 new public district. She knows she has to hold them. She can't allow those districts to flit back and they're more centrist or conservative, whatever. And so, she needs to bring the far left, the socialists in her caucus, she needs to make sure that they don't jeopardize those seats.

DOKOUPIL: Does she acknowledge there are socialists in her caucus? She might take issue.

KING: She knows the number.

STAHL: There’s prog— It's confusing. There really are only two or three socialists and then are progressives, and they're a much larger faction. And when you speak of the group of larger, left liberals, they're a larger group trying to change her agenda a little bit.

KING: I know, we gotta go, Lesley. But do you think even the President is a little bit intimidated by her? He does have a nickname for her other than Nancy.

KING: I think that dynamic is very interesting between the two of them.