ABC on Tuesday night and Wednesday morning skipped the “political crisis” engulfing Virginia’s Lieutenant Governor as one of the women accusing Justin Fairfax of sexual assault has now spoken out. NBC’s Today and CBS This Morning, however, both offered full reports on Vanessa Tyson appearing in public for the first time since detailing her claims against the Democrat.

On the Today show, Hoda Kotb reminded, “Now to the political crisis in Virginia where the state's top two politicians are embroiled in scandal.” Reporter Geoff Bennett informed, “In her first public appearance since accusing Virginia’s Lieutenant Governor of sexual assault, Dr. Vanessa Tyson spoke to a capacity crowd at Stanford University about sexual consent and the Me Too movement.”

Despite three hours of air time on Tuesday and Wednesday (World News Tonight, Nightline and Good Morning America), ABC ignored the latest from Virginia, including Tyson getting emotional at Stanford University while talking about sexual assault. On Today, reporter Geoff Bennett explained: 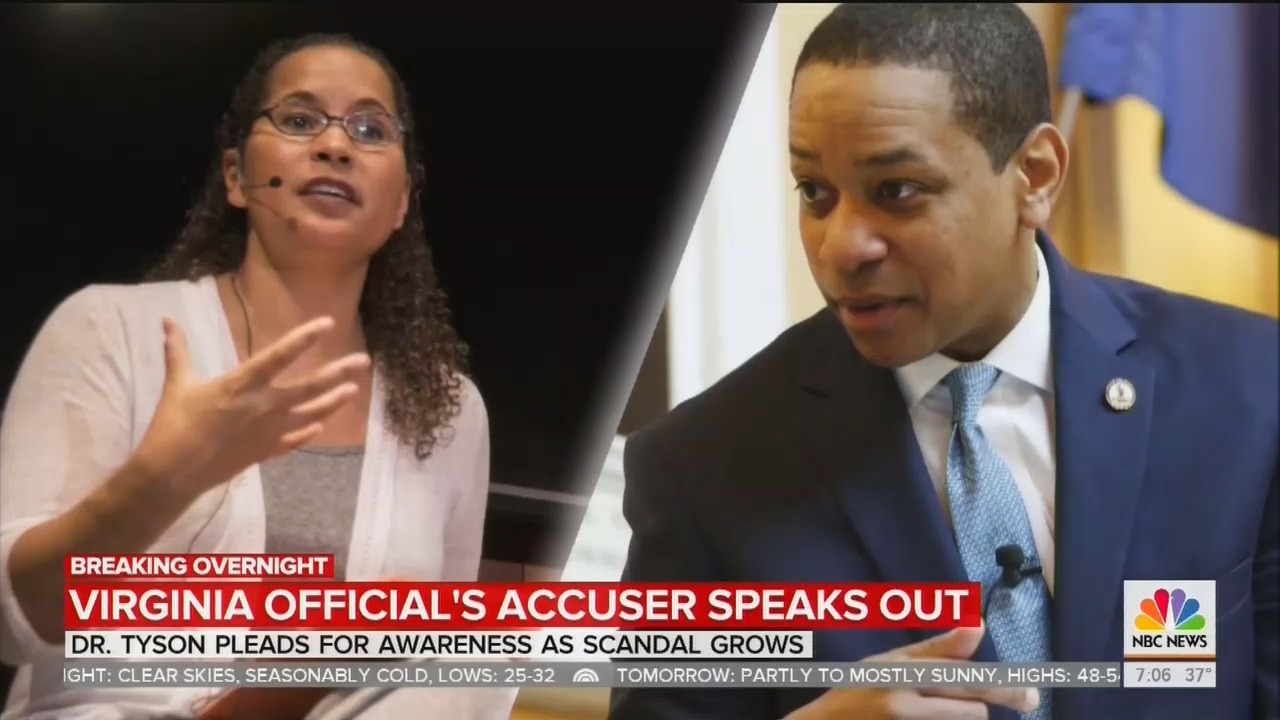 GEOFF BENNETT: Tyson not directly addressing her 2004 encounter with Fairfax that led to her accusation against him. But the topic hung in the air.

VANESSA TYSON: I think another thing I would say is speaking as a professor at a women's college, sometimes you have to lead by example no matter how hard it is.

On CBS This Morning, Gayle King described, “The professor who says Virginia's Lieutenant Governor Justin Fairfax sexually assaulted her is speaking publicly for the first time since her story came out.”

Again, imagine if the person at the subject of these accuastions was a conservative or a Republican. On Monday, CBS told viewers to understand the “context” behind the allegations and that Fairfax “wants to make this right.”

Transcripts of the NBC and CBS segments are below. Click “expand” to read more:

HODA KOTB: Now to the political crisis in Virginia where the state's top two politicians are embroiled in scandal. Overnight, we directly heard from the first woman accusing the lieutenant governor of sexual assault. NBC’s Geoff Bennett has more on what she had to say. Hey, Geoff. Good morning.

GEOFF BENNETT: Hoda, good morning. In her first public appearance since accusing Virginia’s Lieutenant Governor of sexual assault, Dr. Vanessa Tyson spoke to a capacity crowd at Stanford University about sexual consent and the Me Too movement, topics she studied as a researcher and professor. Doctor Tyson, though avoided mentioning her own account of sexual assault. Instead, she spoke of an advocate for other victims.

BENNETT: Dr. Vanessa Tyson speaking publicly for the first time since entering the national spotlight, accusing Virginia’s Lieutenant Governor of sexual assault, a charge he denies. The political science professor appeared Tuesday evening at a symposium on sexual violence and the Me Too movement at Stanford University.

TYSON: Make no mistake. This is — It's an epidemic. It is killing us, you know, slowly, quickly, but it is killing us. It is taking everything out of ourselves just to function in this world and to try to make it a better place. I’m sorry.

TYSON: As she told her story, we felt the pain she so visibly demonstrated.

BENNETT: Dr. Tyson now represented by Blasey Ford's legal team. Tyson not directly addressing her 2004 encounter with Fairfax that led to her accusation against him. But the topic hung in the air.

TYSON: I think another thing I would say is speaking as a professor at a women's college, sometimes you have to lead by example no matter how hard it is.

BENNETT: Justin Fairfax flatly denies the sexual assault allegations leveled against him by Tyson and a second woman, Meredith Watson, saying the encounters with the women were consensual. [To Justin Fairfax] Anything you want to say by the people of Virginia?

JUSTIN FAIRFAX: We have called for an independent investigation and I'm still very confident in the truth. Thank you so much.

BENNETT: The Lieutenant Governor says he wants to clear his name. But a law enforcement official tells NBC news the FBI has no jurisdiction to do so.

SAVANNAH GUTHRIE: Okay, Geoff. So, write this down. We know the impeachment threat against Fairfax has fallen apart. But both Dr. Tyson and he are calling for investigation. So, now that the FBI isn't going to open an investigation, where does that leave us?

BENNETT: The Virginia state legislature could pursue an independent investigation. At this point it's unclear if that might happen. Now, overnight Dr. Tyson’s legal team sent a letter sent to the Virginia state officials about all of this, part of which reads, “Whatever the forum, we expect that the Virginia legislature will oversee a thorough, fair and expeditious investigation and take appropriate action to hold Lieutenant Governor Fairfax responsible for his conduct, both past and present.” Again though, we should say Justin Fairfax categorically denies the allegations.

GAYLE KING: The professor who says Virginia's Lieutenant Governor Justin Fairfax sexually assaulted her is speaking publicly for the first time since her story came out. Vanessa Tyson is her name. Vanessa Tyson did address her claim directly last night at Sanford University. She was on a panel there. She focused on supporting victims. Tyson is one two women whose allegations have brought calls for Fairfax to resign. Ed O’Keefe is following this story and joins us with the latest. Ed, good morning.

ED O’KEEFE: Good morning, Gayle. Last night's symposium at Stanford University focused on the impact of the Me Too movement and had been planned for months, long before Tyson publicly accused Lieutenant Governor Fairfax of assault. Tyson never named him but seemed to explain her motivation for going public.

VANESSA TYSON: Sometimes you have to lead by example. No matter how hard it is.

TYSON: There's a recurring theme at least when women come forward that this — deliberate attempt to try to undermine someone's credibility.

O’KEEFE: After Tyson's allegations became public, Lieutenant Governor Fairfax pointed to what he called inconsistencies in her story, claiming she never mentioned the 2004 incident until last week, despite making an earlier video in which she recounted other instances of being sexually molested as a child. Fairfax has said he won't resign, maintaining their sexual encounter was consensual. Tyson addressed the issue of defining consent.

O’KEEFE: Virginia lawmakers have decided to delay introducing articles of impeachment against Fairfax, pending a further investigation. Tyson's team responded, saying they expect it to be “thorough, fair, and expeditious.” On Tuesday night, Tyson expressed her -- Tyson expressed her hope that all victims of sexual violence continue to come forward.

TYSON: They have nothing to be ashamed of. And they are not alone.

O’KEEFE: A spokeswoman for Fairfax said the Lieutenant Governor has no specific comment on what Tyson said last night. He's previously said that due process should be respected for him and his accusers. Fairfax remains in line to replace the state's embattled governor, Ralph Northam, still dealing with the fallout over a racist yearbook photo.