Classless ABC Thrusts Sexist 'Art' at Ivanka Trump: ‘How Does It Make You Feel?’

ABC on Friday thrust a sexist, bizarre “art” project at Ivanka Trump and demanded to know “how does it make you feel?” Unsurprisingly, she didn’t like it. In an interview for Good Morning America, Abby Huntsman tried to hand a picture of a 16-year-old model vacuuming up crumbs to the White House adviser.

Holding the photo Huntsman needled, “A controversial new art exhibit in Washington, D.C .that invites people to essentially throw crumbs at a model that resembles you as she vacuums the crumbs up.”

Well, I think it's a very sexist representation of a woman. But what bothered me about this image is that they hired a 16-year-old girl to stand there and have crumbs thrown at her for two hours a day for a couple of months. 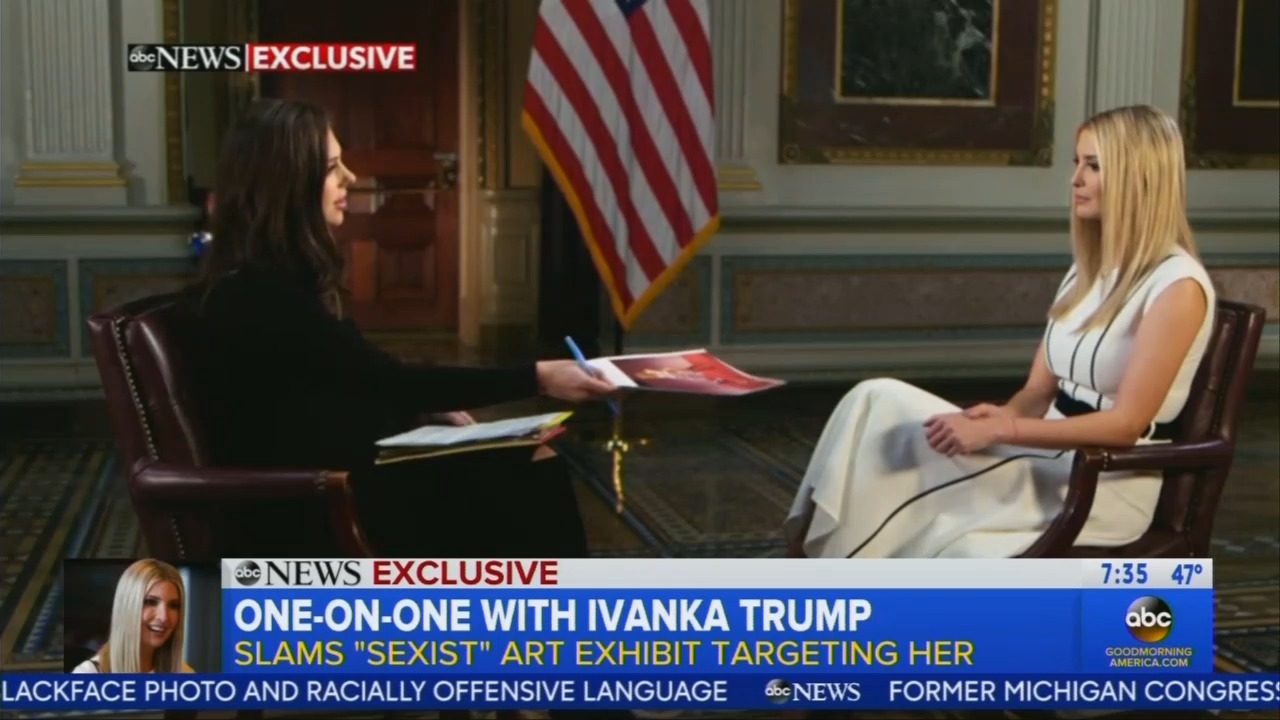 ABC is the same network that complained about Donald Trump’s sexist dog whistle attacks on Hillary Clinton. In August of 2016, the network saw secret, sexist “code” in the then-candidate’s criticisms of Clinton.

Yet ABC promotes “art” featuring an underage girl having crumbs thrown at her while dressed as Ivanka Trump?

Regarding an economic empowerment initiative for women that the President mentioned during the State of the Union, Huntsman, a co-host on The View, brought it all back to immigration:

You know you'll have people watching, say, this sounds everyone can get behind women empowerment but how does Ivanka Trump reconcile pushing an initiative to empower women with policies from the White House like separation of families that was such an emotional thing to go through?

GEORGE STEPHANOPOULOS: We're going to begin with our exclusive interview with Ivanka Trump. The first daughter is spearheading a new White House initiative to help tens of millions of women in the developing world. She sat down with Abby Huntsman from The View who is here by my side. This is a pivotal moment for the White House right now, for Ivanka because she's not only first daughter but senior White House adviser.

ABBY HUNTSMAN: She is and she doesn't do a lot of interviews as you guys know. So obviously this was for the initiative and there was nothing off limits in this conversation. Ivanka Trump talking about the Russia investigation, the very personal attacks she's had to endure and, of course, making quite a telling remark about when she goes public with those opinions. Take a look. State of the Union, what, just a couple of days ago.

HUNTSMAN: One of the biggest moment was seeing the women there, seeing how many women are in Congress and there was that moment when the president cheered them on. But a lot of them, Democrats, ran against his policies. Were they cheering with him or in spite of him?

IVANKA TRUMP: Well, I think they were proud of themselves as they should be. Everyone fought a hard race and they won. They earned their seat at the State of the Union and I think we should always celebrate the inclusion of more voices in Congress. So I think it was a beautiful moment.

HUNTSMAN: The State of the Union also marked a big moment for Ivanka personally, that night the announcement of a plan she spent two years spearheading.

HUNTSMAN: The goal? To help 50 million women in the developing world by 2025.

IVANKA TRUMP: This is the first ever umbrella approach, all of government approach to saying we know it is smart to invest in women in the developing world. We know it's smart to unleash their potential. It's a good use of development dollars. Let's coordinate all the work that's being done across the U.S. government.

HUNTSMAN: You know you'll have people watching, say, this sounds everyone can get behind women empowerment but how does Ivanka Trump reconcile pushing an initiative to empower women with policies from the White House like separation of families that was such an emotional thing to go through? [Cut away from interview.] It was last spring the administration's decision to prosecute every adult that crossed the southern border illegally led to the separation of nearly 3,000 children from their families. President Trump told lawmakers Ivanka showed him photos of children in detention centers and it was her that encouraged him to end the zero tolerance policy.

IVANKA TRUMP: My job as a member of this administration is not to share my viewpoint when they diverge. Subsequently, I was asked the question and gave an answer. But my role in this regard is not to — is not president of all women's issues or running all women's issues across the United States government.

HUNTSMAN: Do you wish that maybe you had spoken publicly to the American people?

IVANKA TRUMP: I think that when you hear me start to speak publicly on an issue that's active, it's because my voice isn't being heard privately.

HUNTSMAN: The Mueller investigation sounds like it's coming to an end at some point soon. You said before, nothing concerns you.

HUNTSMAN: Some of the President's former aides have now been charged and people are saying, look, the walls are closing in. Sitting here now knowing it is almost over, are you concerned about anyone in your life that you love —

IVANKA TRUMP: There's nothing there. Yet, it's created weekd and weeks and months of headlines. So, no, I have zero concern. 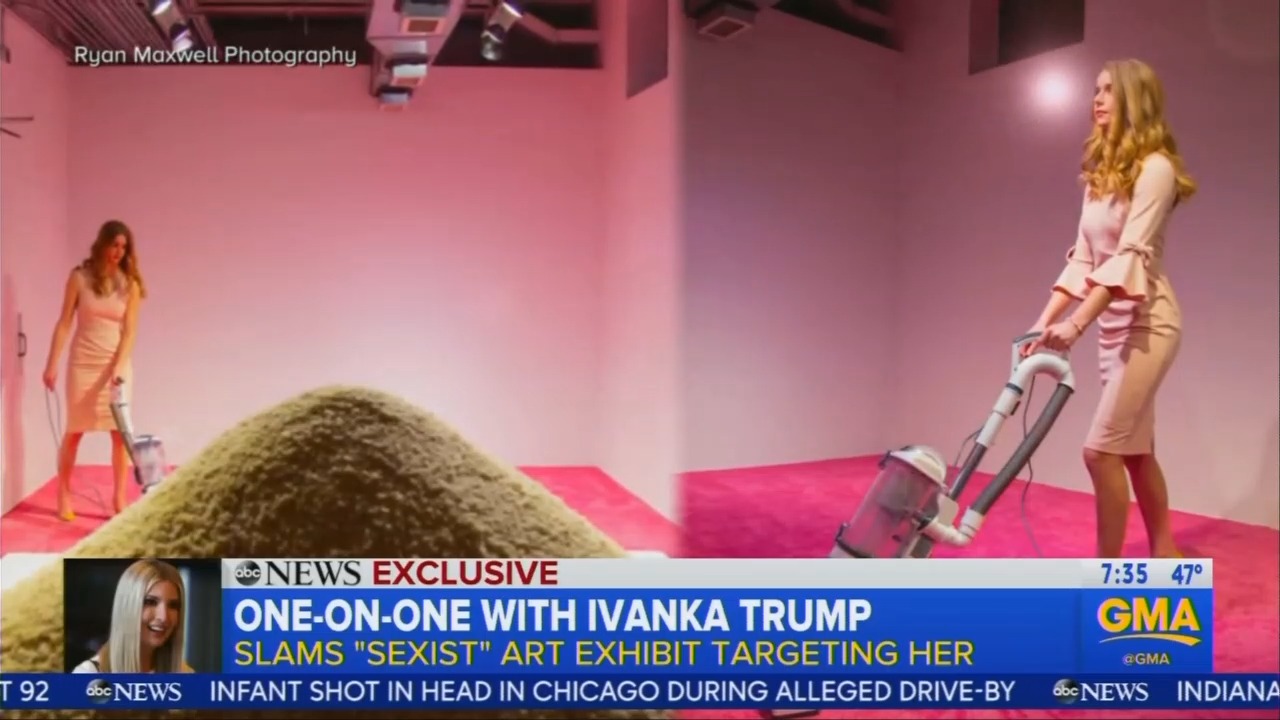 HUNTSMAN: Another headline making news, a controversial new art exhibit in Washington, D.C .that invites people to essentially throw crumbs at a model that resembles you as she vacuums the crumbs up. When you see this, how does it make you feel?

IVANKA TRUMP: Well, I think it's a very sexist representation of a woman. But what bothered me about this image is that they hired a 16-year-old girl to stand there and have crumbs thrown at her for two hours a day for a couple of months. So I have a real problem with that and that was what infuriated me more than anything.

HUNTSMAN: We started talking about women. When you think about the initiative that you really launched today, who are the women that come to mind that are your heros?

IVANKA TRUMP: Oh, wow, so many women inspire me. The women I meet when I travel.

HUNTSMAN: Is Melania one when you think about women that you look up to?

IVANKA TRUMP: Melania is amazing. I've known Melania since I was 16 years old. My mother, my grandmother, God bless her, she's 92-years-old and lives with me half the year and in the Czech Republic for half the year so I have tremendous people in my family I admire deeply.

HUNTSMAN: Ivanka also sharing that with her role in the White House, she’s facing a harsher spotlight than ever before. I know she used to enjoy sharing images of her children that we all saw. But now wants to shield them from all of that negativity. Something we can relate to. I grew up in politics. My dad is now ambassador to Russia. I understand that scrutiny. But I don't imagine you'll hear from her a lot more. She talks about her passion is policy behind closed doors.

STEPHANOPOULOS: Yeah. She kind of comes out for the initiatives but plays a big role behind the scenes and wants more of that to be private.

HUNTSMAN: She says when you see anything bipartisan happening, whether it's criminal justice reform, human trafficking, that is myself and my husband working behind the scenes. That's what we're doing and that's the impact we'll have. So, again, she doesn't love she's interviews, but she's a senior adviser so it's important for the country to hear from her and ask some of these tough questions but, look, she's in a difficult role.