Though Cory Booker has a long history of distortions and making things up, two of the three networks on Friday avoided this inconvenient fact while hyping the Democrat’s just announced presidential bid. Only ABC’s Good Morning America mentioned Booker’s tendency towards “embellishing” the truth.

GMA reporter Tom Llamas highlighted Booker’s resume and background as a Rhodes scholar. But he also reminded of Booker: “Critics say he, at times, has embellished the truth to gain favor, including earlier in his political career when he referenced a person he called an alleged drug dealer.”

But sources tell National Review Online that the central character in one of Booker’s oft-repeated stories — T-Bone, the drug pusher who the mayor has said threatened his life at one turn and sobbed on his shoulder the next — is a figment of his imagination, even though Booker has talked about him in highly emotional terms and in great detail. 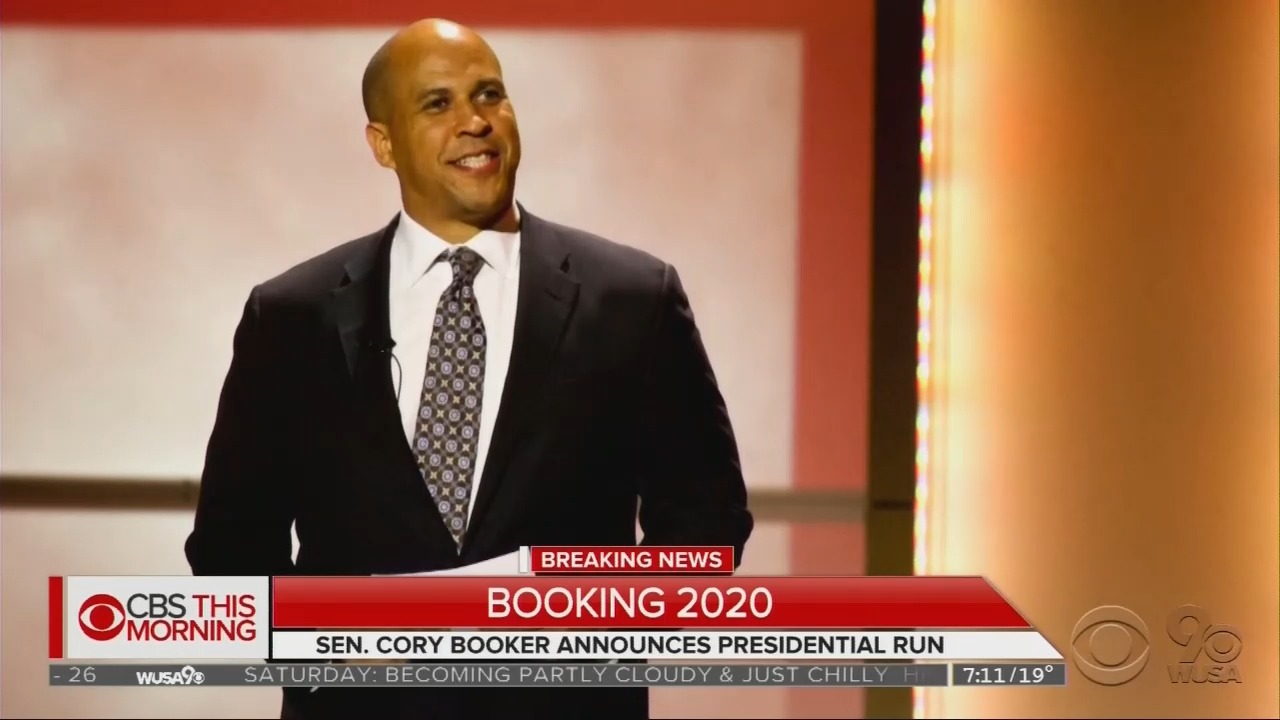 Over on CBS This Morning, reporter Ed O’Keefe skipped any mention of “T-Bone.” He instead parroted talking points from the senator: “Booker’s campaign is expected to focus on addressing wealth inequality, and especially on the idea of restoring a sense of unity in the country.”

In the midst of complimenting Booker, O’Keefe inserted some fairness by calling the Democrat “strongly partisan.”

Booker has at times tried unifying the place by working with Republicans like Rand Paul on criminal justice reform, but he's also been a strongly partisan Democrat, notably during the confirmation hearings for Supreme Court justice Brett Kavanaugh. 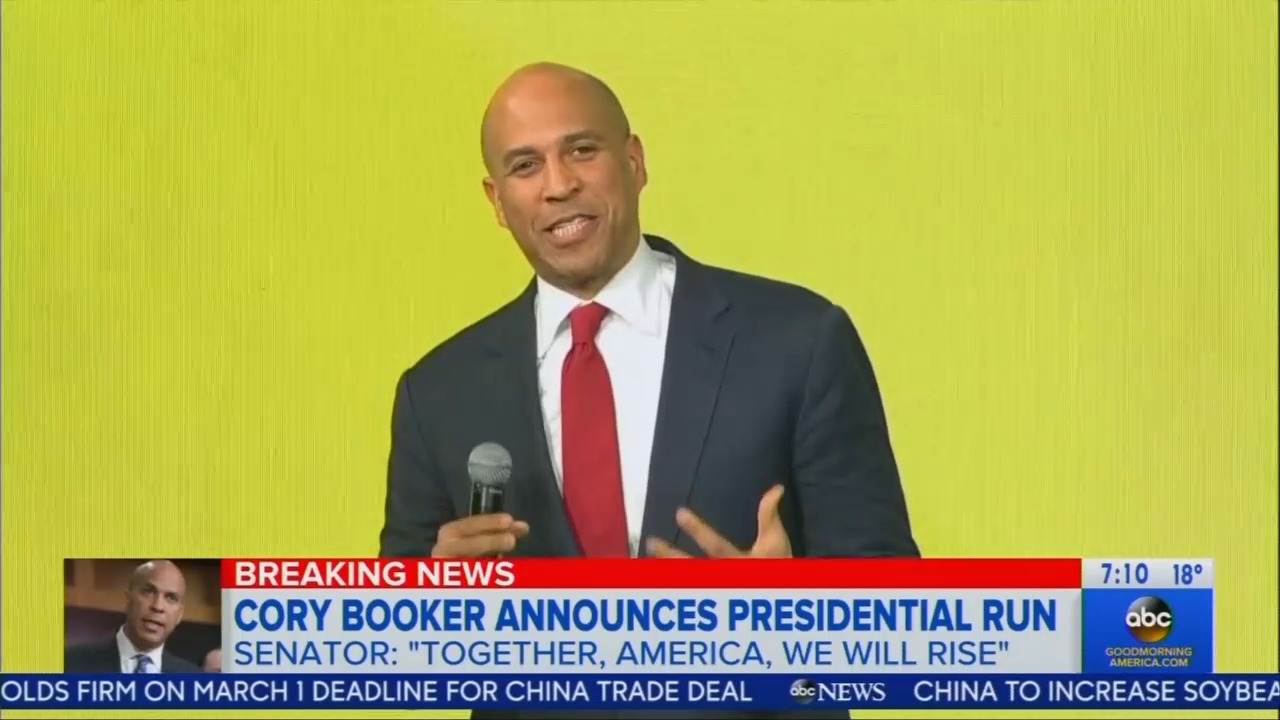 Speaking of Kavanaugh, that’s another example of Booker’s problem with the truth. In 2018, he made a dramatic show of “breaking the rules” and releasing documents on the Supreme Court nominee... documents that were already cleared for public release.

Transcripts of all three reports are below. Click “expand” to read more:

PETER ALEXANDER: And new this morning as it relates to 2020: New Jersey Senator Cory Booker is officially launching his campaign for president. Booker joins a diverse and growing list of Democrats looking to unseat President Trump in 2020. The former Newark, New Jersey,
mayor heads to Iowa next weekend and then South Carolina and New Hampshire to begin his campaign.

GEORGE STEPHANOPOULOS: We also have some breaking political news just. Senator Cory Booker has just become the latest Democrat to enter the race for president. He's joining a growing field. You see it right there. Nine official candidates right there and our chief national correspondent Tom Llamas tracking the race. Good morning, Tom.

TOM LLAMAS: Tom, good morning to you. As you just mentioned, we know the Democratic field will be crowded headed into 2020 and we have a new name to add to that list. New Jersey Senator Cory Booker telling supporters he will be running for president and also Booker posting this video.

LLAMAS: Senator Booker, 49 years old, decided to announce today, the start of black history month. The former mayor of Newark and Rhodes scholar has already been very active on the campaign trail by supporting other Democrats during the midterms and raising a lot of money for Democratic causes. Booker has an active and very large following on social media. As a mayor and senator he has been able to garner major news headlines, including the time he rescued a woman out of a burning home in Newark when he was mayor there. But critics say he, at times has embellished the truth to gain favor, including earlier in his political career when he referenced a person he called an alleged drug dealer. He called this person T-Bone but several reports say T-bone wasn't an actual person but a composite of people Booker had met. We know he that in the coming weeks, Booker will be in Iowa, South Carolina and new Hampshire, George. He is getting out there early and to important states.

STEPHANOPOULOS: We will be watching him in the Senate.

JOHN DICKERSON: Another Democrat is ready to challenge President Trump in 2020.

DICKERSON: Senator Cory Booker sent that message to supporters this morning. The New Jersey Senator is the fifth official candidate. While three others have formed exploratory committees. Ed O'Keefe is on Capitol Hill. Ed, it's getting crowded out there. Good morning.

ED O’KEEFE: Sure is, John. Senator Booker has long been seen as a potential Democratic presidential candidate. He is New Jersey's junior senator and the 49-year-old has served in the Senate since 2013. Before that, he had served as mayor of Newark for more than seven years. Booker’s campaign is expected to focus on addressing wealth inequality, and especially on the idea of restoring a sense of unity in the country. He spent much of the last year road testing the message on the campaign trail for fellow Democrats and during visits to early primary states. On Capitol Hill, notably during the confirmation hearings for Supreme Court justice Brett Kavanaugh. Booker is scheduled to head to Iowa next week for campaign stops. Next weekend is also when Massachusetts Senator Elizabeth Warren tells us she will formally kick off her campaign. John?