MSNBC’s Hallie Jackson and Ali Velshi on Thursday fulminated over Donald Trump’s move to stop Nancy Pelosi from going on her international trip, deriding it as a “sophomoric” “power play.” After insisting how common these congressional delegations visits are, Jackson complained, “What is unusual is what appears to be this tit for tat.”

Regarding the President’s claim that this move was made so that both could be in Washington to negotiate, Jackson scoffed, “Let’s call that for what it is. That’s White House spin. Of course this is a power play.”

She added, “This is a move from the president to counter Nancy Pelosi’s ‘disinvite.’” Well, of course it is. But journalists weren’t similarly outraged by Pelosi’s “power play.” MSNBC Live co-host Ali Velshi derided, “There are some who would say that this feels sophomoric to have sent the letter with the people on the bus.”

Again, some might call both moves cynical efforts to embarrass the other. But why are journalists only outraged now?

ALI VELSHI: White House spokesman Hogan Gidley says she has a standing invitation and the President would sit down with Nancy Pelosi to negotiate opening the government and securing the border anytime. I think we just want a little context here because there are some who would say that this feels sophomoric to have sent the letter with the people on the bus. 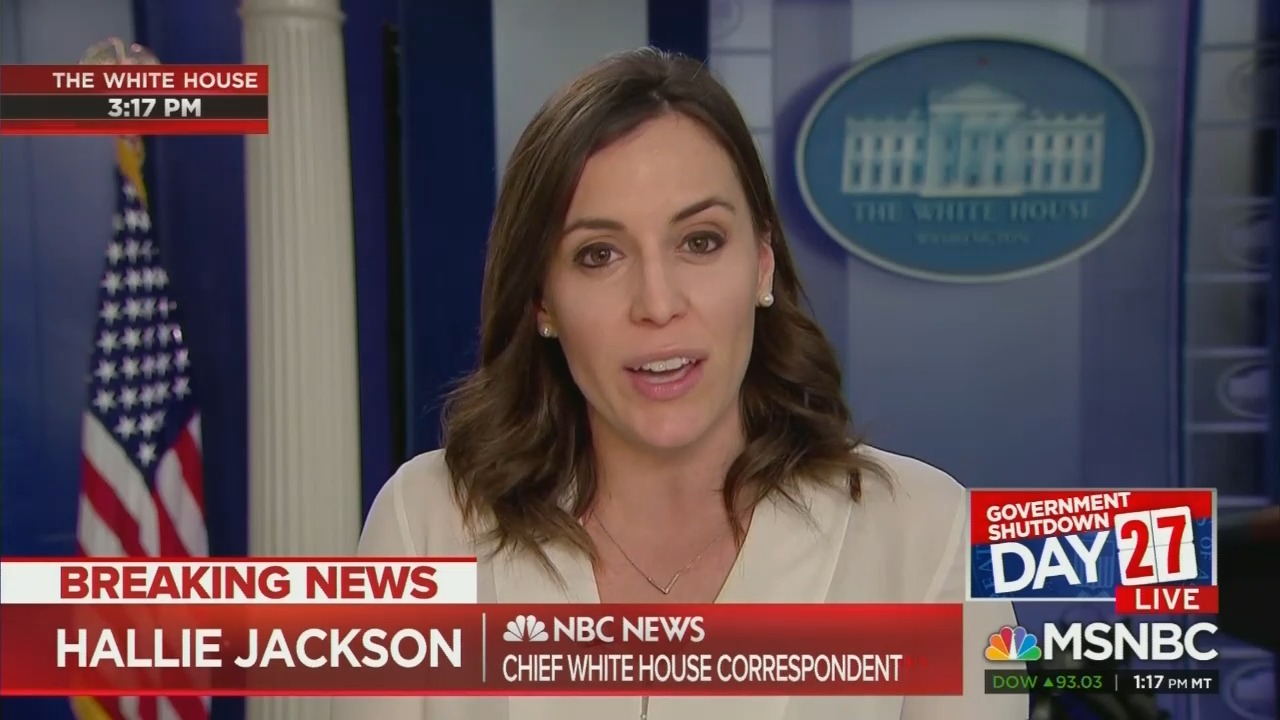 HALLIE JACKSON: : We're also working to find out whose decision this was, who came to President Trump and said to him, “You know, Speaker Pelosi has this trip coming up.” And how this all unfolded, Ali. Those are some of the threads we are pulling.

ALI VELSHI: It is unorthodox to say the least. I'm sure in the history of presidencies and conflicts with Congress, we’ve had discussions. But the way this went down, just give us some sense of it from the White House perspective. But from the congressional perspective, a bunch of members of Congress got on a bus, that's the way they got there, going to Joint Base Andrews where a plane was ready to take off when this news occurred. What happened on the White House side?

JACKSON: They were supposed to leave at three. Which the White House new, which is why we are told this letter was sent over to Speaker Pelosi's office and then released publicly about the president essentially publicly pulling that military plane that they were all about to get on.  Unorthodox is certainly a word for it. Think about it these CoDels as they are known and as Garrett Haake on the hill knows, happen all of the time, during recesses, on breaks. They’re bipartisan. Democrats, Republicans. There is staff delegations that goes to these sometimes. So that is not at all uncommon for this kind of travel and for this to happen during breaks. What is unusual is what appears to be this tit for tat. Now, the White House will and a White House official has pushed back on that this is the President’s move to counter Nancy Pelosi. Let’s call that for what it is. That’s White House spin. Of course this is a power play. This is a move from the president to counter Nancy Pelosi’s “disinvite,” which, by the way, the Trump campaign is now sending out an invite raising money off of. This disinvitation, if you will.