NewsBusters Time Machine: The First Speaker Pelosi Was a ‘Moment to Savor’

Here at the Media Research Center’s NewsBusters, we have hundreds of thousands of hours of liberal newscasts in the vault at MRC headquarters. In our new series The NewsBusters Time Machine we’re going to pull out some of that bias and show how yesterday’s liberal spin connects with the bias of today.

Nancy Pelosi is Speaker of the House... again. The New York Times hailed the returning Democrat as an “icon.” CNN ridiculously cheered the “non-partisan” “girl power” of the Speaker. But none of this is new. In January of, 2007, CNN gushed over the first Speaker Pelosi. CNN journalist Dana Bash could hardly contain herself as she hyped: “A moment to savor.”

Appearing on the January 4, 2007 AC 360, Bash marveled, “Nancy Pelosi seized the gavel and, with it, power for the Democrats, an ambitious agenda, but, today, history, the first female Speaker, second in line to be president.”

At the time, I wrote on NewsBusters about the segment: 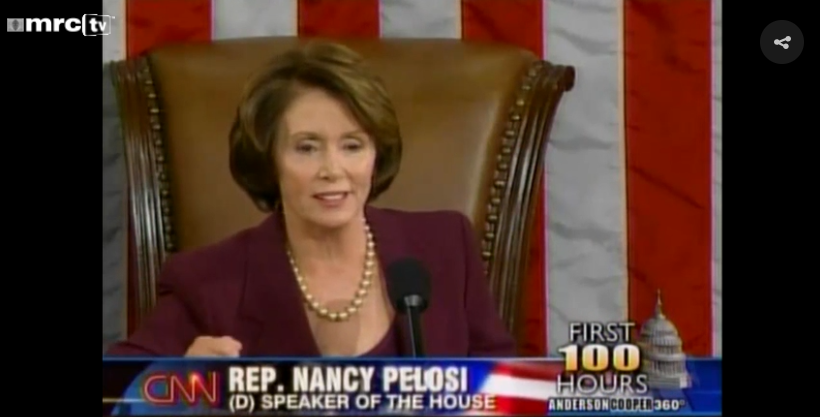 The CNN correspondent would likely argue that she meant the first female Speaker is an occasion to appreciate. However, imagine this was 1994, would Bash describe Newt Gingrich being sworn in as the first Republican Speaker in 40 years as "a moment to savor?" It’s conceivable the term would have been used, but likely only with the qualifier that such a moment would be relished by Republicans.

ANDERSON COOPER: We're here to cover another front-page day, the first female House speaker, the first Muslim congressman, the first Buddhist, the first time Democrats have controlled both the House and Senate in the Bush administration. Day one of a Congress that you elected, because you said you wanted big changes. Day one for lawmakers, who are promising a whole host of legislation in their first 100 hours of work. We're here tonight to help keep them honest. So, throughout the hour, we will be looking at how Democrats hope to make law. First, though, CNN's Dana Bash on how they are making history.

DANA BASH: A moment to savor -- Nancy Pelosi seized the gavel and, with it, power for the Democrats, an ambitious agenda, but, today, history, the first female Speaker, second in line to be president.

NANCY PELOSI: For our daughters and our granddaughters, today we have broken the marble ceiling.

BASH: Symbols of a new Democratic era everywhere: Hollywood actor Richard Gere in the gallery, former Republican Speaker Dennis Hastert in the back with the rank-and-file. Bipartisanship was the buzz word, from the House--

PELOSI: I accept this gavel in the spirit of partnership, not partisanship.

BASH: –to the Senate, where Democratic Leader Harry Reid began the day with a get-together for senators from both parties. The Vice President swore in 33 senators, giving Democrats their razor-thin majority.

BASH: Yet, Democrats wasted no time challenging the President on the war.

PELOSI: Nowhere were the American more -- people more clear about the need for a new direction than in the war in Iraq.

BASH: But, first, the House will debate new ethics measures, like banning gifts from lobbyists. Next week, House Democrats start the clock on 100 legislative hours of campaign promises. The Senate will work at a slower pace. Passing anything there requires compromise with Republicans. By this was a day for family to come watch history unfold, the first Muslim congressman, 43 black lawmakers, 90 women, led by the new House speaker. The day ended with a traditional phone call from the House speaker to the President, informing him the new Congress is in session. Mr. Bush told Nancy Pelosi he's ready to work with her, an olive branch, but also a reminder, she may wield the speaker's gavel, but he still wields the veto pen.