The historic Nancy Pelosi is going to make history again. That’s the cheering response from MSNBC on Thursday as journalist Kasie Hunt offered the equivalent of a press release for the hard-left Democrat. Describing the women being sworn in as new members of Congress, Hunt touted the incoming Speaker as a “historic figure.” The MSNBC graphic for the segment proclaimed, “Pelosi Poised to Make History Again By Becoming House Speaker.”

Hunt informed viewers that the Democrat “views herself as somebody who has collected years of wisdom and experience.” Well, it’s good to know that Pelosi thinks Pelosi is very impressive.

Despite the fact that the shutdown is still ongoing with no resolution in sight either way, Hunt declared Pelosi the champion. Regarding her negotiating prowess, the journalist insisted:

Pelosi has a lifetime American Conservative Union score of 2.5. So that might explain the enthusiasm. As the MRC’s Brent Baker noted, this journalistic love affair with the Congresswoman isn’t new. In 2007, ABC cheered Pelosi as someone who “takes care of the children and the country.”

Expect much more of this type of Pelosi coverage in 2019.

HALLIE JACKSON: Kasie, give us a sense of what’s going on behind the scenes on Team Pelosi as she is just now hours away from being expected to be sworn in as Speaker of the House. 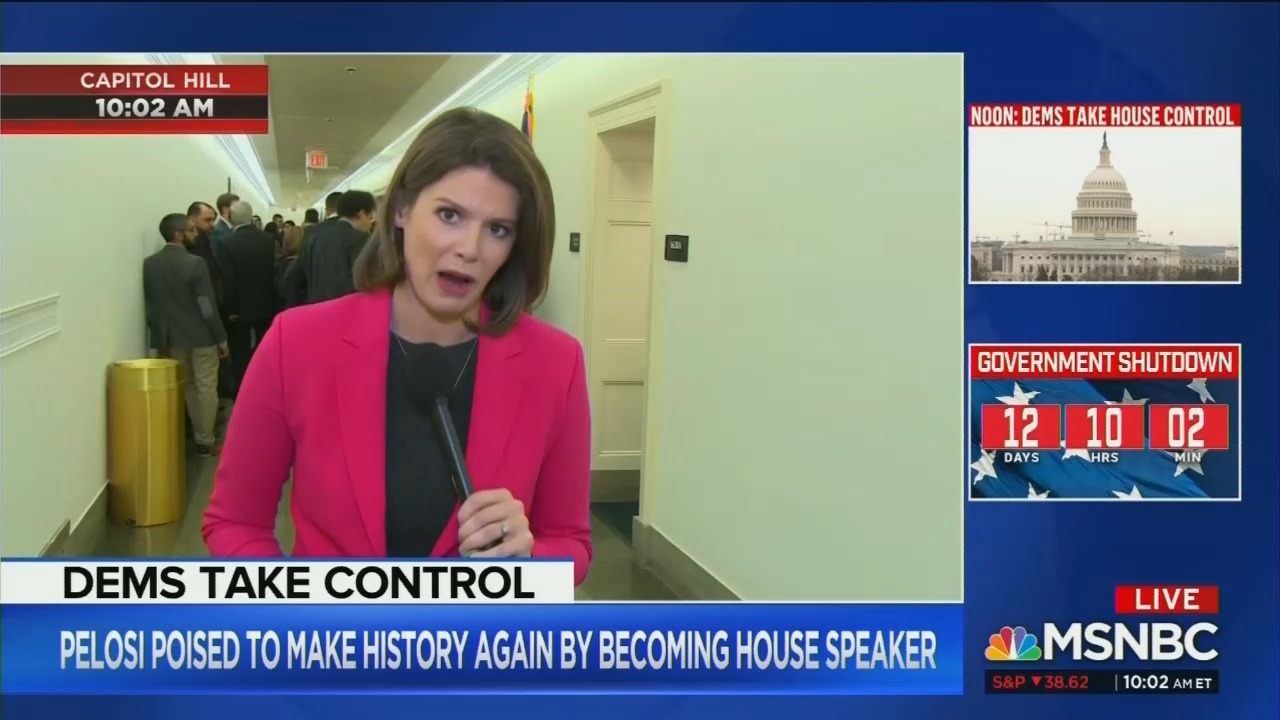 KASIE HUNT: Sure, Hallie. This has been a very careful road for Nancy Pelosi. She has worked very hard within her own caucus to make sure that this was going to be a triumphant moment for her. And just to give you a little context. We are here in the Longworth House office building. This is swearing in day. We’re actually at Rashida Tlaib’s office. You can see behind me quite a crowd here. She, of course, is that woman from Michigan who you may remember was dragged out of a Trump and decided she was going to run for Congress. And lo and behold she won. She is a part of a historic class of women here in Congress that will be led by Nancy Pelosi who is a historic figure. She is going to reclaim her position as Speaker, the most powerful woman in American politics.

And we've already seen how some of that dynamic plays out on the national stage and that meeting with the President in the Oval Office where, you know, Nancy Pelosi walked out in that red coat that is now a famous scene as kind of the victor, triumphant over the President in that meeting. I think that gave you a little taste of what this might be like. Nancy Pelosi is a veteran legislator and deal maker. Her daughter was on TV yesterday saying that she'll cut your head off and you won't even know that you're bleeding, which is a remarkable thing for a daughter to say about their mother. But It really kind of captures how effective Nancy Pelosi has been. You will remember many other Speakers past the rest, all men, often deposed by their party or facing a scandal. Not the case here with Nancy Pelosi. She pushed ObamaCare through the House under pretty tough circumstance when she was Speaker last time around.

Now she views herself as somebody who has collected years of wisdom and experience as the right general, is how she has been kind of phrasing it behind the scenes to people as she tries to win them over, to lead the troops into this fight. So, I also think you will see her being careful in her balancing act. And you saw this in her interview with Savannah Guthrie and I know Garrett Haake will talk about the line she has to walk with impeachment. Her caucus is unified right now. But that does not mean there will be hurdles on the horizon. Hallie?