CBS: Mike Pence ‘Looked Like Elf on the Shelf’ at White House Meeting 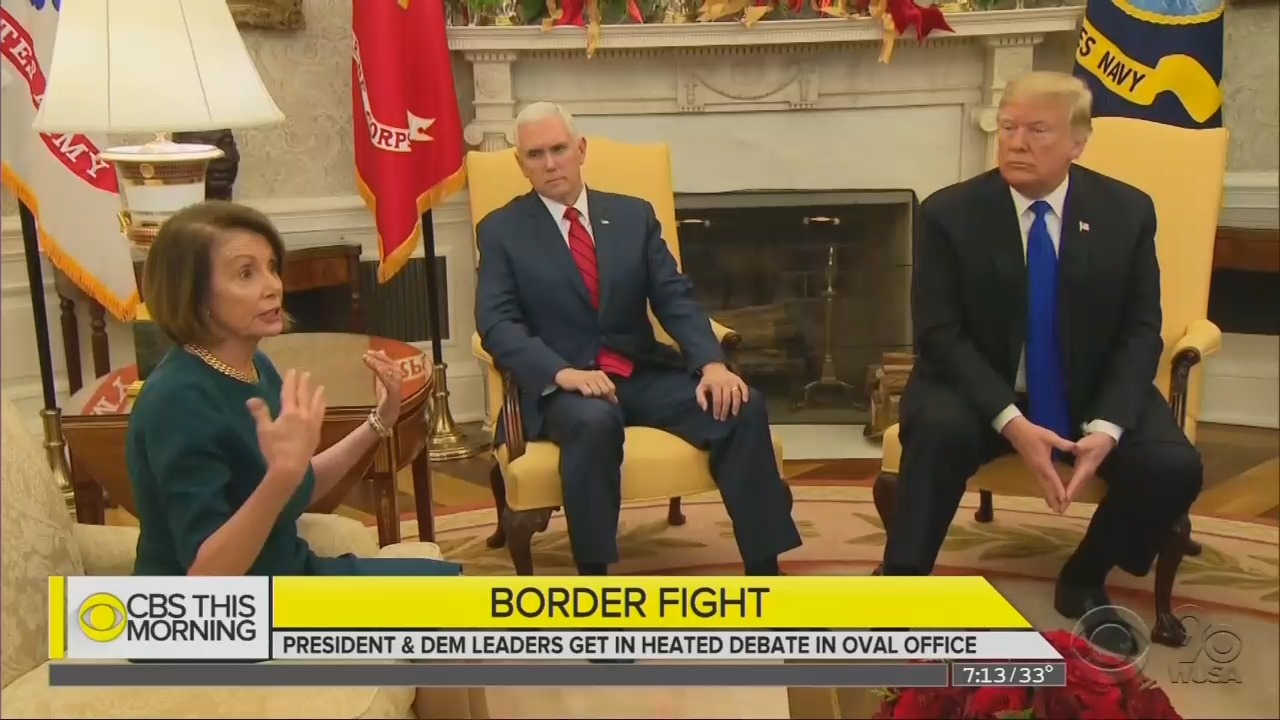 CBS This Morning on Wednesday mocked Mike Pence's silence during a White House meeting with Donald Trump, Nancy Pelosi and Chuck Schumer. Co-host Norah O’Donnell derided the Vice President as looking like an “Elf on the Shelf sitting there.”

After playing video of Trump arguing with Pelosi and Schumer, O’Donnell took the Democrats side in a potential shutdown fight: “Just a reminder, the President controls —  and his party controls —  Congress, it's all Republican-controlled at this current point.” Co-host John Dickerson agreed: “Right. They could solve this shutdown thing pretty quickly.”

After Gayle King and John Dickerson described Pence as looking “uncomfortable” sitting in the meeting, O’Donnell sneered, “Someone said that he looked like the Elf on the Shelf sitting there.”

Where did this line come from? O’Donnell credited it to “someone.” But more likely is the liberal Huffington Post which ran a story on the mocking responses from Twitter to the meeting.

Reporter Weijia Jiang described the public White House fight as a “sneak peek in what may be coming in the new year with a Democratic controlled House dividing Congress.”

JOHN DICKERSON: President Trump startled some lawmakers when he invited the top to two Democrats in office and told them he would shut down the government if he doesn't get funding for his promised border wall. The President allowed cameras to capture a 17-minute argument with Senator Chuck Schumer and Congresswoman Nancy Pelosi.

NANCY PELOSI: We came in here in good faith and we're entering into this kind of a discussion in the public view.

DONALD TRUMP: But it's not — 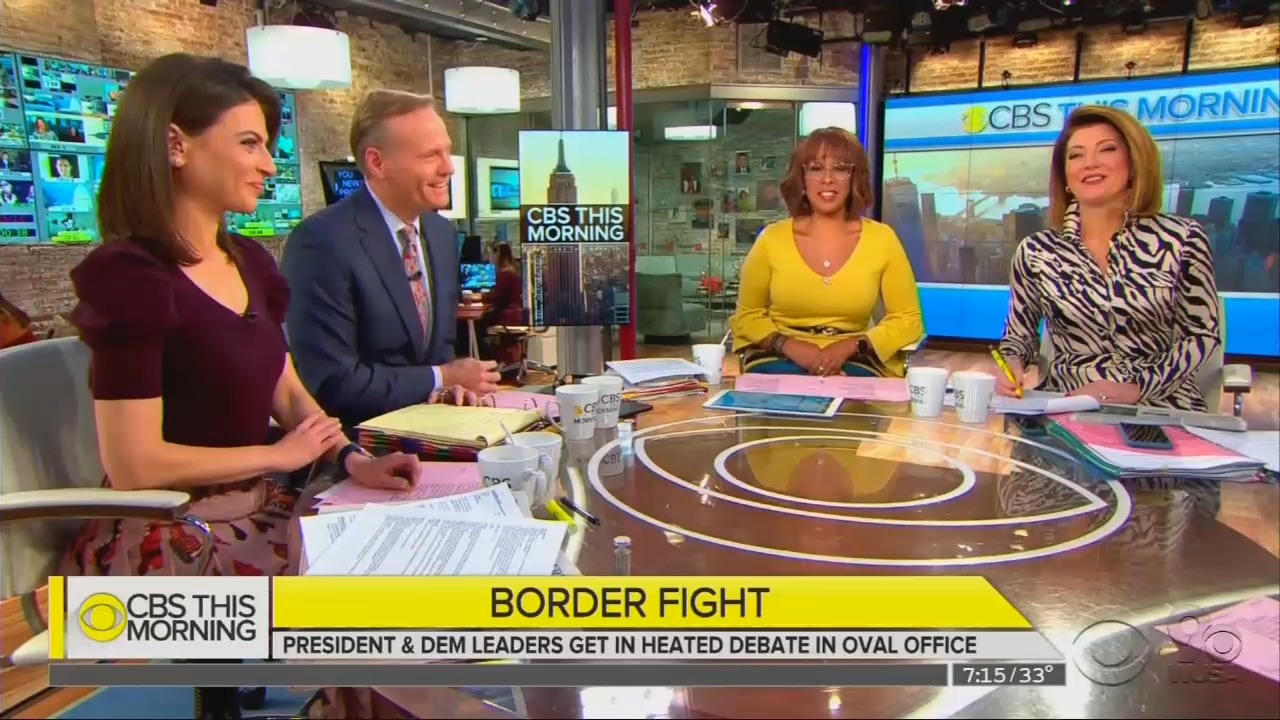 JOHN DICKERSON: Weija Jiang is at the White House, the scene of the fracas. Weijia, Good morning.

WEIJIA JIANG: Good morning. The dramatic display diverted attention away from President Trump's frantic search for a new chief of staff and his potential legal troubles. But it gave us a sneak peek in what may be coming in the new year with a Democratic controlled House dividing Congress.

TRUMP: I am proud to shut down the government for border security, Chuck. So I will take the mantle. I will be the one to shut it down.

JIANG: The President made clear to Democratic leaders Shuck Schumer and Nancy Pelosi he is not budging on his mission to get funding for the wall in his spending bill. Mr. Trump wants $5 billion to build the wall, but they are urging him to support legislation that offers 1.3 billion for fencing and other security measures.

SCHUMER: The experts say you can do border security without a wall, which is wasteful and doesn't solve the problem.

TRUMP: It totally solves the problem. And it's very important.

PELOSI: This is spiraling downward.

JIANG: After the showdown, President Trump stood by his offer to own a partial shutdown and downplayed the wild exchange.

TRUMP: Believe it or not, I think it was a very friendly meeting.

JIANG: The Democrats had a different take.

SCHUMER: This Trump shutdown, this temper tantrum that he seems to throw will not get him his wall and it will hurt a lot of people.

JIANG: In a private meeting back on capitol hill, Pelosi told colleagues “It goes to show you, you get in a tinkle contest with a skunk, you get tinkle all over you. And “It's like a manhood thing, as if manhood could ever be associated with him. This wall thing.” If Congress does not make a deal by December 21st, about a fourth of the government will close. Senate Majority Leader Mitch McConnell.

MCCONNELL: Magic things happen at Christmas and that's what I'm counting on.

JIANG: Schumer and Pelosi offered two alternatives to keep the government open with short term funding. Pelosi, who is posed to be House Speaker, said President Trump called her after the meeting. But did not say if he’s ready to compromise on cash for his wall. Norah, if the government does shut down, it would be for the second time this year.

O’DONNELL: All right, Weija, thank you.

DICKERSON: You know, it looks like they can’t do the basic thing, which is keep the lights on. But there is a little bit of news for people who think that the government is completely without capability. There is a farm bill and another bill that's going through the Senate and criminal justice reform, which are proceeding with bipartisan support. So the whole thing hasn’t broken down.

O’DONNELL: And just a reminder, the President controls —  and his party controls —  Congress, it's all Republican-controlled at this current point.

DICKERSON: Right. They could solve this shutdown thing pretty quickly.

GAYLE KING: I don’t know how that public conversation was good for anybody to see on either side. I felt very uncomfortable watching it.

DICKERSON: So did Mike Pence.

O’DONNELL: Someone said that he looked like the Elf on the Shelf sitting there.