CBS This Morning on Thursday fawned over the woman who would be one of the first Muslim women elected to Congress. But while journalist Reena Ninan hailed what could be a “Muslim wave” headed to Congress, she completely skipped the anti-Israel views of congressional candidate Rashida Talib.

Sounding more like a press release than a journalist, Ninan enthused, “[Talib] tells me she's looking to change history at a time when most people think it just isn’t impossible.” The reporter parroted, “While many have focused on her faith, she says this moment is so much more.” Candidates say a lot of things about themselves. How about asking a tough question? That didn’t happen.

Recounting Talib winning the nomination, Ninan hyped, “What was the moment where it hit you?” She then asked, “Do you believe a Muslim wave is coming to Congress?” 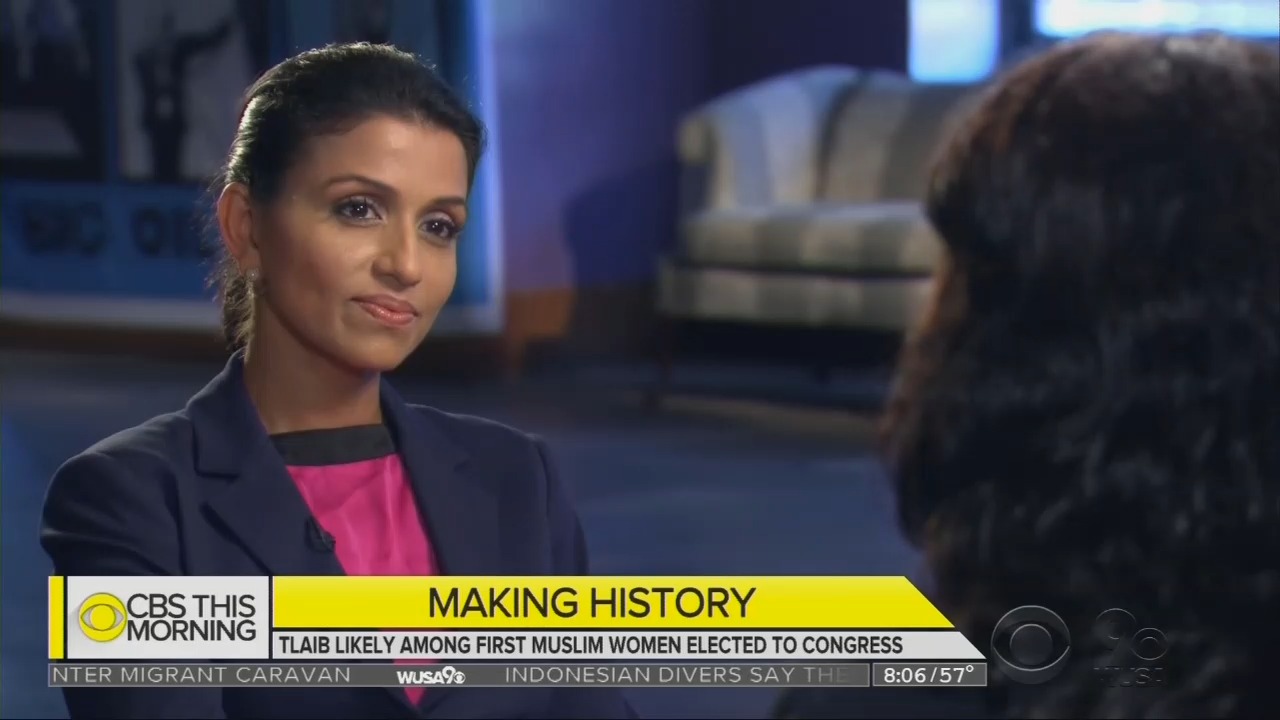 Never mentioned by Ninan is Talib’s anti-Israel views. The Democrat on August 16, 2018 said of cutting funding to America’s ally: “Absolutely, if it has something to do with inequality and not access to people having justice.” She added: “I will be using my position in Congress so that no country, not one, should be able to get aid from the U.S. when they still promote that kind of injustice.”

After closely consulting with Rashida Tlaib’s campaign to clarify her most current views on various aspects of the Israeli-Palestinian conflict, we have come to the unfortunate conclusion that a significant divergence in perspectives requires JStreetPAC to withdraw our endorsement of her candidacy.

JStreetPAC was created to demonstrate the wellspring of political support that exists for candidates who take pro-Israel, pro-peace positions, including support for a two-state solution to the Israeli-Palestinian conflict. While we have long championed the value of a wide range of voices in discussion of the conflict and related issues, we cannot endorse candidates who conclude that they can no longer publicly express unequivocal support for a two-state solution and other core principles to which our organization is dedicated.

Wouldn’t this have been something to press Talib on? It didn’t come up in the CBS segment. How friendly was the interview? Talib thanked Ninan for the interview on Twitter, saying, “See you in Washington!”

Both Ninan and King vaguely alluded to another Muslim American woman running for Congress. But they didn’t mention Ilhan Omar by name. Perhaps that’s because she has tweeted things like this: “Israel has hypnotized the world, may Allah awaken the people and help them see the evil doings of Israel. #Gaza  #Palestine #Israel.”

However, if CBS journalists interviewed Omar, who knows if that would even come up? After all, why speak truth to power? That's only for Republicans.

GAYLE KING: Next week's election could be historic for women seeking office and voters could send the first female Muslims to congress. That includes Michigan's Rashida Talib, the Democrat is running in Michigan's 13th district house race. Reena Ninan of our streaming network, that’s CBSN to discuss what this means for her and Muslim Americans around the country. Reena, Good morning.

REENA NINAN: Good morning to you Gayle. Rashida Talib is now facing a last-minute write in challenge from the woman that she defeated in August. But the momentum is still with her campaign. She's an attorney, a former state legislator, the oldest of 14, and also the daughter of Palestinian immigrants. She tells me she's looking to change history at a time when most people think it just isn’t impossible.

RASHIDA TALIB: The first thing I think about when somebody says you're going to be the first Muslim is celebrate this moment. We changed the course of history at a time we thought it was impossible. And that if you just believe, believe in the possibility of someone like me. This is —  [starts crying]

NINAN: While many have focused on her faith, she says this moment is so much more.

TALIB: For it to happen in a moment where we really have felt this moment of darkness, at a moment where Islamaphobia is such a high rate. You don't have to read the Koran to love me. Love the actions, love the things that I do. Look at those and that will help people get beyond whatever fear or stereotypical thing that they might be thinking about. [Cut to Talib giving speech.] I will uplift you in so many ways.

NINAN: Talib won her Democratic primary in August and is running in the 13th congressional district. If she wins next week, she'll be one of the first Muslim women in Congress. What was the moment where it hit you?

TALIB: I don't think it's hit me yet. I think people don't realize just how much of a roller coaster it is. It’s happy chaos right now is what I describe it as.

NINAN: Do you believe a Muslim wave is coming to Congress?

NINAN: Talib joins the hundreds of women running for office this year, and like many of these candidates, she's also a mom. Talib was born in the mid-70s in Detroit to Palestinian immigrant parents. Her mom Fatma says she always believed her daughter would live the American dream.

NINAN: How does it feel to have your daughter be the next woman congresswoman?

TALIB: She thanks God for it. I'm the girl from southwest Detroit that didn't speak English when I started in school. I was my mother's translator until I was 12 years old. I remember how people looked at her and how things happened to my family as we were getting situated and buying our first home in southwest Detroit. Watching my mother learn how to drive for the first time. All of those experiences come with me.

NINAN: And the cause close toast to her heart, immigration reform. Your eyes well up when you talk about immigration. Why?

TALIB: Yes. I went to a prominently African American school. I didn't understand our immigration system. I knew my parents immigrated here. I think growing up in the community where your neighbors are impacted directly is hard. And talking about walls and separation and detaining children, I think that immigration system, we have demonized it.

NINAN: Do you feel that the Democratic Party is transforming into some different?

TALIB: I think everybody transforms, right? Organically. I think it’s a new time. It’s the new era of the civil rights movement. It's time for a change.

NINAN: Well, Talib won Michigan's 13th district primary. It’s roughly 60 percent African American. She says it's all about issues and she hopes to secure a $15 minimum wage. Plans to push for equal pay, and health care for all. And, of course, she's hoping to overturn the travel ban which impacts several Muslim countries.

NINAN: Perspective. And she’s part of working class Americans who are coming into Congress. And she really believes these are issues that haven’t been tackled before as aggressively. And it really effects her 14 brothers and sisters.