CBS This Morning on Tuesday continued the effort to link Donald Trump to the appalling murder of Jews worshiping at a synagogue on Saturday.  Co-host Norah O’Donnell talked to Jim VandeHei of Axios and demanded to know if he grilled the President in an interview: “I wondered if you got any sort of opportunity to challenge the President on some of the rhetoric that he's used, specifically using the word ‘invader,’ which is also a word that the Pittsburgh shooter used.”

Of course, James Hodgkinson, the man who in 2017 attempted the mass slaughter of Republican Congressmen, was a campaign volunteer for Bernie Sanders. His favorite TV show was Rachel Maddow and he posted things like this online: “Trump has destroyed our democracy. It's time to destroy Trump & co.” Those words are very similar to ones said by Democrats and liberals in the media.

But liberal journalists didn’t hammer the left on culpability for the attempted murder of Republicans.

Axios CEO VandeHei recounted his interview with the President and marveled at how Trump seems to actually believe the things he says on immigration. VandeHei then insisted that the President gets confused from watching Fox News all day:

I think even on that one, he legitimately fears illegal immigrants coming in through this caravan. He watches Fox News. Fox News plays it over and over. They kind of play off of each other. They get each other riled up. And then what seems like propaganda or seems like politics becomes reality in the minds of a lot of voters.

VandeHei expressed his amazement on the things Trump actually believes. He marveled, “I walked away from the interview, he honestly believes that he has no responsibility to calm things down, to cool the country. And, in fact, he argues the opposite.”

The Axios interview will air on Saturday on HBO.

GAYLE KING: President Trump is considering a radical change to American immigration law just ahead of the midterm elections. In an interview with Axios website, the President said he wants to end birthright citizenship, which is guaranteed under the 14th Amendment to the Constitution.

JOHN DICKERSON: According to Politifact, 33 countries offer birthright citizenship. Jim VandeHei, CEO and co-founder of Axios was part of the interview with the President for the upcoming Axios on HBO. He's with us from Washington. Jim, good morning.

JIM VANDEHEI: How are you?

DICKERSON: I'm doing okay. So there’s an election a week away and the President is talking about this before the election. Is this a serious policy proposal by the President, or is this something he wants to get a constitutional debate about for a week on a topic he thinks works for him politically?

VANDEHEI: I think it's something he wants to do. He clearly was surprised that Swann's reporting figured out he had been talking to White House counsel about this. I think politically he wants to keep all of the emphasis on sending troops to the border to guard against this caravan that's   probably several months away from hitting our border. So this one he's been talking to, he says, legal scholars internally. They say that he can get away with it. We have a 14th Amendment which basically states clearly that if you're born here on U.S. Soil are you a U.S. citizen. And he says, “I don't each need to go congress to change this. I can use my executive power to do it.”

I think it's a pretty legally dubious claim. But he says, no, I've got people that say I can. And by the way, he has stacked the courts with a lot of conservatives. I think some of his confidence might come from that. The thing with Trump you never know, is this an idea that's been floating around in his head and he'll actually act on it at some point? I would say when it comes to immigration, he does feel — he believes this stuff even when everyone says you can't do that, you shouldn't do that. No other president would do that. He still does it. 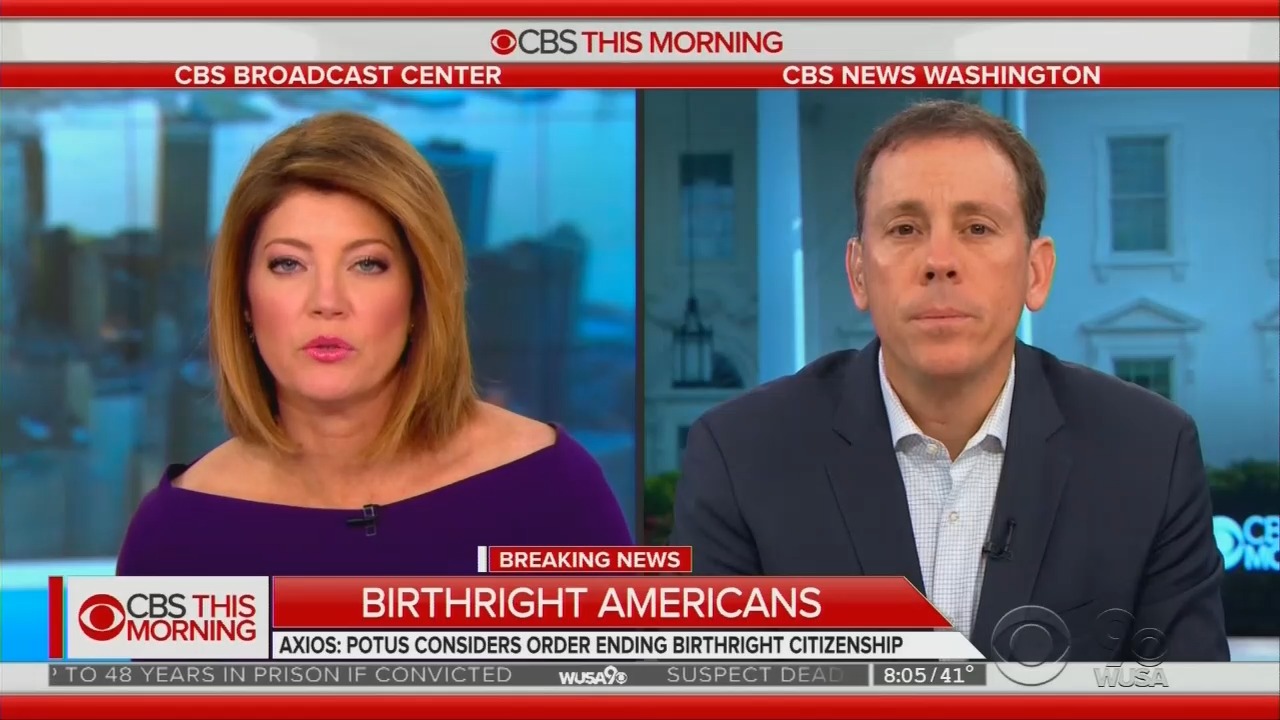 NORAH O’DONNELL: Jim, we looked. And actually in August, 2015, when the President rolled out his immigration policy, in fact, he said he would do that. He wanted to end birthright citizenship. This has been part of his plan on immigration from the beginning. Arguably it was all there for voter to see at the time. To John's point, if it's been part of his plan the whole time, why is he bringing it up one week before the election? He hasn't been able to do it.

VANDEHEI: Yeah. We reported before the interview for the HBO show that we're doing on Sunday. We heard that he talked to White House counsel about this. I don't think they had planned on springing it before the election. I do think they want to do a ton on immigration. I do think that they want to send a bunch of troops to the border. I mean, think about it -- we're sending 5,000 troops to the border. We already have 2,000 National Guard.

We already have border control. We already have walls and fences and electronic devices. And yet he's fearful about a caravan that looks like it's a month or two away. By the time it -- a month or two away. By the time it hits the border it could be 20 people. It could be a couple hundred. And politically I think he thinks it's a winner. And by the way, I think even on that one, he legitimately fears illegal immigrants coming in through this caravan. He watches Fox News. Fox News plays it over and over. They kind of play off of each other. They get each other riled up. And then what seems like propaganda or seems like politics becomes reality in the minds of a lot of voters. 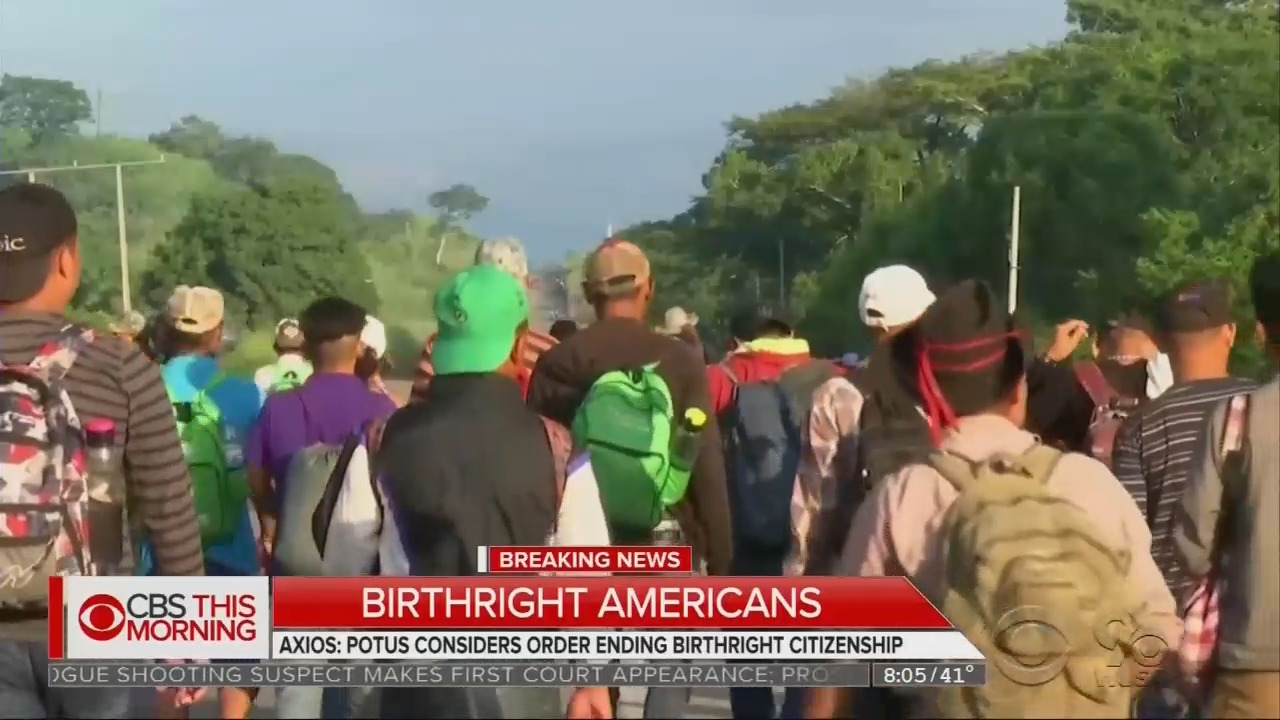 O’DONNELL: Did you get the opportunity —  what was the length of the -- I wondered if you got to any sort of opportunity to challenge the president on some of the rhetoric that he's used, specifically using the word "Invader," which is also a word that the Pittsburgh shooter used.

VANDEHEI: Yeah. We had —  we'll probably air the clip over the weekend —  had a very, very, very tense exchange about that very topic with the President. It was interesting -- not to over-share on it. Like it's almost a more confrontational you got on the language he uses, the more at ease he is. It’s like he wants confrontation. He honestly believes —  I walked away from the interview, he honestly believes that he has no responsibility to calm things down, to cool the country. And, in fact, he argues the opposite.  He feels he has a responsibility to his people. He always uses the term “To my people,” to turn things up. Because he feels like he’s at war with the media despite winning the presidency, despite having the same favorable ratings he had two years ago, he feels at war.

BIANNA GOLODRYGA: He's at ease as the country is on edge. Thank you.