CBS Gushes Over Biden as ‘Top Choice’ for 2020: You ‘Care Deeply About This Country’

Despite almost nine minutes of interview time, CBS This Morning co-host Norah O’Donnell on Thursday posed no tough questions to Joe Biden. Instead, she cheered the Democrat on as the “top choice” for Democrats in 2020 and praised him for “caring deeply about this country.” Pushing the former Vice President from the left, O’Donnell demanded, “If Democrats win the House, do you believe that they may move forward with articles of impeachment?”

Even by the standards of liberal softball interviews, this one was particularly easy. At one point, O’Donnell offered this  query: “You've been out on the road a lot campaigning for Democrats. I know you said our democracy is under assault. What's at stake here?”

Regarding 2020, the co-host seemed to actively push the Democrat into a run:

NORAH O'DONNELL: You are the Democrats top choice to run against President Trump in 2020.

JOE BIDEN: This is so early, I don't think that means anything.

O'DONNELL: I know. But you think about it. You care deeply about this country. I know you do. That's why you're out campaigning. 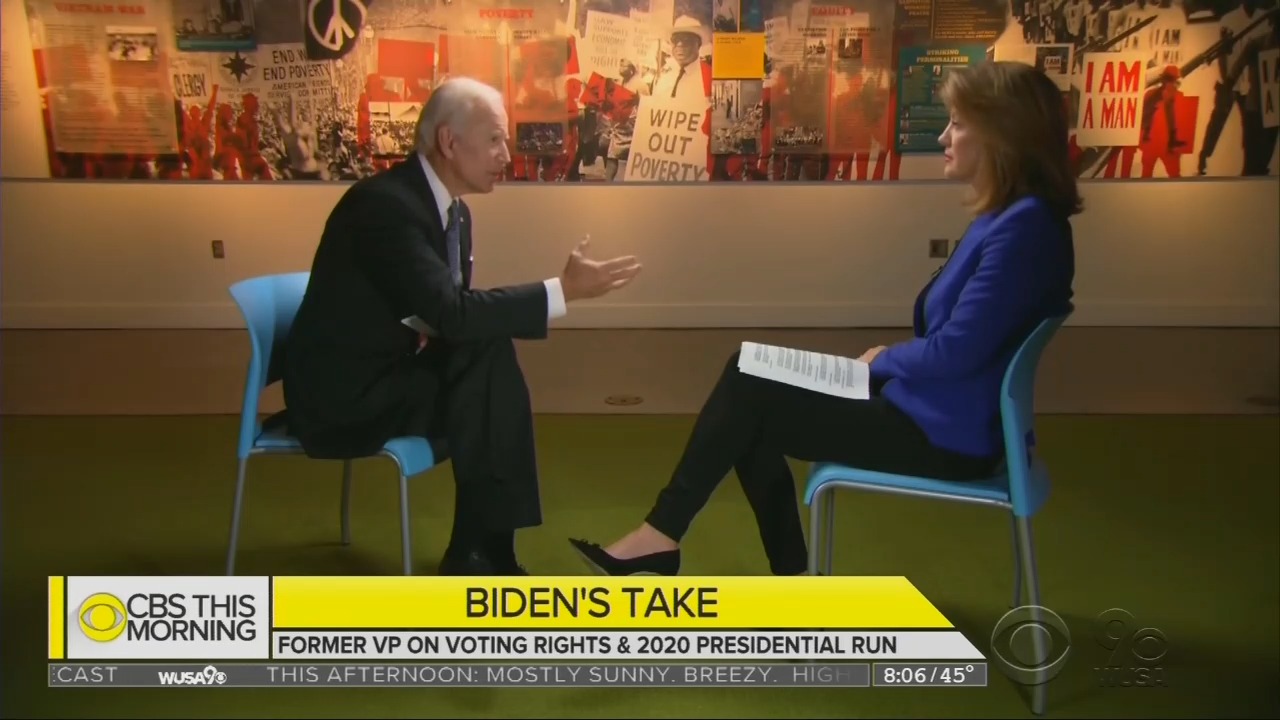 After Biden suggested that Donald Trump has a “love affair with dictators,” co-host Bianna Golodryga couldn’t contain herself: “Wow! He really did not hold back, even suggesting this President coddles dictators.”

The interview ran 8 minutes and 57 seconds over two segments. The only question that even hinted at being tough is this one: “Is age a legitimate issue?” And O’Donnell had no follow-up when Biden talked about being “vigorous.”

She never pointed out his contradictions. For instance, at one point, the former Vice President described Trump’s philosophy as this: “I have a problem and it’s because of that immigrant or that black guy.”  During the same interview, Biden touted civility, insisting, “I don't want to get down in the mosh pit with these guys. It's not a place I want to play.”

Well, which is it? Civility or calling your opponent a bigot? O'Donnell certainly didn’t mention Biden’s 2012 campaign pitch to African Americans, saying that Mitt Romney would “put y’all back in chains.”

NORAH O’DONNELL: Former Vice President Joe Biden says President Trump is being much too lenient with Saudi Arabia in the wake of Jamal Khashoggi’s disappearance. We spoke with the Delaware Democrat at the National Civil Rights Museum in Memphis, Tennessee, where he was- honored last night with a Freedom Award. Do you have doubts about the leadership of the Crown Prince Mohammad Bin Salman?

JOE BIDEN: I do and I have and I think they’ve been confirmed.

O’DONNELL: What doubts did you have?

BIDEN: I'm very worried that the President seems to have a love affair with autocrats.

O’DONNELL: If the allegations are true and that the Crown Prince of Saudi Arabia ordered the killing of this Saudi dissident who wrote a column for the Washington Post, should there be consequences?

O’DONNELL: Why do you think President Trump does that? [Responding to Biden’s instance that Trump coddles dictators.]

O’DONNELL: There are also reports that Special Counsel Robert Mueller is getting closer to concluding and issuing findings in a major portion of the Russia investigation and that includes judgment on two of the most explosive aspects of the inquiry, whether there was clear incidents of collusion between President Trump and Donald Trump’s 2016 campaign and whether the President took any actions that amount to obstruction of justice. So, we talked to the Vice President about that was well.  Let me ask you about the Mueller investigation, the special counsel into influence in the 2016 election. Do you believe that report should be issued before the midterms?

BIDEN: I think it should be issued when he this finish the investigation. I’ve been around a long time. You wait until the investigation is finished. You don't put an arbitrary end to it. You wait till it's finished and let's see what it has to say.

O’DONNELL: And if Democrats win the House, do you believe that they may move forward with articles of impeachment?

BIDEN: I hope they don't. I don't think there's a basis for doing that right now. I think we should wait until the report comes out.

O’DONNELL: In our next hour he talks about voting rights and why thinks our democracy is under assault and how he will decide whether to run for the presidential election in the 2020 election.

BIANNA GOLODRYGA: Wow! He really did not hold back, even suggesting this President coddles dictators.

O’DONNELL: The former Democratic senator joined a list of honorees that include Nelson Mandela, Bernice King, and John Lewis. We spoke about with Biden at the National Civil Rights Museum in Memphis about a range of issues, including the dispute over voting in Georgia's election. In Georgia, a group of senior citizens loaded up a bus to vote early. They were told to get off that bus. Do you believe that voter suppression is under way?

O’DONNELL: In Georgia, it's report the more than 53,000 voter registration applications are on hold.

BIDEN: That's right. And 70 percent  of those are African Americans. Surprise, surprise.

O’DONNELL: So, do you believe there's an effort underway to suppress the minority vote.

O’DONNELL: You've been out on the road a lot campaigning for Democrats. I know you said our democracy is under assault. What's at stake here?

BIDEN: I think our basic American values are at stake. Decency, honor, giving hate no safe harbor, telling the truth, understanding it's something bigger than you.

O’DONNELL: As we walked past the Lorraine motel where Martin Luther King Jr was assassinated in 1968, Biden says a lot has changed since then and he remains optimistic about the future of America.

TRUMP: We have the dumbest immigration laws in the world. The world laughs at us.

O’DONNELL: What about civility in politics? We remember when Michelle Obama at the convention said when they go low we go high.

O’DONNELL: But the Attorney General Eric Holder who may be considering a run for 2020 said when they go low we kick them.

BIDEN: Well, you know, that's —  I respect the attorney general, but that's not my view. I don't want to get down in the mosh pit with these guys. It's not a place I want to play.

O’DONNELL: You are the Democrats top choice to run against President Trump in 2020.

BIDEN: This is so early, I don't think that means anything.

O’DONNELL: I know. But you think about it. You care deeply about this country. I know you do. That's why you're out campaigning.

BIDEN: Is age a legitimate issue?

O’DONNELL: President Trump says you'd be his dream to run against.

BIDEN: Well, I tell you what —  well, I shouldn't say anything.

BIDEN: No, no, no. Age has given me some wisdom.

O’DONNELL: That's the first time Joe Biden has ever edited himself. And that's not a criticism, it just is.

JOHN DICKERSON: He must be running if he's showing restraint.

GAYLE KING: But it also shows what your mom used to say if you don't have anything nice to say, don't say anything at all. Because he was clearly going to say something and thought, “Nah. Better not.”