Betomania! MSNBC Hails ‘Rock Star’ Who Could Be 2020 Nominee No Matter What! 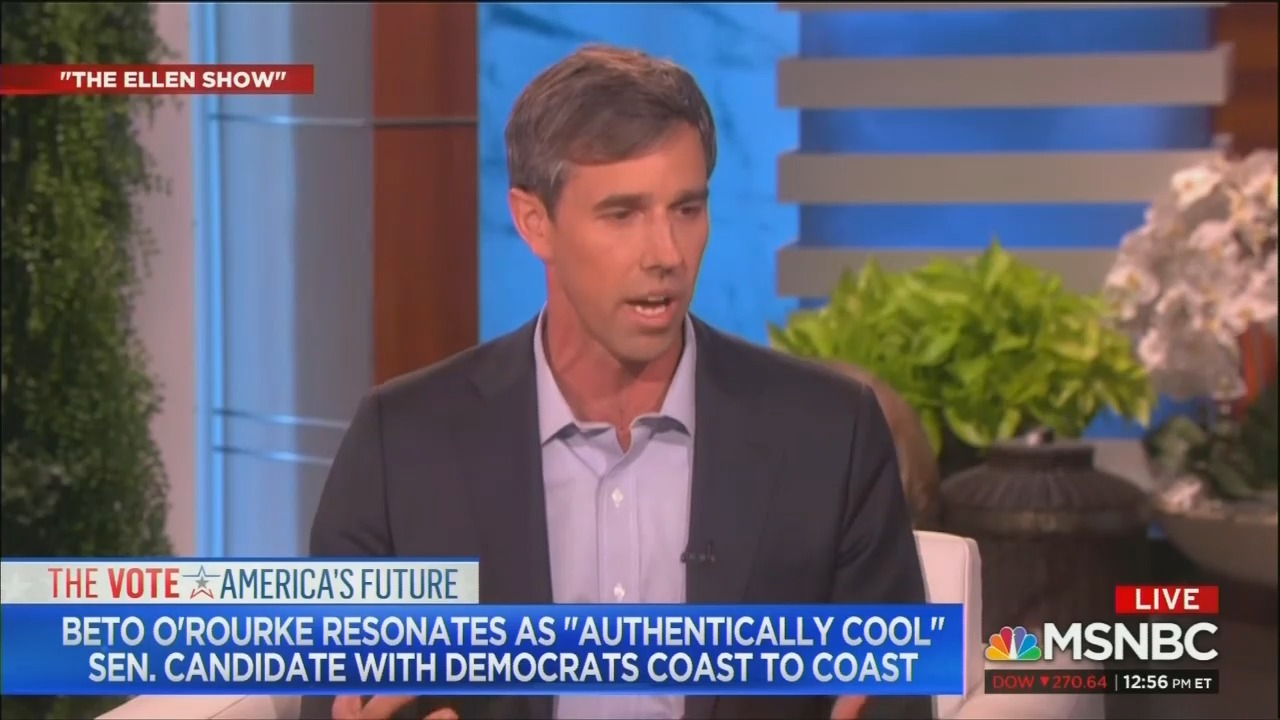 The journalistic swooning for Beto O’Rouke reached epic proportions on Thursday as MSNBC reporters gushed over the “rock star” and the “Betomania” phenomena that surrounds him. But, by far, the most hyperbolic moment came when Andrea Mitchell Reports guest host Peter Alexander insisted that the Texas Democrat might be the 2020 nominee — no matter what!

He raved, “A lot of people think this guy's name, if he wins, they think he's the nominee. If he loses, he may be the Democratic nominee.” This is the way the media treats O’Rourke. Either way, he’s a star! Keep in mind, the candidate is currently trailing by seven points and has NEVER led Ted Cruz in a Real Clear Politics poll.

Alexander and Seitz-Wald seemed to understand this a bit. Speaking about Beto 2020, Seitz-Watz admitted, “I think it's a sign that so many people are excited about this guy who all the polls say is about to lose.” By people, he means journalists.

Still, this didn’t stop the excitement. Alexander referenced other liberals touting the Democrat as the second coming of Barack Obama: “I heard from someone close to former President Obama say this could be BO 2, Barack Obama 2 in some way.”

Occasionally, reality would intrude as Alexander remembered just who will be voting in this Texas election: “This guy is a hero in L.A., New York, in a lot of liberal parts of the country. But those people don't vote in Texas. What do the people in Texas say?” 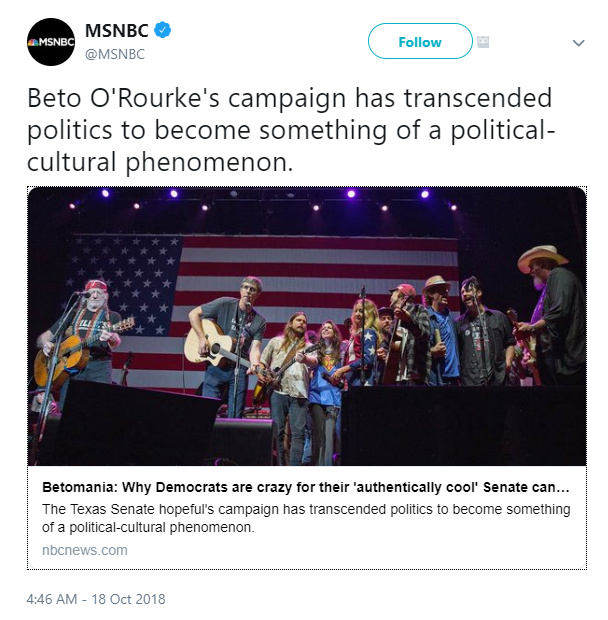 In the article, Seitz-Walt bubbled like an excited fan: “The Texas Senate hopeful's campaign has transcended politics to become something of a political-cultural phenomenon.” Again, no what happens, the liberal media loves Beto.

A transcript is below. Click “expand” to see more.

PETER ALEXANDER: Coming up, here: Betomania! Rock star receptions for a Texas Senate candidate. But does that translate into votes?

ALEXANDER: In Texas' heated Senate race, Republican incumbent Ted Cruz and his democratic challenger, three-term congressman Beto O'Rourke, made their final pitch to voters this week. It's been 30 years since Texas elected a Democrat to the Senate but O'Rourke, a rising progressive star, is getting plenty of attention well beyond Texas.

ALEXANDER: There he is with Ellen DeGeneres. NBC’s Alex Seitz-Wald got a firsthand look at Betomania. That clip is sort of a perfect way to encapsulate this, right? This guy is a hero in L.A., New York, in a lot of liberal parts of the country. But those people don’t vote in Texas. What do the people in Texas say? 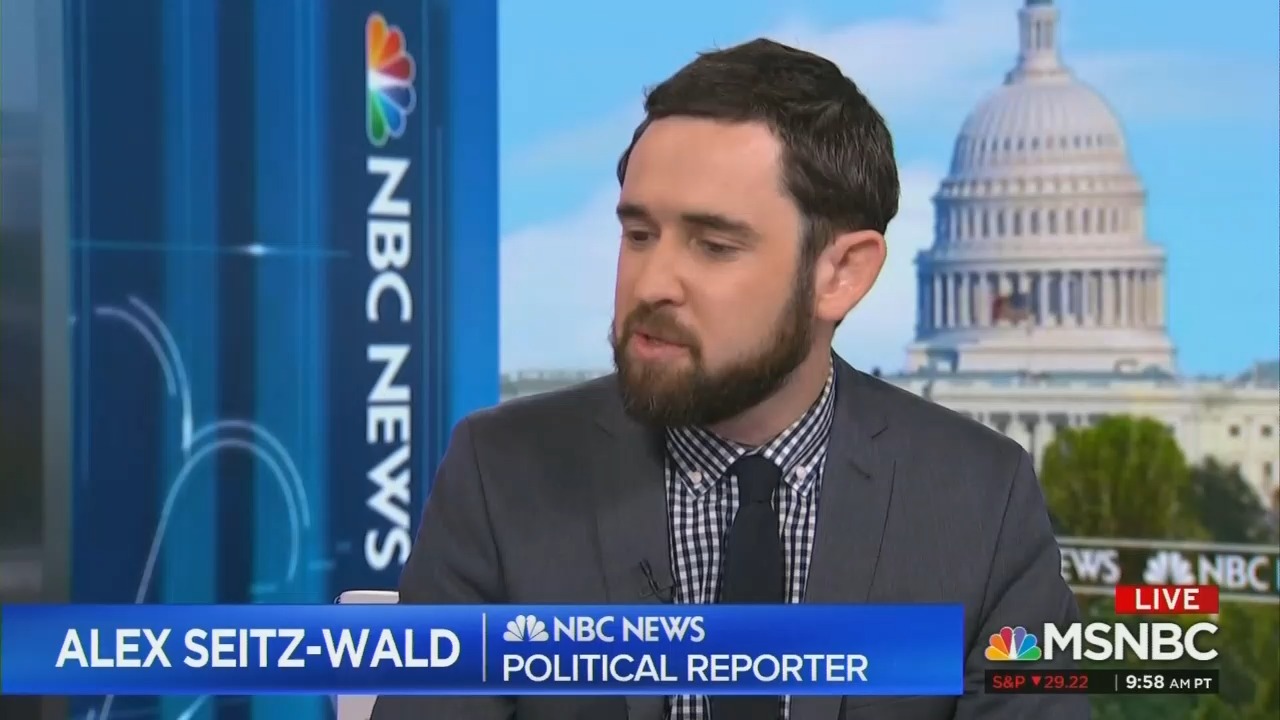 ALEX SEITZ-WALD: Right. Well, there's definitely a lot of enthusiasm for him on the ground in Texas. 50,000 people turning out for him in Austin. I was with him on a Monday and he Is going to a rally in the morning with 1,000 people. Rally in the afternoon with 1000 people. And then that evening, a big concert with rappers. But still, you know, this is Texas. 500,000 more Republicans voted in the primary earlier this year than Democrats. He's got a lot going against him. He’s got to kind of pull an inside straight to win this race. Even as there's this alternative national world going on, with all these liberals, you know, putting Beto stickers on their cars in Vermont and New York. Want him to run for president in 2020. He’s got to win in Texas first.

ALEXANDER: I heard from someone close to former President Obama say this could be BO 2, Barack Obama 2 in some way. That may not necessarily help him because he’s going to need some other things to go his way right now. We saw in recent days, his numbers seem to trail off. Maybe in the wake of the Kavanaugh controversy where Republicans came back home so to speak. How are they combating that right now?

SEITZ-WALD: This has been the big problem for any Democrat in Texas. From day one with Beto O’Rourke, there was a sense there was a ceiling, that he could climb and climb and no matter how big his crowds were, no matter how big his enthusiasm, he was never going to get to 50 percent, just because it’s Texas. Large Latino population, but it hasn't been well organized. Democrats haven't invested in getting them to turn out. They’re trying to get enthusiasm, get the word out. And they're basically trying to remake the electorate to win. Because that’s what you got to do to win. It’s a very tall order and you only get to do that once and a while. Everything’s got to go right.

ALEXANDER: He's gone negative in recent days. Usually, that’s an indication you’re trying to get some folks attention because things might not be going well.

SEITZ-WALD: Right, there's been a huge part of his brand that has been positive, sunny, happy warrior. Really took of the gloves in this debate earlier this week with Ted Cruz. Now running three negative ads on TV. Could be a sign of nervousness. It could have been their plan to close negative in the end. But, you know, if you've gone this far staying positive, you would like to avoid going negative if you can.

ALEXANDER: I asked you earlier where he’s going to hold his election night.  You joked Des Moines. A lot of people think this guy's name, if he wins, they think he's the nominee. If he loses, he may be the Democratic nominee. Does he even address that sort of discussion?

SEITZ-WALD: He says he's going to serve his full six-year term if he’s elected. So did a guy named Barack Obama when he was running for Senate. You know, he just kind of has this it factor a lot of Democrats don't have these days. I think it's a sign that so many people are excited about this guy who all the polls say is about to lose when they've got 30 candidates running for president already and they're instead getting excited about this guy. It means they are not, Democrats want to fall in love, they say. They’re not falling in love with the rest of the 2020 field right now.