In the 1990s, George Stephanopoulos was instrumental in undermining the sexual abuse claims against his then-boss, Bill Clinton. Now, he thinks women should be believed. This is quite a change for the now-Good Morning America co-host who talked to Sarah Huckabee Sanders about Brett Kavanaugh.

Stephanopoulos on Tuesday demanded, “Why does he think that Ms. [Deborah] Ramirez and Dr. [Christine Blasey] Ford are lying?” The co-host complained, “He called the accusations false already before they were even heard.”

Asking the same question over and over, the converted believer of women insisted:

The President from the very beginning has been questioning the story of Dr. Ford, including that tweet last week saying that if she were telling the truth she would have reported it to the authorities at the time. 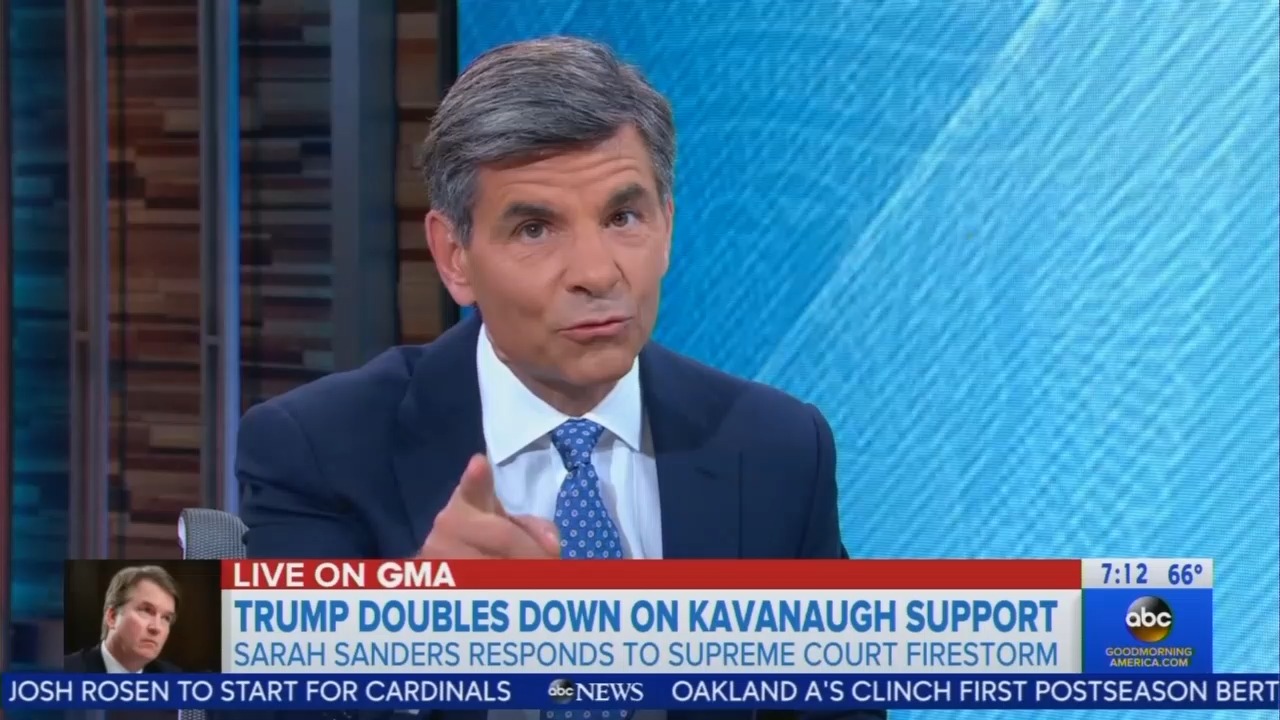 Citing Bill O’Reilly and Roger Ailes, Stephanopoulos lectured, “The President consistently, every single time, takes the side of the man."

Yet, when Stephanopoulos was a Clinton operative, he sided with "the man," Bill Clinton. He tried to discredit Gennifer Flowers, Paula Jones, Connie Hamzy, just to name a few. The New York Times in 2016 recounted the Democratic operative’s role in dismissing claims about Clinton:

George Stephanopoulos, the communications director of the 1992 campaign, recalled in his book, “All Too Human.”

“We have to destroy her story,” she said, according to Mr. Stephanopoulos.

In what became a common tactic, affidavits were collected, from an aide and two others who stated that they were with Mr. Clinton at the hotel and that Ms. Hamzy’s story was false. (Contacted recently, Ms. Hamzy said she stood by her account.)

When the work was done, both Clintons called Mr. Stephanopoulos, together, to offer their thanks.

When women make the brave choice to come forward, they SHOULD be given forums to make their case, tell their stories and be listened to respectfully. Considering Stephanopoulos spent years trying to destroy women who accused his boss, he’s in no position to talk about the subject now.

GEORGE STEPHANOPOULOS: Have to move on to Brett Kavanaugh. The President had that tweet last night railing against false accusations against Mr. Kavanaugh. Why does he think that Ms. Ramirez and Dr. Ford are lying?

SARAH HUCKABEE SANDERS: Certainly, the President has said a number of times that these individuals should be heard and —

STEPHANOPOULOS: He called the accusations false already before they were even heard.

SANDERS: Brett Kavanaugh has been unequivocal in his denial of this. He knows Brett Kavanaugh. He spent a great deal of time with him and he trusts him and Brett Kavanaugh has asked for his voice to be heard in this process too. As last I can remember, we're still a country where you're innocent until guilty except when you're a conservative Republican. It is absolutely shameful what the Democrats have done and the way they've turned this into a complete political process.

SANDERS: Multiple lives have been ruined. Both families have been drug through the mud when they didn't have to be because Dianne Feinstein could have done this in a much more structured process and instead waited until the 11th hour and is playing political games with people's lives and I find that to be disgraceful and disgusting and she certainly needs to shoulder a lot of the blame for what’s going on right now.

STEPHANOPOULOS: The President from the very beginning has been questioning the story of Dr. Ford, including that tweet last week saying that if she were telling the truth she would have reported it to the authorities at the time. That drew a sharp response from Senator Susan Collins.

STEPHANOPOULOS: You've said that everybody's voices should be heard. So does the President want Ms. Ramirez to appear before the Senate Judiciary Committee?

SANDERS: You know, it’s interesting that you say that. It’s a lot of Democrats that like to ignore Keith Ellison and Cory Booker. They love to fight and champion women until they disagree with them.

STEPHANOPOULOS: Al Franken lost his job in the Senate.

SANDERS: And a number of other Democrats should have the same type of scrutiny. Look, —

STEPHANOPOULOS: But what’s the answer to my question? Every single time the President has taken the side against the man against the woman accusers.

SANDERS: That’s not true. And in this case, the President knows Brett Kavanaugh. He’s heard his story. There hasn’t been a shred of evidence to corroborate the other individual stories and there has been a lot of individuals coming forward to talk about the Brett Kavanaugh that they know and they are confident that these things didn’t happen.