CBS This Morning co-host Gayle King was absolutely unhinged on Monday, putting aside any pretense of objectivity as she blasted the Trump administration’s policy of separating the children of illegal immigrants: King excoriated it as a form of “child abuse,” an indication of “zero humanity” and lectured viewers at the start of the show that the “Statue of Liberty weeps” at the action.

King, a Democratic donor as well as co-host, reported live from the southern border. Clearly disgusted, she began: “We went straight to the facility, the location where kids and their parents were reunited. All I can say after talking to the people, watching the people, listening to the people, the Statue of Liberty, I think, is weeping right now.”

Talking to Manuel Padilla Jr., the chief of the Rio Grande valley sector of Customs and Border Protection, King began with this loaded question: “People say that this zero tolerance policy actually means zero humanity. What do you say of that? ” She didn’t identify who the “people” were, but one can assume King meant herself and other CBS journalists. 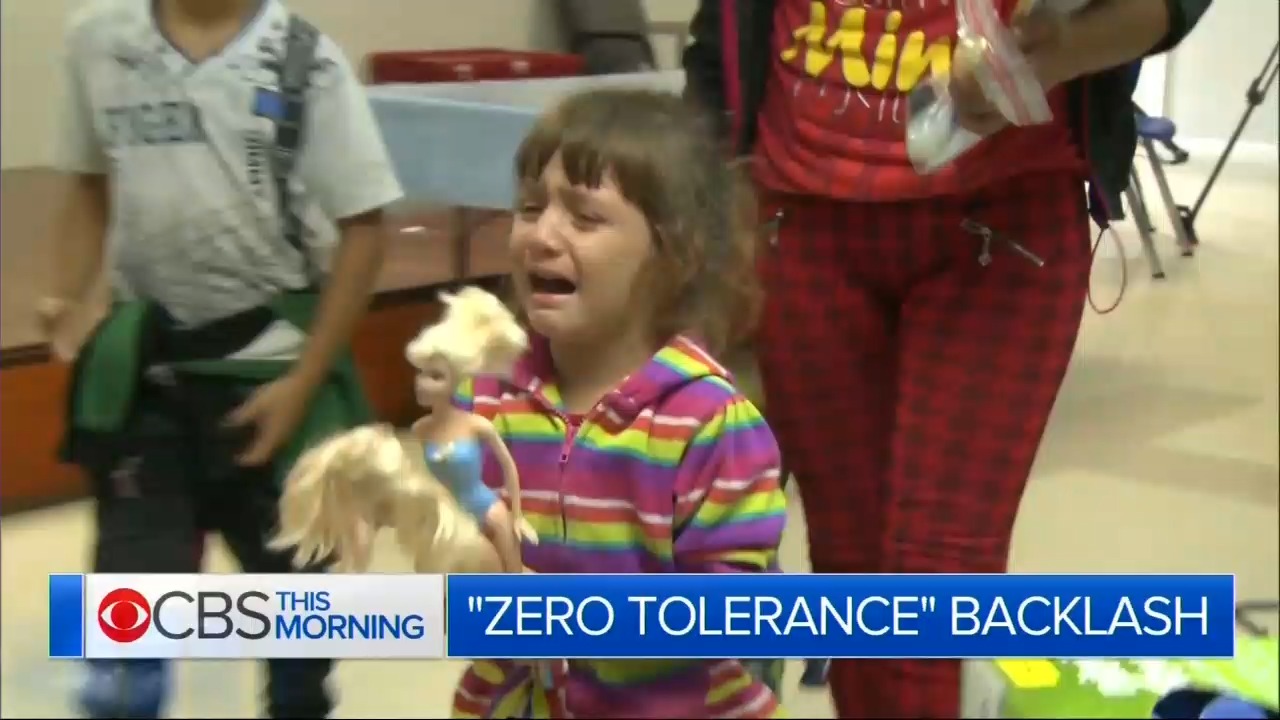 When Padilla pointed out that detaining families began in 2014, King dismissed: “I don’t want to go back to 2014.” She lectured: “What people are talking about is this is cruel and inhuman behavior, is how it’s perceived.” King peppered Padilla, demanding to know if the policy “seems cruel to you.”

In the 7:30 hour, King talked to Colleen Kraft, the President of the American Academy of Pediatrics President. Again, the co-host referred to unidentified “people” who hate the policy:

Yes, the rhetoric is very “heated” because of the type of language King uses. Clearly, this policy is controversial and there are a wide variety of views on it. (Some conservatives oppose it.) But it doesn’t help the situation when CBS decides there is only one opinion and it’s this: “The Statue of Liberty weeps.”

NORAH O’DONNELL: Gayle King is along the U.S./Mexico border this morning. We're going to hear from her in just a moment. As you can see, Alex Wagner joining us here at the table. So we start with this. The battle over the Trump administration’s zero tolerance policy on immigration is intensifying with lawmakers in both parties condemning it as cruel and inhumane. The administration still defends this strategy.

JOHN DICKERSON: Thousands of people protested across Texas yesterday. They accuse the administration of punishing undocumented children by removing them from their parents. The Department of Homeland Security confirms 1,995 children were separated from their parents between April 19 and May 31

ALEX WAGNER: Gayle is in McAllen, Texas leading our team along the southern border. She's been talking with parents recently united with their children. Right now, she's at a border patrol facility where hundreds of migrant families are being detained. Gayle, a lot of interest in this story. What can you tell us? How is the border? 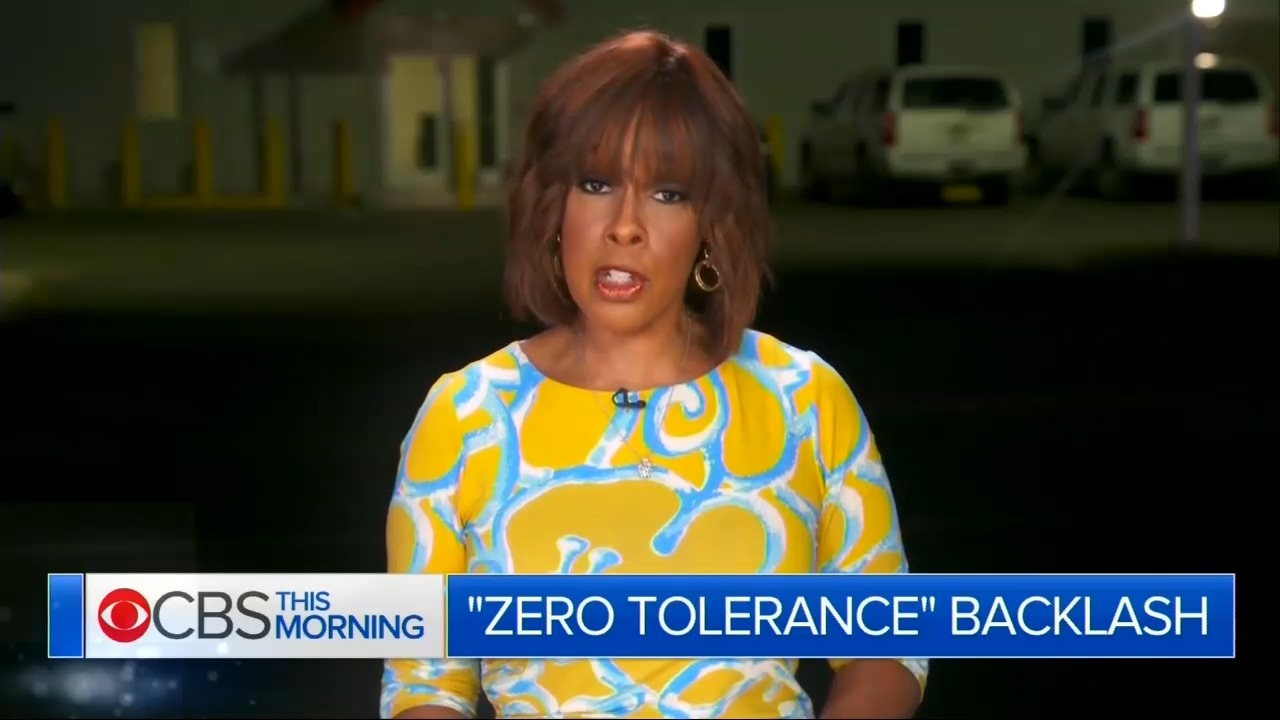 GAYLE KING: I'll say, Alex, we arrived yesterday afternoon. We went straight to the location where kids and their parents were reunited. All I can say after talking to the people, watching the people, listening to the people, the Statue of Liberty is weeping right now. It's unbelievable the stories we've heard and we will share them with you through the course of this two hours. But let’s begin exactly where we are standing right now. We're standing in front of a converted warehouse. This is the first stop for many undocumented families caught at the southern border. It's where federal officials are trying to weed out criminals. An executive officer at the center told us that 55,000 square foot facility can hold up to 1500 people. Listen, this is a very nondescript building. It's not marked and it’s deliberately not marked. Yesterday more than 1,000 people were being processed here. That includes more than500 families and 97 unaccompanied children. David Begnaud was part of a select group of reporters who were allowed to go inside the facility. David joins us now.

DAVID BEGNAUD: Gayle, we saw people in cages. They looked like animal kennels.

BEGNAUD: They looked like kennels that animals would be in.

KING: Manuel Padilla is chief of the Rio Grande valley sector of Customs and Border Protection. He is responsible for the biggest area of illegal crossings and for implementing the policy. He is here now for an interview that you’ll see only on CBS This Morning. Chief Padilla, we thank you very much for joining us. I know you were hearing a lot of the heated conversation. People say that this zero tolerance policy actually means zero humanity. What do you say of that?

[On children being separated from parents.]

KING: Can they recover from the brain? Is this long-lasting trauma to the brain?

DOCTOR COLLEEN KRAFT (American Academy of Pediatrics President): This type of trauma can be long-lasting, and it's difficult to recover from this. We know very young children who are exposed to this trauma go on to not develop their speech, not develop their language, not develop their gross and fine motor skills and wind up with developmental delays.

KRAFT: It is a form of child abuse. And as much as I respect our President and the office of the presidency, I want to turn people's attention to the picture that I saw in the media about a week ago with the President's daughter and grandchild —

KRAFT: —  interacting with each other. Yes. And if you look at the picture, you see the joy between parent and child. You see the child who is responding to their parents. You see that child's brain being built. Every one of our children deserve that same relationship with their parents, that same nurturing.