MSNBC’s Ruhle: Yeah, I Scream Curses at Trump in the Shower

Call it a moment of clarity on MSNBC. Liberal co-host Stephanie Ruhle on Monday acknowledged that perhaps swearing “f**k Trump” on national television might not be the best strategy to persuade middle America. Yet, the 9am hour journalist also informed her viewers that she curses out the President while showering.

Recapping Robert De Niro screaming obscenities at Trump during the Tony Awards, the supposedly objective journalist admitted: “I  understand the frustration and outrage around the President. I'm sure I shout some of those words in the shower.”

However, Ruhle also played a clip of HBO host Bill Maher rooting for a recession. She chided: 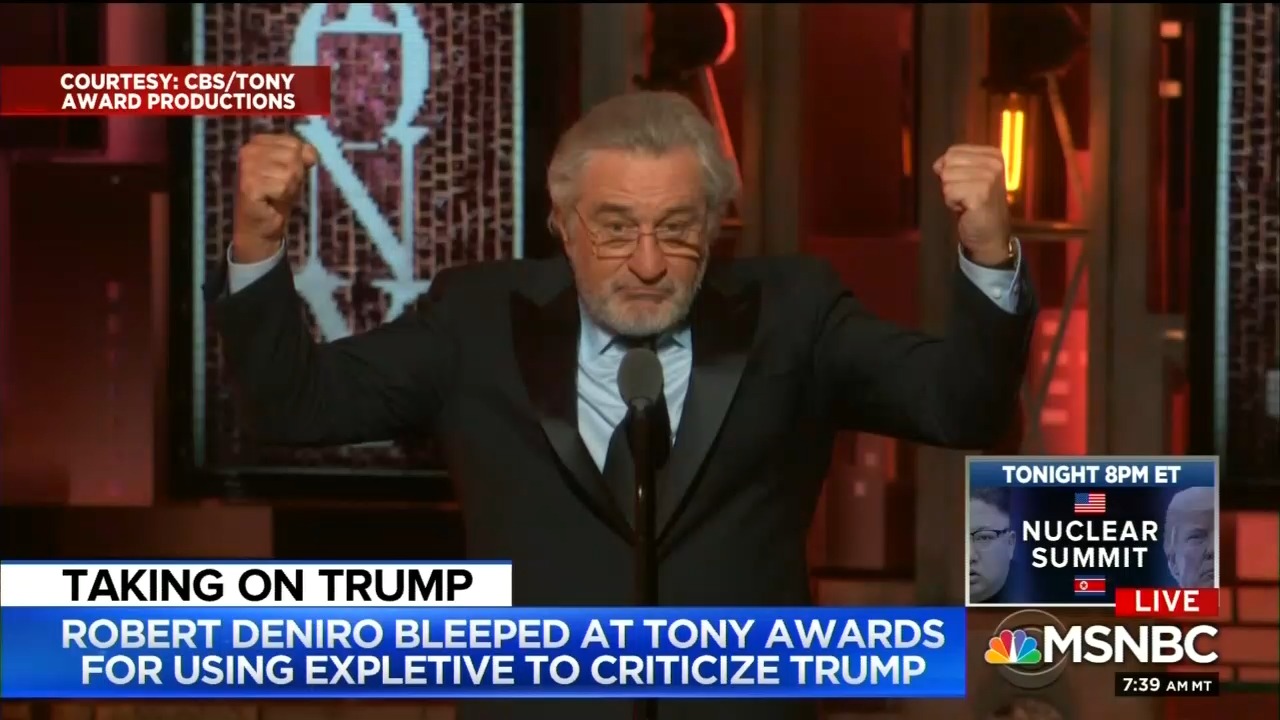 She also worried that media personalities like Maher and De Niro will undermine trust in the media at large:

[This allows Trump supporters to] ignore the media when the media is fact checking the President. When we get up here and we say, “What, he's telling you X, Y and Z about the economy? I'm going to tell you where he's lying to you.” People stop believing what the media tells them when they see media superstars say things like "let the economy fail."

But in the same segment, Ruhle played a clip of Senate Majority Leader Mitch McConnell bragging about conservative judges. Rule blurted: “So when I heard Mitch McConnell say that, I may have used some of those Robert De Niro words.”

Of Christian conservatives and Trump, she trashed: “If he delivers their policy, they'll take the pig.” Perhaps Ruhle is incapable of taking her own advice when it comes to perhaps assisting the President. 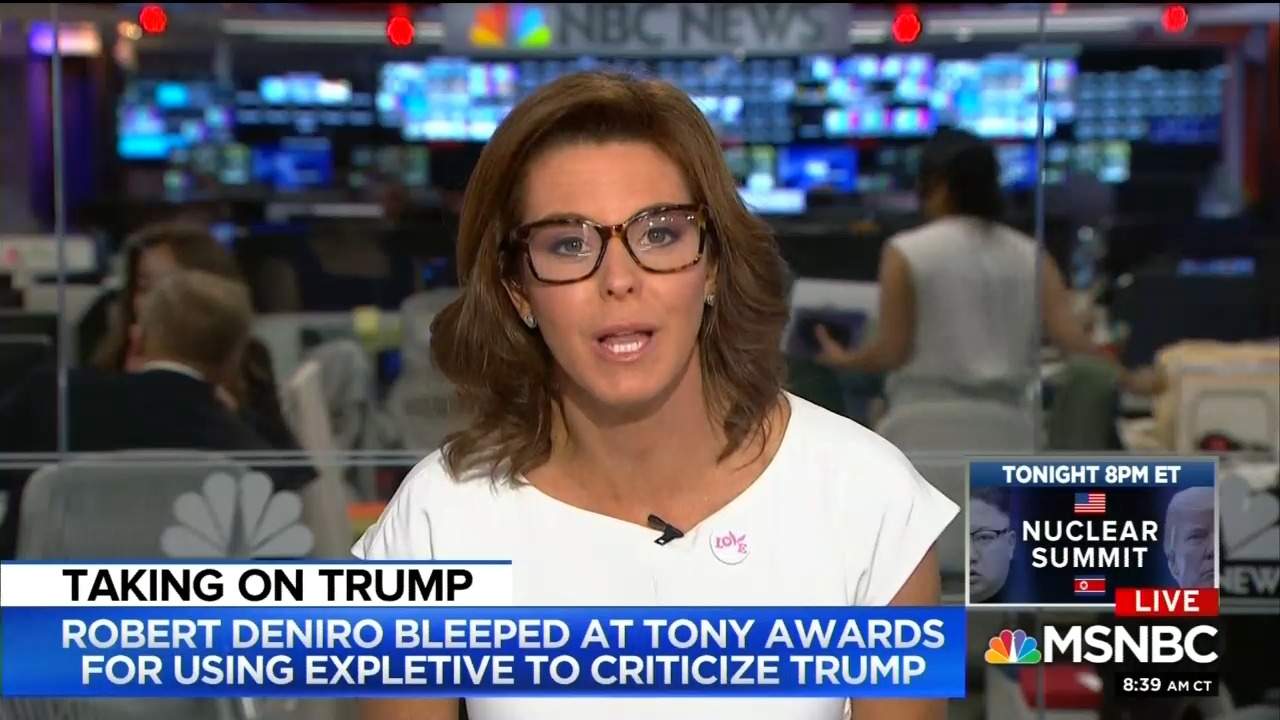 STEPHANIE RUHLE: Now, President Now, president Trump's, their critics have their sights on November. With big hopes of a blue wave sweeping across Congress. But are the tactics some big supporter using helping or hurting the cause? Case in point, actor and super star Robert De Niro last night voicing his frustration and opposition to the President at his Tony awards appearance.

RUHLE: You'll notice his comments were deleted. He dropped the F-bomb saying F-trump twice. A week after late-night host Samantha Bee used an expletive against Ivanka Trump. It's not just crude language, I want to share what Bill Maher suggested on his show last Friday.

BILL MAHER: This economy is going pretty well. I feel like the bottom has to fall out at some point. By the way, I'm hoping for it. Because I think one way you get rid of Trump is a crashing economy. So please, bring on the recession.

RUHLE:  Please bring on the recession is what Bill Maher said. Back with me, Elise Jordan and Mark Thompson. Elise, walk me through this. Because to me, I understand the frustration and outrage around the President. I'm sure I shout some of those words in the shower.

ELISE JORDAN:  Something you hear constantly from people who politically oppose trump is they can't understood why the supporters are sticking with him. That 35 to 45 percent that are, no matter what, they're just staying with Donald Trump. Probably closer to 36 percent. What I've heard, when I've gone around the country talking to voters in over 50 focus groups is that Trump supporters feel like the media and elites are out to get Donald Trump. So this kind of criticism, this kind of just gratuitous nastiness, plays into what they already think. And that's just that everyone is so biased against Donald Trump that they aren't seeing what they see. That he isn't getting a fair shake and isn't getting a chance. It helps further — the supporters retrench and dig deeper into their own belief system.

RUHLE: And ignore the media when the media is fact checking the President. When we get up here and we say, “What, he's telling you X, Y and Z about the economy? I'm going to tell you where he's lying to you.” People stop believing what the media tells them when they see media superstars say things like "Let the economy fail."

MARK THOMPSON: Yeah, well, you know, for bill to say something like that, that's a bit reckless.

RUHLE: My family can't afford for the economy to fail. They could hate the President but they need to support themselves.

THOMPSON: I guess he was being tongue in cheek, but that's a little bit reckless because then the perception is that's something, you know, Democrats are saying or people aligned with Democrat -- I'm not even sure if Bill is a Democrat, I guess he is. But there is still sort of a double standard.

RUHLE: We must share what Mitch McConnell said on Friday.

RUHLE: If he delivers their policy, they’ll take the pig.