“Rising star in the Republican Party.” “Up and coming star in Republican politics.” Once again, the networks are hyping the fall of a GOP politician, making sure to highlight the party status of Missouri Governor Eric Greitens. This is a habit not usually followed when the offending politician is a Democrat.

On CBS This Morning, Norah O’Donnell described Greitens: “He was considered a rising star in the Republican Party. Greitens was hit by scandals stemming from an extramarital affair, alleged blackmail, and claims of campaign finance violations.”

Reporter Adriana Diaz noted “a growing number of calls from fellow Republicans to resign” and that “Missouri Republicans called for Greitens to step down.” 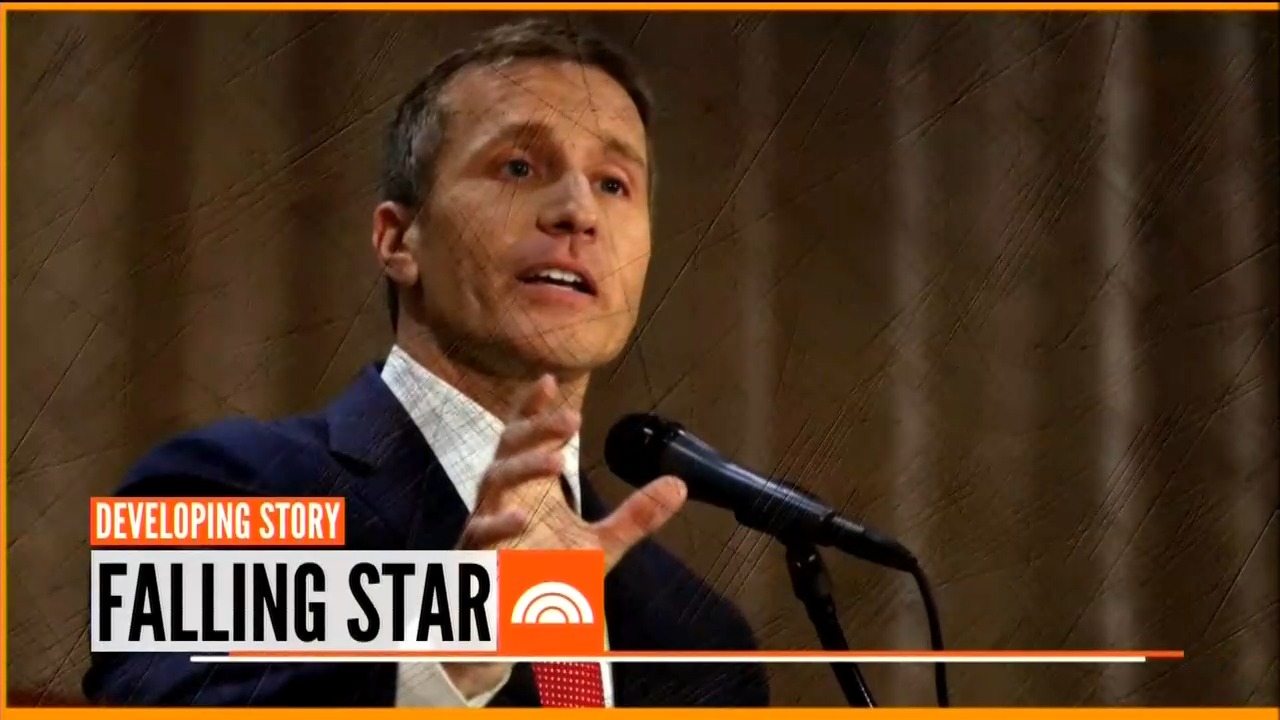 On NBC’s Today, co-host Savannah Guthrie slightly altered the talking points: “Missouri's Governor, Eric Greitens, is gone. Once seen as an up and coming star in Republican politics.”

Yet, reporter Ron Mott stuck to the more popular language, noting: “The embattled Republican governor, once a rising star in the party, lashed out at critics in the face of multiple controversies and a bipartisan impeachment effort." 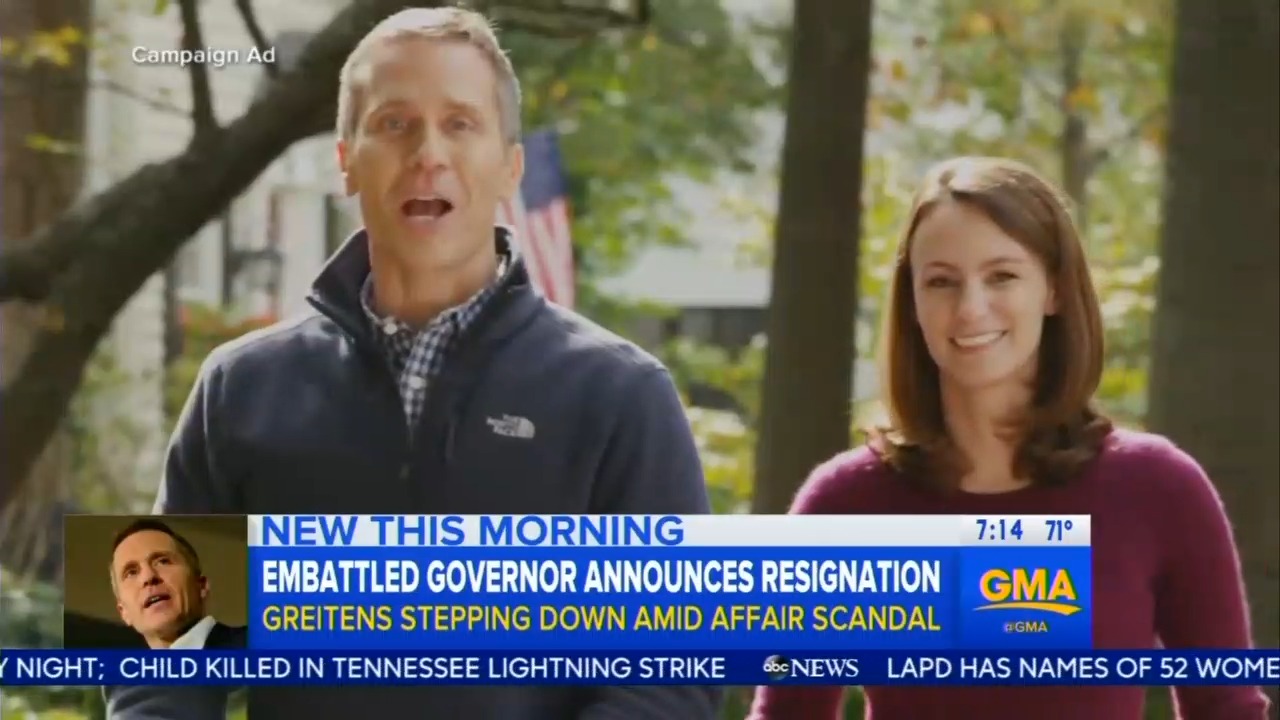 On Tuesday night's evening newscasts and Wednesday's morning shows, ABC, CBS and NBC identified Greitens nine times as a Republican. Yet on September 25, when disgraced Democrat Anthony Weiner was sentenced to 21 months in prison for sexting crimes, his Democratic Party affiliation was ignored by CBS and NBC. When Weiner plead guilty, five days earlier, ABC and NBC censored the Democrat’s party status. The New York Times routinely did this as well.

No one should defend the alleged actions of Governor Greitens. If guilty, his conduct is deplorable. But ABC, CBS and NBC have a double standard when it comes to educating the public about the partisan identity of Democratic politicians engaged in sexual misconduct.

Partial transcripts can be found below. Click "expand" to read. 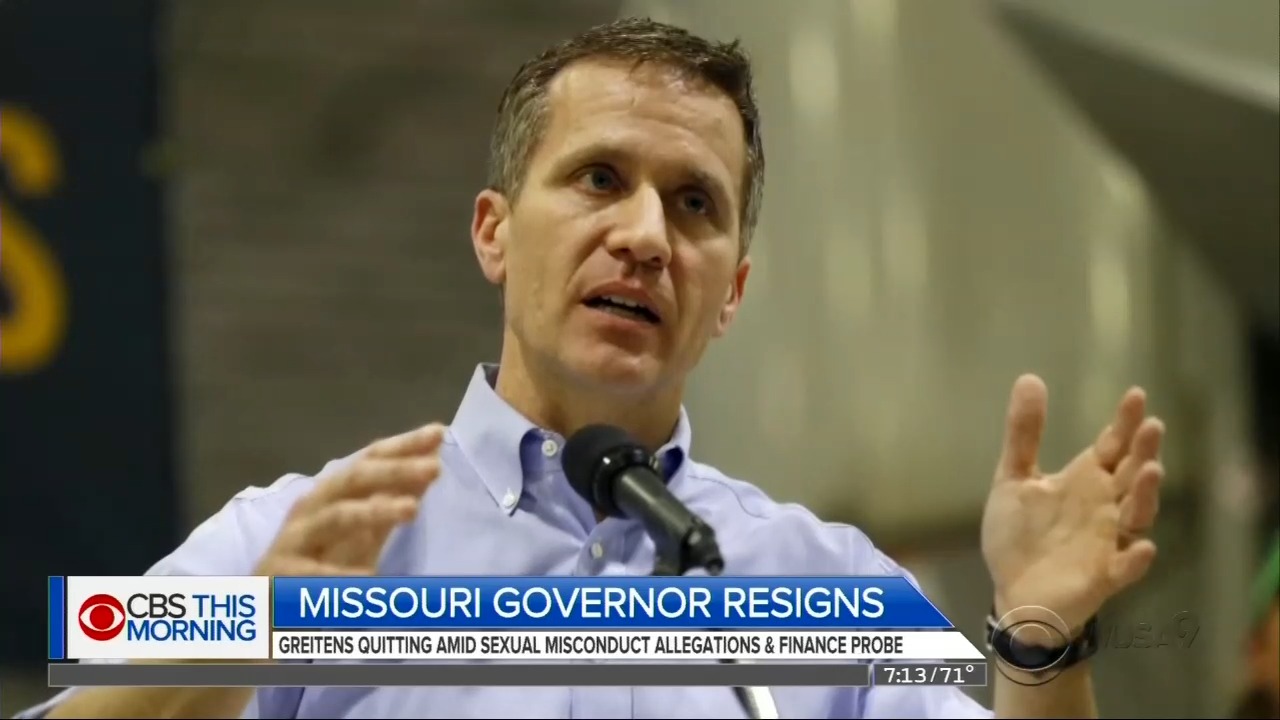 NORAH O’DONNELL: Missouri Governor Eric Greitens says he will resign on Friday. He was  considered a rising star in the Republican Party. Greitens was hit by scandals stemming from an extramarital affair, alleged blackmail, and claims of campaign finance violations. Adriana Diaz is here with the decision that followed months of debate. Adriana, good morning.

ADRIANA DIAZ: Good morning. Accusations that Greitens had an affair with a woman he blackmailed with a partially nude photo became public in January. Since then, the Rhodes scholar and Navy SEAL has been fighting to stay in office while facing a growing number of calls from fellow Republicans to resign.

ERIC GREITENS: The last few months have been incredibly difficult for me, for my family.

DIAZA: Missouri Governor Eric Greitens did not admit to any wrongdoing as he announced his resignation on Tuesday, saying, quote, “the ordeal” has caused incredible strain for the family.

GREITENS: It’s clear that the forces that oppose us, there’s no end in sight.

DIAZ: Greitens faced a felony charge for an invasion of privacy for taking a photo of a partially nude woman without her consent. But the charge was later dismissed. In April, he was charged with another felony, alleging he misused using a donor list from a charity he founded to raise money for his campaign. And just two weeks ago, the Missouri legislature convened a special session to consider disciplinary action against the governor.

GREITENS: I know, and people of good faith know, that I'm not perfect. But I've not broken any laws nor committed any offense worthy of this treatment.

JEAN EVANS: I was actually relieved. I feel like this is the right step for the people of Missouri.

DIAZ: Senator Roy Blount, who stopped short of calling for Greitens to resign, said in a statement “the governor made the best decision for his family and his state.”

GREITENS: Starting Friday, Republican Lieutenant Governor Mike Parsons will serve as governor. As for the criminal charges against Greitens, the local St. Louis prosecutor says her office “has reached a fair and just resolution” and will release details later today. So, we’ll see.

ALEX PEREZ: Missouri Governor Eric Greitens, once a rising star in the Republican Party who ran on family values, overnight buckling under pressure.

SAVANNAH GUTHRIE: Also this morning, Missouri's governor, Eric Greitens, is gone. Once seen as an up and coming star in Republican politics, Greitens has resigned in the face of a sex scandal with some disturbing details coming to light. NBC’s Ron Mott is in the capitol city of Jefferson City, Missouri, Ron, good morning to you.

RON MOTT: Hey, there, Savannah. Good morning to you. This resignation takes affect at 5:00 P.M here at the state capital. Now, when he took office, Greitens vowed to clean up Missouri politics. But he’s leaving under some dark clouds. He has admitted to an extramarital affair. There have been allegations of campaign finance violations. All of which have led to a loss of trust. Elected on a pledge to end corruption, Missouri Governor Eric Greitens will now step down in disgrace.

ERIC GREITENS: I am announcing that I will resign as governor of Missouri, effective Friday, June 1st at 5pm.

MOTT: The embattled Republican governor, once a rising star in the party, lashed out at critics in the face of multiple controversies and a bipartisan impeachment effort.