CNN Weakly Challenges Avenatti's Threatening of Journalists: ‘What’s That About?’

Given how CNN views Donald Trump as a “grave and existential threat” to the survival of a free press, one would think that the network would aggressively challenge Stormy Daniels lawyer Michael Avenatti over his attempt to bully and threaten the conservative Daily Caller. Yet when Don Lemon talked to Avenatti on Monday night, he only gently brought up the intimidating e-mail sent by the lawyer.

As reported yesterday, Avenatti sent a threatening e-mail to the Caller, attempting to intimidate the journalists there into stopping the reporting the site has done on him. The subject headline was “Cut It Out” and the e-mail included sentences like this one: “Let me be clear. If you and your colleagues do not stop with the hit pieces that are full of lies and defamatory statements, I will have no choice but to sue each of you and your publication for defamation.”

Lemon quoted Avenatti saying, “This is the last warning.” But he only mildly wondered, “What's that about?” How would CNN react if Donald Trump wrote such an e-mail? 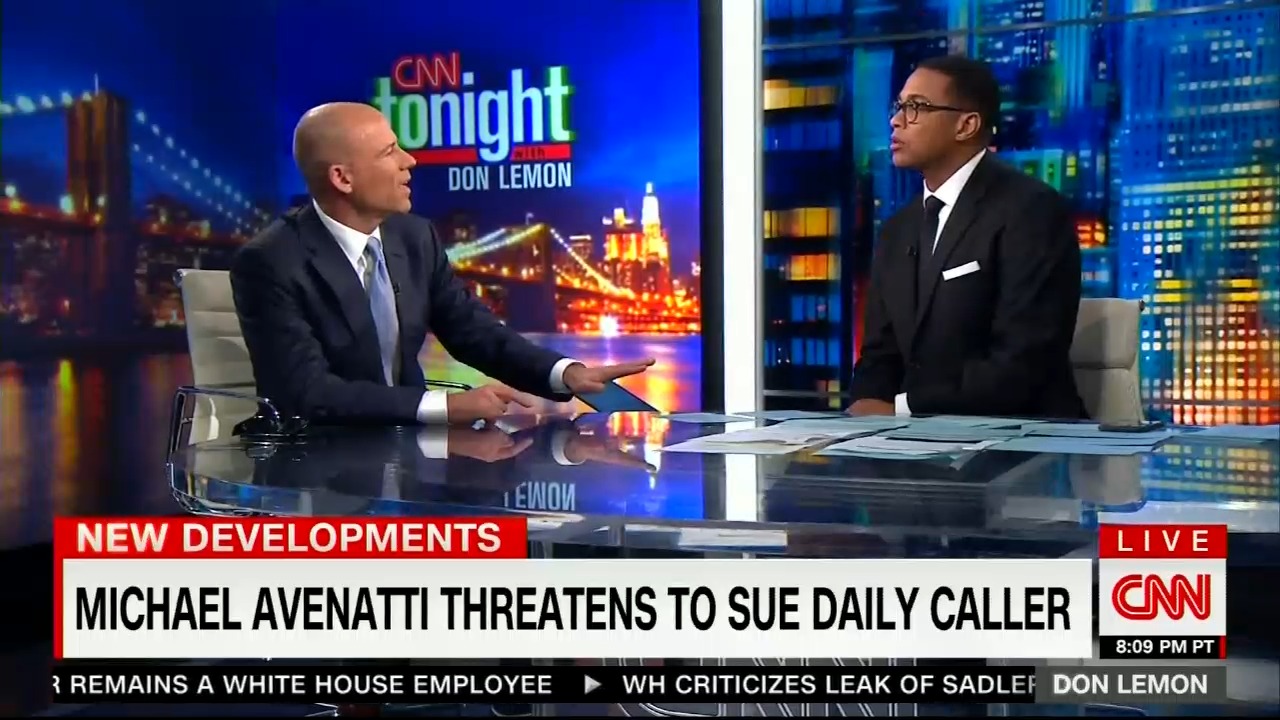 Avenatti spat back: “All journalists are not ethical. Just because they are journalists, there's good journalists and there's bad journalists.” Lemon accepted this, saying, “I get that.” He finally, haltingly, wondered:

On Sunday, CNN’s Christiane Amanpour warned that Trump represented “a grave and existential threat to reporters. White House correspondent Jim Acosta in January said it would take “dead journalists on the highway” to shake off the Trump “spell.”

Apparently CNN’s concern for journalists only goes so far though.

DON LEMON: OK. So let us —  so when you talked about —  you know, I think the -- did you call it character assassination or whatever trying to get you? Were you talking about The Daily Caller? Do you put them in that, because you know, they released, you know, Peter Hasson tweeted out your e-mail that you sent to him, right? And he said, you said, “We will expose your publications for what it truly is. We will also recover significant damages against each of you that participated personally. So, if I were you, I would tell Mr. Trump to find someone else to fabricate things about me. If you think I'm kidding, you really don't know anything about me. This is the last warning.” What's that about?

MICHAEL AVENATTI: Don, I will tell you exactly what it is about, okay. All attorneys are not ethical. All because you're an attorney doesn't mean you're ethical and you do what you're supposed to do. All journalists are not ethical. Just because they are journalist, there's good journalists and there's bad journalists. There's ethical journalists and there is unethical journalists. And you know what Don, if we encounter journalists that don't get their facts straight by designed, don't follow the basic standards of journalism, purposely skews stories to fit their own political dialogue and what they want the message to be, we are going to continue to call them out on that. And there is nothing wrong with that, in anyway shape or form. Just like when individuals encounter unethical attorneys, there is nothing wrong with calling attorneys out on that.

AVENATTI: No, I think you're talking apples and oranges.

LEMON: Why is that?

AVENATTI: For the following reason. My e-mail is no different than a cease and desist or retraction type e-mail or rather that is received by numerous media organizations on a consistent basis, and there is nothing wrong with that.

LEMON: Why did you put it on the record on that?

But let me say this, and that is, there's nothing wrong with that e-mail that I sent, and it's far different if you look at the level of communication and the dialogue, the words that are chosen. It's far different than what we have seen from Michael Cohen threatening people's families, threatening physical harm on them. You can't compare what I sent to that.

LEMON: Mmmhmm. I do have to say it's interesting that in the last, I guess, six weeks or so, much of the information —  I've said this to other guests, but I've never said it to you -- much of the information like AT&T, Novartis and all that, I don't know if we would have known about it. I know the Special Counsel knows about that, but I don't know if the Special Counsel would have revealed that. Do you understand what I'm saying?

LEMON: When you pull a string, you don't know when it's coming, but I just wonder, where does it end? How far do you go with it?

AVENATTI: Look, I think that we have disclosed, in fact I know that we've disclose a significant amount of information, and we have at least started the dialogue on a lot of these issues that I think are very important to the American people to know exactly what Mr. Trump was doing, what he knew, what Mr. Cohen was doing, what was he selling, meaning Mr. Cohen, how much money was he getting? We still don't know where all this money went. These are very important questions that the American people deserve answers to. And if by disclosing information we have assisted in starting that dialogue and getting the American people answers, so be it.