On Monday morning, Stormy Daniels’s attorney, provocateur, and frequent liberal cable news guest Michael Avenatti threatened to sue our friends at the Daily Caller, stating in an e-mail that he could move to “sue each of you and your publication” for “hit pieces that are full of lies and defamatory statements.”

Avenatti’s e-mail came less than 12 hours after a Sunday night piece by associate editor Peter Hasson and media reporter Joe Simonson entitled “With Avenatti In The Spotlight, His Own Questionable Past Emerges.” In it, the pair exposed Avenatti’s past as having been “littered with lawsuits, jilted business partners and bankruptcy filings.” 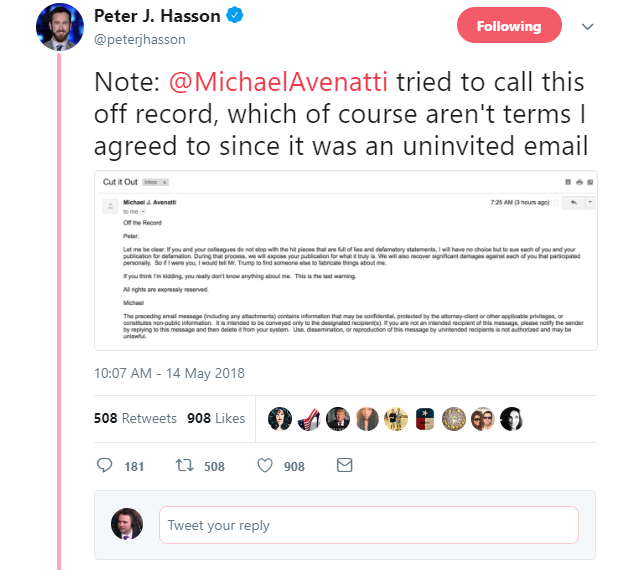 Check out the full piece here because it’s a must-read, filled with information that the liberal media has failed to do on their own.

As for the e-mail, Avenatti sent it at 7:25 a.m. Eastern to Hasson with the subject line “Cut It Out,” foolishly claiming the e-mail was “Off the Record.”

Amusingly, Avenatti revealed that he doesn’t understand how it works because Hasson didn’t agree to those terms. Also, Hasson noted in a tweet that the e-mail was unsolicited so that only bolstered his case to take it public.

Avenatti put on a macho facade, first telling Hasson: “Let me be clear. If you and your colleagues do not stop with the hit pieces that are full of lies and defamatory statements, I will have no choice but to sue each of you and your publication for defamation.”

Clearly trying to bully journalists into not writing pieces he dislikes, Avenatti added that, if given the chance in discovery, he would “expose your publication for what it truly is” and “recover significant damages against each of you that participated personally.”

He concluded this actual attack on the free press by suggesting that Hasson (and Simonson) got their information from President Trump himself followed by another warning: “So if I were you, I would tell Mr. Trump to find someone else to fabricate things about me. If you think I’m kidding, you really don’t know anything about me. This is the last warning.”

Hasson later tweeted in reference to a question from CNN’s Andrew Kaczynski about “what evidence does Avenatti have” that Trump was the Daily Caller’s source that “he has none because there is none.” Instead, “[i]t’s a weak smear attempt on [Simonson’s] and my reporting.”

So, CNN media team, you might want to get on this story if, as you’ve repeatedly shown, you’re concerned about what you’ve deemed destructive and unfair attacks against the press in the age of Trump. Thankfully, as of this post’s publication, reporters from establishment media figures such as New York Magazine’s Olivia Nuzzi, CNN’s Ryan Lizza, Business Insider’s Josh Barro, and Matt Pearce from the Los Angeles Times have come forward to defend Hasson and Simonson.

For all of their complaints about this being something celebrities, Donald Trump, or even Michael Cohen would resort to, Avenatti’s shown himself yet again to be a complete hypocrite.

So, I ask the question — who’s the snowflake now, Michael Avenatti?

[SUBJECT LINE: Cut it Out]

MICHAEL AVENATTI: Off the Record

Let me be clear. If you and your colleagues do not stop with the hit pieces that are full of lies and defamatory statements, I will have no choice but to sue each of you and your publication for defamation. During that process, we will expose your publication for what it truly is. We will also recover significant damages against each of you that participated personally. So if I were you, I would tell Mr. Trump to find someone else to fabricate things about me.

If you think I’m kidding, you really don’t know anything about me. This is the last warning.

All rights are expressly reserved.

The preceding email message (including any attachments) contains information that may be confidential, protected by attorney-client or other applicable privileges, or constitutes non-public information. It is intended to be conveyed only to the designated recipient(s). If you are not an intended recipient of this message, please notify the sender by replying to this message and then delete it from your system. Use, dissemination, or reproduction of this message by unintended recipients is not authorized and may be unlawful.