Katie Couric Defends Lauer: ‘A Lot of NBC Execs’ Have Secret Buttons in Their Offices

Katie Couric, half of the former Today show duo with Matt Lauer, explained away the sketchy, secret button used by her disgraced ex-colleague: “A lot of NBC executives” have that. Appearing on The Wendy Williams Show, Couric waded into dangerous territory: “I think the whole button thing.... a lot of stuff gets misreported and blown out of proportion.”

Couric continued her assessment of “the button.” Note how she altered what it apparently did: “A lot of NBC executives have those buttons that opened and closed doors.” No. Here’s how Variety first reported the purpose of Lauer's office button:

His office was in a secluded space, and he had a button under his desk that allowed him to lock his door from the inside without getting up. This afforded him the assurance of privacy. It allowed him to welcome female employees and initiate inappropriate contact while knowing nobody could walk in on him, according to two women who were sexually harassed by Lauer.

“Locking” is the key word here. Not opening and closing as Couric massaged.

Host Williams appeared shocked by the explanation that “a lot of NBC executives” have a similar button:

KATIE COURIC: They did. I mean, it was really just a privacy thing. It wasn’t —

Still, when asked if she had such a button, Couric quickly shot back: “I did not. No, no, no.” As Williams looked appalled, Couric dug deeper: “I don't think it was a nefarious thing. I really don't. And I think that is misconstrued.”

Finally, she stopped and added: “You can look at me like that if you want.”  You’re not helping, Katie. Perhaps Couric should go back to promoting her TV special on sex robots.

WENDY WILLIAMS: Before Matt was fired I was really hoping that you and Matt would get back with him. And so he’s gone and Hoda’s in for him. And that’s still your dear friend, I would imagine. 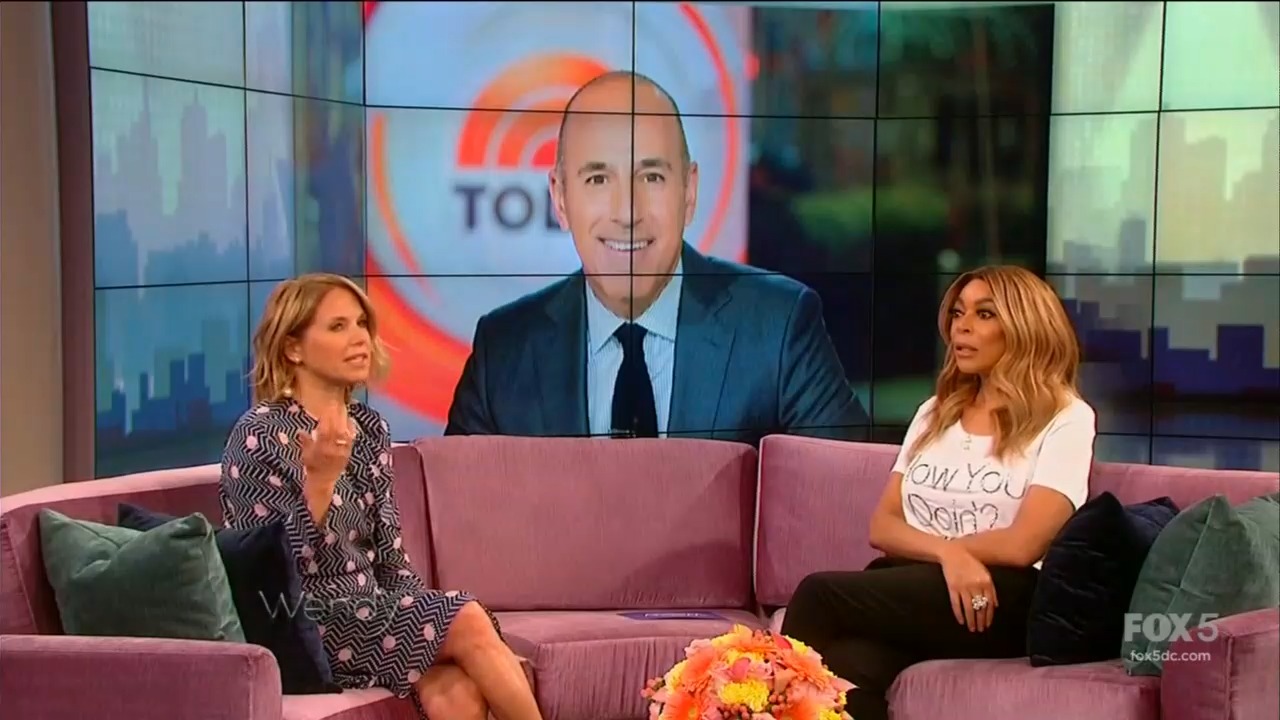 KATIE COURIC: Yeah. Well, you know, it’s been a painful time for a lot of people who work with Matt and care about him and never witnessed or experienced any of this behavior that is now obviously being talked about. I don't know the full extent of all of the things that happened. I can only talk about my personal experience and I was treated respectfully and appropriately.

WILLIAMS:  Do you think he has a chance to ever get back on TV?

COURIC: You know, that is not for me to say, Wendy. It depends on, sort of, the path he choose and how he decides to handle what has happened. And the full of extent of what has happened I don’t think has been revealed.

WILLIAMS: I don’t. You know why? It is different when you are a credible news person. And then something like this comes out with all the allegations. It’s a totally different mind set. Like, we trusted you for decades. You, with the alleged button under your desk and all that stuff. No, I don’t.

COURIC: I think it would be challenging. I do.

COURIC: They did. I mean, it was really just a privacy thing. It wasn’t —

COURIC: I did not. No, no, no. Honestly I think it was an executive perk that some people opted to have and I don't think it was a nefarious thing. I really don’t. And I think that is misconstrued. [Williams looks appalled.] You can look at me like that if you want.

WILLIAMS:  We agree to disagree. I’ve known you for a long time. But you are on the “say it like you mean it show” and I can’t front.