NRA representative Dana Loesch on Friday blasted CNN for allowing slanderous attacks to stand uncorrected against the organization on the network. Loesch battled New Day co-host Alisyn Camerota, assailing the unchallenged claims that NRA members are “murderers” and that gun supporters like Marco Rubio are just like the Parkland shooter.

Camerota was appalled at the NRA spokeswoman’s comments at CPAC on Thursday where she said that journalists “love” mass shootings. “How dare you,” cried Camerota. Loesch shot back:

On your network you've allowed accusations against me and millions of law- abiding Americans as —  and to be indicted as child murders. I've watched you, Alisyn, on your program, at this very time slot, and you —  you've allowed that to stand uncorrected on your network.

This prompted some amnesia on Camerota’s part:

LOESCH: You've allowed it to stand uncorrected on your network.

Except, Loesch is right. At the CNN town hall, NRA members were called “murderers” by the crowd. It went without correction or calls for calm. At another point, Senator Marco Rubio was equated with the school shooter.

On Monday, student survivor David Hogg and others smeared the NRA as murderers.

A partial transcript is below. Click “expand” to read.

ALISYN CAMEROTA: Let's just start with the sound bite that we just played of you at CPAC. “You say many in the media love mass shootings. You guys love it. You love the ratings. Crying white mothers are ratings gold to you.” So, Dana, why would you say -- why would you make a statement like that?

LOESCH: Because it's true. Alisyn, because there are many, not all — 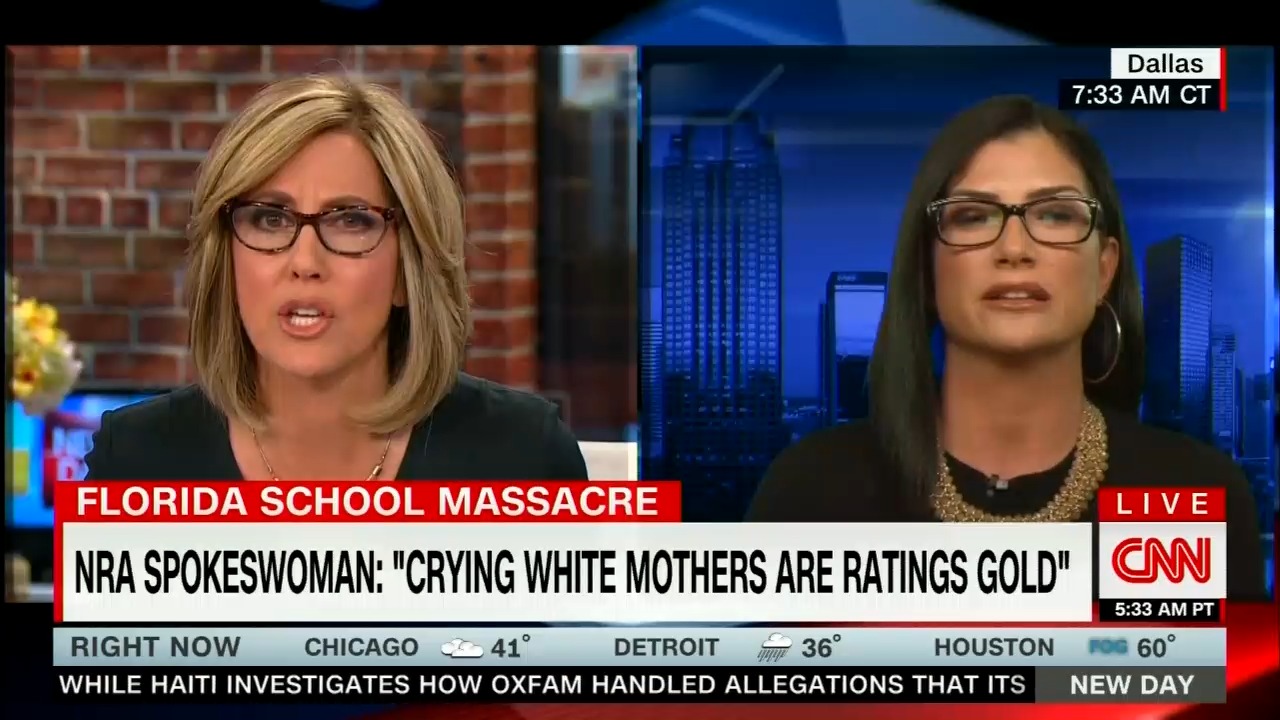 LOESCH: Well, I said many. I said many, not all. But I do think that the way that network and —

CAMEROTA: Who? Who loves mass shootings?

LOESCH: I do think that many in the media do because they like the ratings aspect of it.

LOESCH: And it's true because it's wall-to-wall coverage. They put the murder's face up on loop —

LOESCH: On televisions all across America more than they discuss even the victims or survivors.

LOESCH: That individual's name has been mentioned and is still mentioned on your network.

LOESCH: And, Alisyn, I want to say something to you really quickly.

LOESCH: I think Jake Tapper did an admirable job. I think that he -- I think ultimately lost control. I have a lot of respect for Jake. I think he —  I think it was a tough spot that he was in also.

LOESCH: But I do think that maybe perhaps the way that the network was hosting this discussion, it didn't seem that the network perhaps intended for it to be geared towards discussing solutions. Which, I get it, emotions are high. And it's awful.

LOESCH: I mean it's not even —  barely been a week ago.

LOESCH: But I really want to have that discussion as to what we can do to stop this in the future.

CAMEROTA: Yes, so do I. Of course. That's why we had the town hall. So, listen, that's why we had lawmakers there, so that the kids could pose questions directly to them. But, Dana, it's just —  it's just malicious, actually, that you would say that. I don't know anybody in the media who likes mass shootings. You're wrong on every single level. We pray that there's never another one. And the idea of them being ratings gold —

LOESCH: I hope that you do. But, Alisyn, I have to interject here.

CAMEROTA: Hold on, Dana, let me answer this. I have to —  you just made a malicious statement and I have to respond. Guess what, they're not ratings gold because Americans have reached saturation level. They're so sick of it.

LOESCH: I hope they have.

CAMEROTA: It's so heartbreaking that they actually often turn away. And we still have the conversation trying to find solutions.

LOESCH: I need to interject, though, Alisyn. You're saying that though it's malicious.

LOESCH: But let -- you're saying that it's malicious, but yet on your network you've allowed accusations against me and millions of law- abiding Americans as —  and to be indicted as child murders. I've watched you, Alisyn, on your program, at this very time slot, and you —  you've allowed that to stand uncorrected on your network.

LOESCH: You've allowed it to stand uncorrected on your network.

LOESCH: If you want to have a discussion of maliciousness.

CAMEROTA: It's not true.

LOESCH: But I don't want to get here, Alisyn, let me go back and forth with you.

LOESCH: It is true. Your network coverage --

CAMEROTA: We have to be facts-based.

CAMEROTA: Hold on, let me get in -- I will make my statement and then you can respond. You know that you're using heated rhetoric. You're using inflammatory rhetoric. How is that part of the solution?

CAMEROTA: Answer my question. You, at CPAC, used that inflammatory rhetoric.

CAMEROTA: Fine. Why did you use it at CPAC? Why are you doing that?

LOESCH: Because it's true, Alisyn. And maybe the truth hurts, but it's true, particularly with the way that many in the media have covered this.

CAMEROTA: We love mass shootings? It's not true. You know this. That's just not true.

LOESCH: Alisyn, let me ask you this.

CAMEROTA: How dare you?

LOESCH: And do you want to know why that is? That's scary. I want to stop that.