Appearing at the Conservative Political Action Conference (CPAC), NRA representative Dana Loesch on Thursday absolutely demolished a hypocritical, gun-grabbing media and politicians who don’t really do anything to keep mentally unbalanced people from buying weapons. She prefaced: “I say this to the reporters in the media, I say this to the people at Slate and the Salon and Think Progress and Media Matters.”

At one point, Loesch assailed: "Many in legacy media love mass shootings." See video below:

She later demanded, “I want you to all ask yourselves where are the stories about how 38 states submit less than 80 percent of criminal convictions to the background check system? It's only as good as what's submitted to it.” 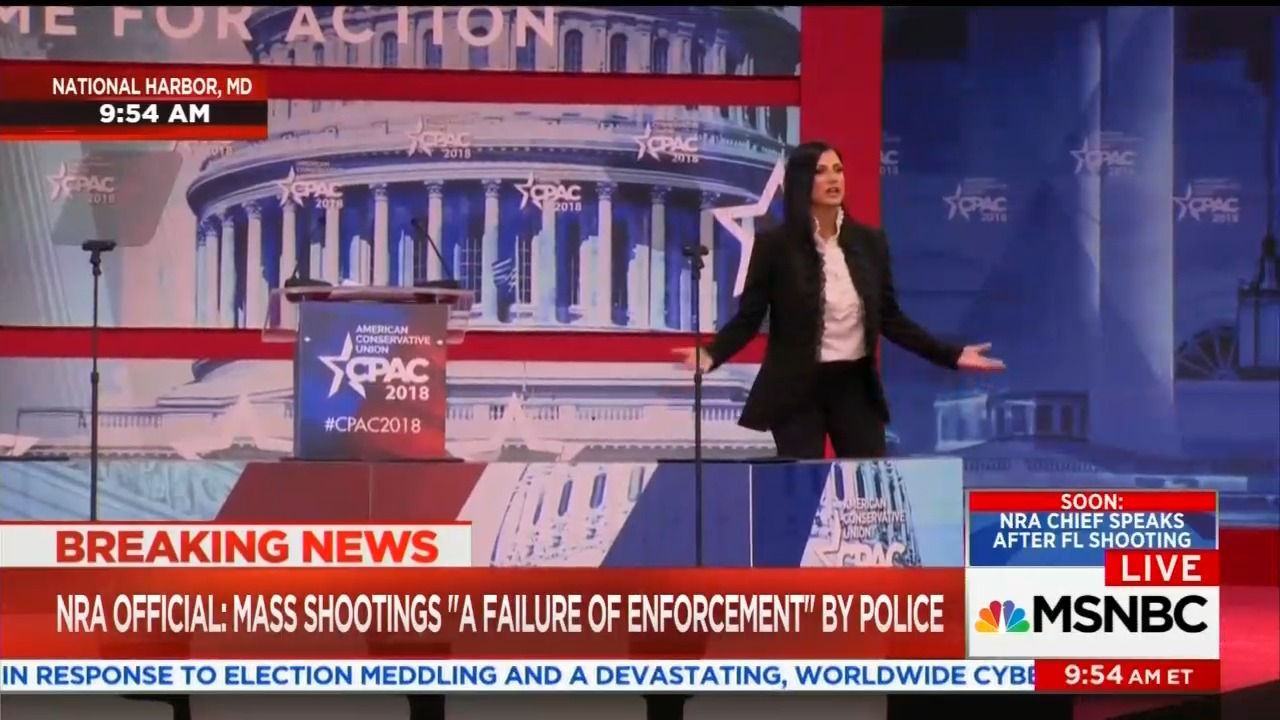 In her most incendiary comments, Loesch decried journalistic exploitation of mass shootings, saying:

MSNBC carried part of Loesch’s remarks. After it ended, an offended Stephanie Ruhle, a host on the network, responded to the network’s angry, liberal viewers for even carrying the speech:

To our viewers who tweeted us angrily for airing Dana Loesch, let’s talk about that for a minute... The NRA has a huge amount of power in this country and we can bury our heads in the sand and ignore what they have so-to-say or actually listen to it. You may not like what she has to say. And Dana, by the way, your comment “many in the legacy media love mass shootings,” I can only speak for myself, I absolutely don’t.

DANA LOESCH (at CPAC): In Charleston, this murderer was able to pass a background check even though he was a prohibitive possessor because as former FBI director James Comey said, “They made a mistake. It was a paperwork error.” Sutherland Springs, this mass murderer was able to go and mow down a church because, why, the Air Force did not report his conviction. The fact that he was mentally unstable to the NIK system, which by the way, the organization that I represent, five million plus members, average everyday Americans, moms and dads, they do the school run. They go to the grocery stores, they're students, hunters, they're people like me who simply don't want to be assaulted in the parking lot if I go to the grocery store and get a gallon of milk at night, they are people like us and we will not be gas lighted into thinking that we're responsible for a tragedy that we had nothing to do with. It is not our job to follow up on red flags. It is not our job to make sure that states are reporting to the background check system. It is not our job, a failure of law enforcement is not a failure of the law. It is a failure of enforcement.

LOESCH: Now, if all of those in the legacy media are arguing for the NRA to give us the authority and the resources to go and follow-up on these red flag events, I'll volunteer right here and now to do it. We have resources available at any one's disposal if they want to reinforce their schools but I'll say it again loud and clear, we're parents too. And I believe as the millions of members that make up the NRA and millions of people just in the United States in general, don't you think our kids deserve the same protection as our celebrities? Don't you all think that our kids deserve the same protection as our athletes? As our banks?

LOESCH: After the Parkland tragedy, media was rushing to identify who this person was and Politico [sic] ran a headline that said that a white nationalist that one of us. Here's a message for people in the legacy, media, many of you, not all. But a lot of you. “Don't trust white nationalists. Don't use them as sources. Don't trust them.” Senator Byrd's legacy lives on I guess. If you take anything from my remarks to you today and I say this to the reporters in the media, I say this to the people at Slate and the Salon and Think Progress and Media Matters and the people who we keep clothed and fed because their beats are us, right, that's job creation. I want you to all ask yourselves where are the stories about how only 38 states submit less than 80 percent of criminal convictions to the background check system? It's only as good as what's submitted to it. How many of you knew that? No. Wasn't isn't Dianne Feinstein calling for that? I have to question whether or not they want those systems to fail. Where are those headlines? Where are those headlines? By the way, do you realize that that's -- those are millions of people who have been adjudicated mentally unfit or criminally dangerous that are able right now to go and purchase a firearm because the politicians who are given the most lip service about it have done the least about this.

They could change this tomorrow. They could change it today. But they won’t. Because they're exploiting a tragedy for an agenda. Shame on you. We call B.S. Where are the stories about how —  here's a stat for you, from 1950 to July of 2016, 98.4 percent of mass shootings have taken place in gun-free zones. That's a fact. You guys are welcomed to go --- It's all online. I mean, there's this thing called Google. It may be the same place you had the white nationalist to quote for your political headlines. Fake news and all, you know.

LOESCH: Politics is down stream from pop culture. It's going to happen in culture first before it happens in policy. Remember that. A very good friend of mine said that. Never, ever, ever compromise your principals ever. It is your job to change hearts and minds, not the government. A free people have the right to criticize and hold accountable our free press. We are free. We are conservative. Our principals are proven and to anybody out there who says that conservatism is dead, I declare here and now that we are just getting started and it will be you who is left in the dust bin of history. God bless you all. God bless the Second Amendment. Have a great week.