According to Leeann Tweeden, a radio anchor in Los Angeles, Democratic Senator Al Franken groped and kissed her without consent in 2006. Given how quickly journalists jumped on the Roy Moore story, will they offer equally aggressive coverage for this liberal politician from Minnesota? Oh and there’s photographic evidence of what Franken did.

Tweeden recounted being on a USO tour in 2006 to entertain the troops. Franken, who was not then a senator, wrote a skit that included him kissing the model/host. She recounted his predatory behavior:

He repeated that actors really need to rehearse everything and that we must practice the kiss. I said ‘OK’ so he would stop badgering me. We did the line leading up to the kiss and then he came at me, put his hand on the back of my head, mashed his lips against mine and aggressively stuck his tongue in my mouth.

I immediately pushed him away with both of my hands against his chest and told him if he ever did that to me again I wouldn’t be so nice about it the next time.

I walked away. All I could think about was getting to a bathroom as fast as possible to rinse the taste of him out of my mouth.

I felt disgusted and violated. 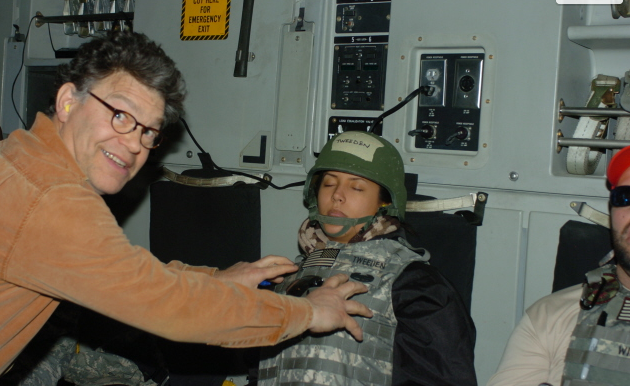 The tour wrapped and on Christmas Eve we began the 36-hour trip home to L.A. After 2 weeks of grueling travel and performing I was exhausted. When our C-17 cargo plane took off from Afghanistan I immediately fell asleep, even though I was still wearing my flak vest and Kevlar helmet.

It wasn’t until I was back in the US and looking through the CD of photos we were given by the photographer that I saw this one:

I couldn’t believe it. He groped me, without my consent, while I was asleep.

I felt violated all over again. Embarrassed. Belittled. Humiliated.

How dare anyone grab my breasts like this and think it’s funny?

This is the same Al Franken who made rape jokes about another journalist, Lesley Stahl:

The Republican Party’s latest release from the archives of Democratic Senate candidate Al Franken’s past is a 13-year-old New York Magazine description of a Saturday Night Live writers’ meeting.

During the meeting, writers are brainstorming about how to develop a sketch in which one of the actors plays 60 Minutes commentator Andy Rooney, who finds an empty pill bottle in his desk.

According to the article, Franken’s suggestion includes Rooney saying: “I give the pills to Leslie [sic] Stahl. Then when Leslie is passed out, I take her to the closet and rape her. Or ‘That’s why you never see Lesley until February. Or, ‘When she passes out. I put her in various positions and take pictures of her.’ ”

Alex Griswold of the Washington Free Beacon found an old tweet from 2014 of the Democratic Senator speaking out about sexual harassment.

In September of 2017, Franken tweeted this: 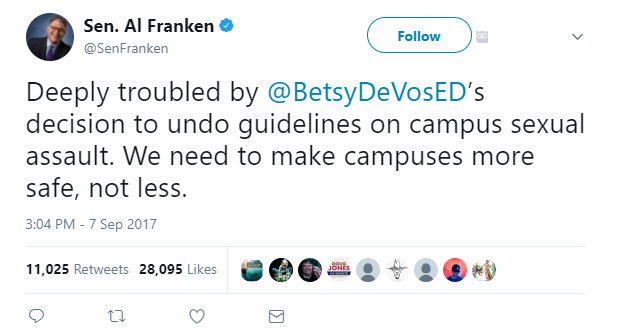 Journalists claim they like to point out hypocrisy. Here’s their chance.