All three networks on Thursday hailed the life of “American icon” Hugh Hefner, honoring the “beautiful ending” for the pornographer. CBS also made sure to tout the “progressive politics” of the magazine and support for abortion. In total, ABC, CBS and NBC devoted 27 minutes and 3 seconds to cheering “one of the most influential figures in social history.” All three networks led with Hefner first and covered the unfolding disaster in Puerto Rico second.

Though some of the coverage called his legacy “controversial,” journalists focused mostly on critiques from the left. This included feminists such as Gloria Steinem, rather than conservatives voicing concern about Hefner’s contribution to moral decline. CBS This Morning featured Hollywood Reporter editor Matt Belloni to cheer Playboy: “They did a lot of articles that were very progressive in the politics. They were pro-choice at a time when many outlets were not openly so.”

It’s perhaps unsurprising that a magazine promoting open and free sex might also advocate for abortion on demand. CBS co-host Charlie Rose responded to Belloni by recounting his own interest in the nudity-heavy magazine: “When I was growing up, there were two magazines you collected. One was Playboy and one was National Geographic.” 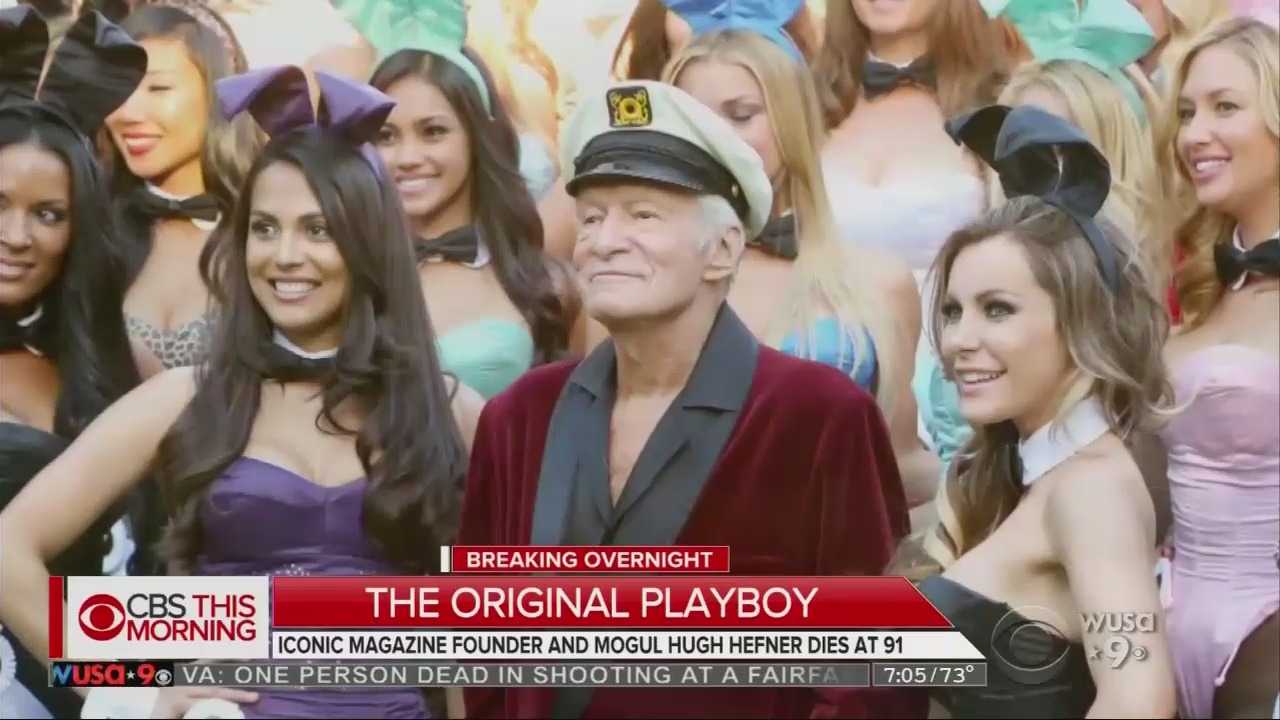 Earlier on the show, Vladimir Duthiers lauded Hefner as a civil rights icon: “And his TV show Playboy After Dark helped break down racial barriers.” In total, CBS This Morning devoted 8 minutes and 38 seconds to Hefner.

Over on the Today show, Matt Lauer parroted talking points from another liberal outlet’s tribute: “The New York Times did an obituary and compared Hugh Hefner to people like Walt Disney, Gatsby, Citizen Kane, iconic figures.” The co-host described, “Hugh Hefner being remembered this morning as a cultural pioneer who turned his sophisticated fantasy lifestyle into a global empire.”

Savannah Guthrie marveled at his legacy, “from the playmates to the protests to the pajamas.” Today offered 9 minutes and 44 seconds to the life and legacy of the pornographer. 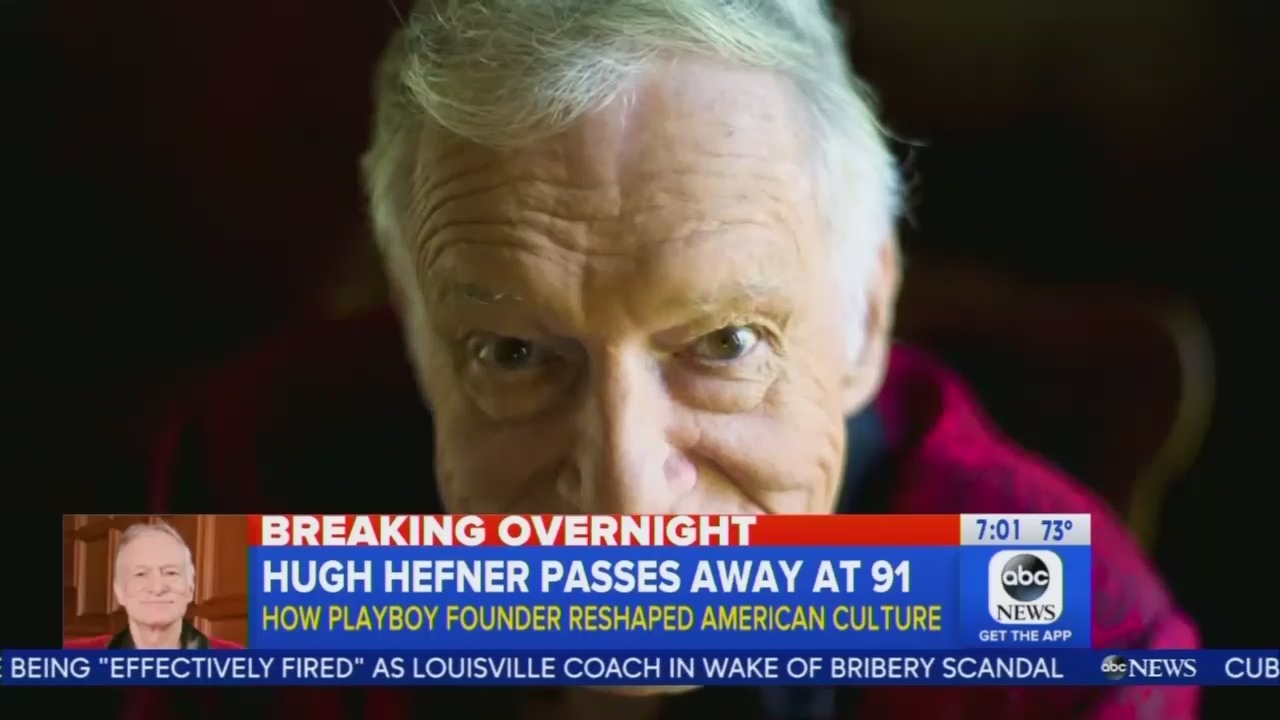 On Good Morning America, Nick Watt remembered the “activist and American icon.” He allowed that Hefner could be “a hero or a villain,” “depending on your point of view.” Yet, ABC’s coverage was mostly positive as reporter Chris Connelly touted, “Hefner never backed down from his insistence that he played a pivotal part of unshackling society from high bound notions about sex. And no doubt in his mind that he propelled society forward with his message.” GMA covered Hefner for 8 minutes and 41 seconds.

Back in May, CBS sneered at the death of Fox News founder Roger Ailes, hitting him for “fostering and exploiting divisions.” In 1997, the networks greeted the death of Mother Theresa as the end of a “fundamentalist Catholic.”

According to journalists, the head of a pornography empire is less contentious than those two.

A transcript of one of the CBS This Morning segments is below: 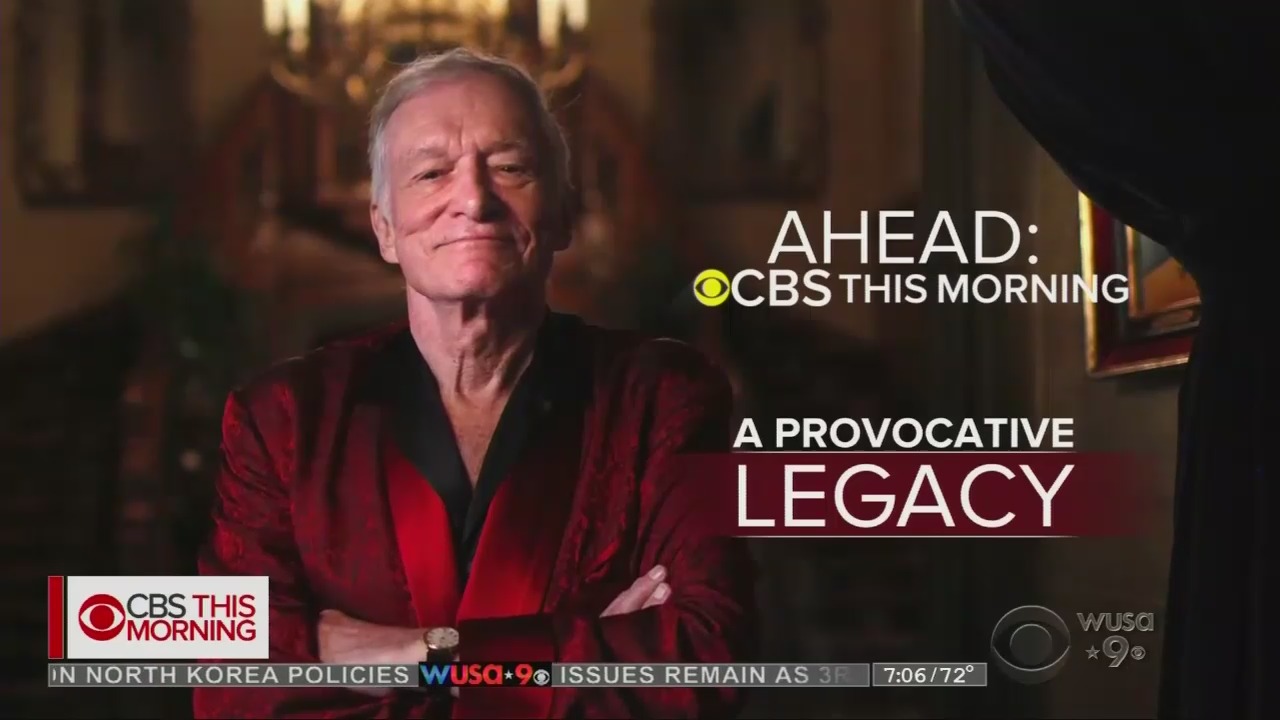 ROSE: We’re remembering the very influential life of Hugh Hefner. He made his network television debut in 1956 on CBS. Speaking to Mike Wallace, Hefner defended the image of Playboy magazine.

HUGH HEFNER: Sex will always be an important part of the book, because sex is probably the single thing that men are most interested in.

MIKE WALLACE: With this, I think you’ll agree. It’s a sniggering kind of sex. It’s a lascivious kind of sex. It certainly isn’t a healthy approach to sex. You would suggest that it is.

HEFNER: I not only suggest that it is, I would say rather strongly.

GAYLE KING: By the 1970s Playboy had more than seven million readers. Wow. And Hefner certainly was a household name. He built an empire on the simple idea that sex is important to people. With us from Los Angeles is Matt Belloni. He is editorial director of the Hollywood Reporter. Good morning to you, Matt.

KING: He certainly changed the magazine culture. He changed the American sex culture, if you will. That came with some controversy Back in the day, there were a lot of protests about how women were portrayed in the magazine. What do the critics say today about the legacy that he's left?

MATT BELLONI: I think it's a very complicated legacy because on the one hand Playboy was criticized. It was the first major mainstream magazine to feature nude women and it was in the context of politics and lifestyle and all these other things, but it was essentially a naked women magazine. People like Gloria Steinem at the time very opposed. Said Playboy could fill a book with what it doesn't know about women. But on the other hand it was filled with progressive politics. It was one of the few magazines that interviewed MLK and they interviewed Muhammad Ali. And they did a lot of articles that were very progressive in the politics. They were pro-choice at a time when many outlets were not openly so and very pro-First Amendment. And these causes that the culture caught up to, Playboy was doing it at a time in the '50s, '60s, '70s when it wasn’t that accepted from a big national magazines like that.

ROSE: When I was growing up, there were two magazines you collected. One was Playboy and one was National Geographic.

BIANNA GOLODRYGA: Two very different magazines. What happens going forward? We know that his son Cooper is going to be taking over the magazine. Circulation has dropped significantly as many industry magazines as well. How does the magazine and the brand go forward in a digital age?

BELLONI: It's a tough road. Recently Cooper Hefner, Hugh's son, has assumed control of the brand. But the magazine, they've gone through a rocky tenure with multiple editors. They got rid of nude pictures. Then they brought them back. They have a very licensing business where the brand is meaningful around the world. But in the U.S. the culture has really gone beyond Playboy. They have to figure out a way to make the Playboy brand relevent in today’s media and culture environment.