Poland’s President on Thursday dismissed as “fake news” media claims that his wife snubbed Donald Trump’s attempt at a handshake. Regarding hyperbolic stories in Newsweek, USA Today and by The Washington Post, President Andrzej Duda tweeted, “Contrary to some surprising reports my wife did shake hands with Mrs. and Mr. Trump @POTUS after a great visit. Let's FIGHT FAKE NEWS.” 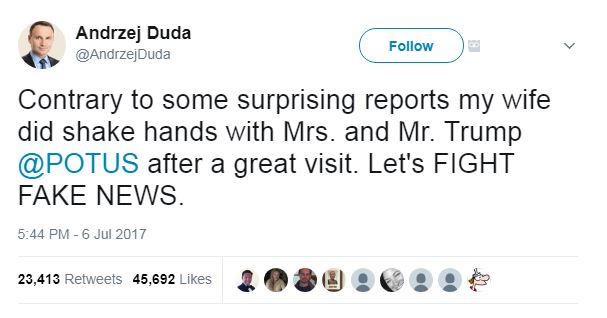 As anyone would know from looking at video that wasn’t edited down to a few seconds, first lady Agata Kornhauser-Duda shook hands with Melania Trump and then the President. Yet, Newsweek opted for this all-caps, blaring headline: “WATCH DONALD TRUMP HANDSHAKE REJECTED BY POLISH FIRST LADY IN HILARIOUSLY AWKWARD EXCHANGE.”

The website even slowed down a shortened version of the footage to showcase the fake snub. Eventually, Newsweek issued a (sort of) correction.

In a tweet, The Washington Post called the incident “super awkward.” Then, Chris Cillizza of CNN actually tweeted the shortened version with this freak out caption: 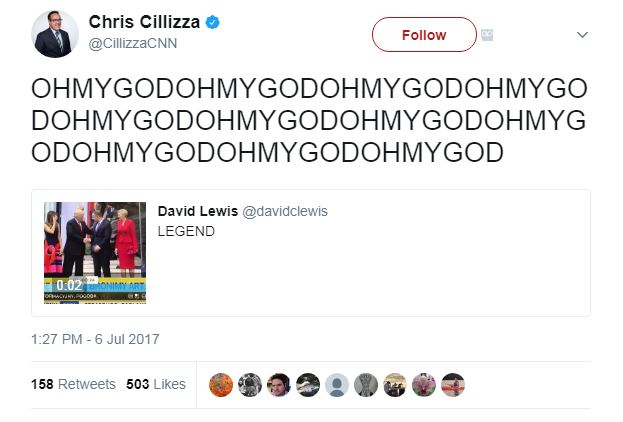