Desperate CBS on Trump and Russia: ‘Is There a Fire Coming?’

Democratic Senator Joe Manchin appeared on Monday’s CBS This Morning and offered some skepticism and tough questions for ex-FBI Director James Comey. Yet, the show’s hosts desperately pushed for signs that Donald Trump has done something deeply wrong.

After Charlie Rose admitted that Senator Mark Warner sees no “smoking gun” on the President and Russia, fellow co-host Gayle King pressed Manchin, “Didn't your mom say if there’s a lot of smoke, there must be fire? Is there a fire coming?”

Earlier, co-host Norah O’Donnell tossed Manchin a softball on what he wanted to ask Comey. Manchin surprised the hosts with skepticism on the ex-FBI head: “The question that's being asked by West Virginians is if you knew or thought there was obstruction of justice, why didn't you act on it?” 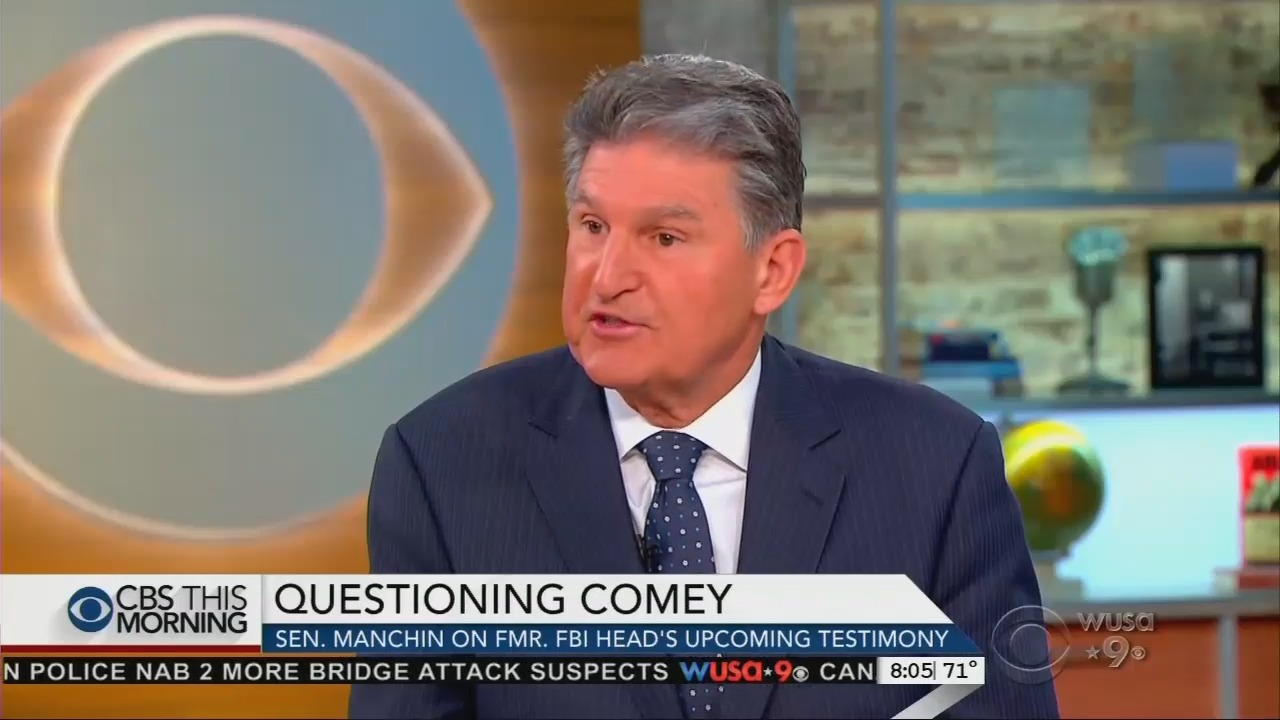 [Comey] was suspicious that he came back from that meeting and took all these notes and filed everything properly. What were his concerns? If there was deeper concerns, why wasn't something done at that time?

Maybe not the questions the CBS journalists were looking for. 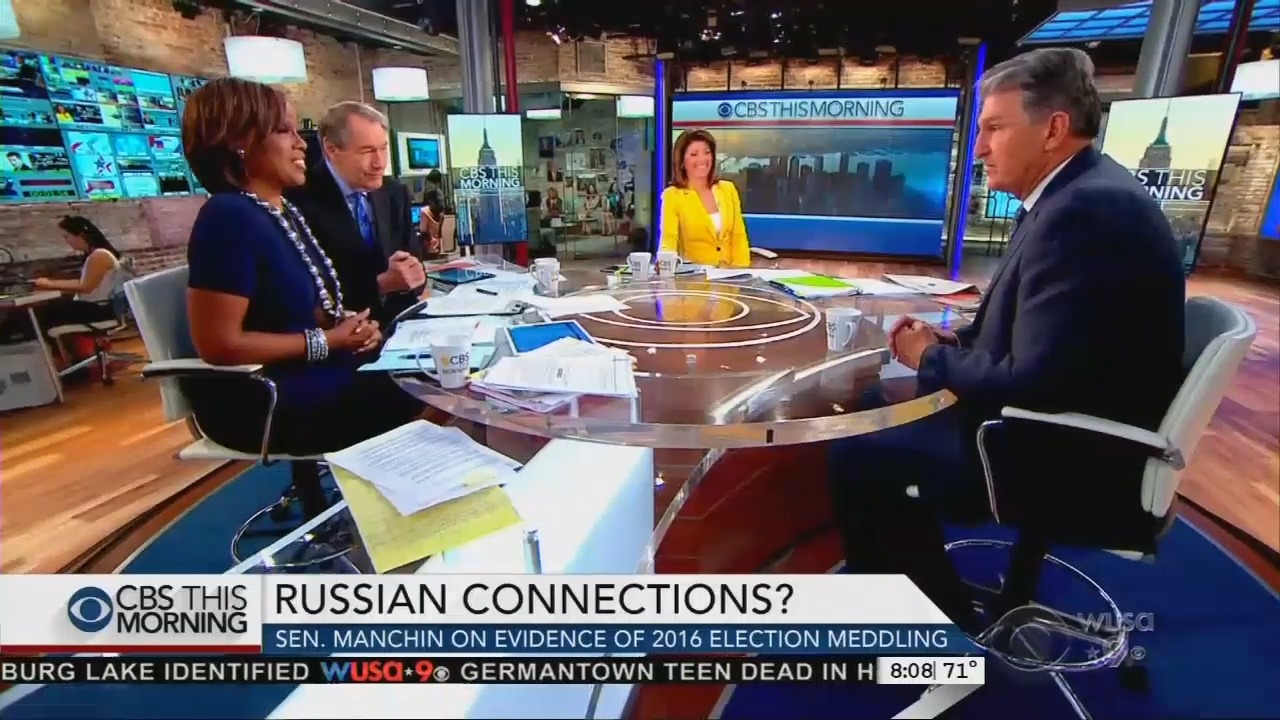 O’DONNELL: What's the big question you have for the FBI director?

JOE MANCHIN: The question that’s being asked by West Virginians is, if you knew or thought there was obstruction of justice, why didn't you act on it?

O’DONNELL: And what should the FBI director have done?

MANCHIN: We're anxious to hear this. How in depth— He was suspicious that he came back from that meeting and took all these notes and filed everything properly. What were his concerns? If there was deeper concerns, why wasn't something done at that time?

O’DONNELL: You were talking about what happened on Valentine's Day.

MANCHIN: It does raise questions. We want to know what Comey was thinking at that time, if he thought it had risen to the level of obstruction. If it had, why hadn’t been something been done? Why didn’t he act on it? He was still FBI director. If not, was that concerned filed away for what purpose?

CHARLIE ROSE: Is Director Comey going to be, either by himself or others, any restrictions as to what he can say?

MANCHIN: No. He will not go above an open source, basically what you’re saying and what’s being reported in the public. He's not going, as I understand it, into a classified intel. We'll do sometimes an open meeting, such as what you'll see Thursday. Then we go into another classified setting which is pretty secure.

ROSE: Is the President trying to get executive privilege for him, and if he is, will it be successful?

MANCHIN: I don't think so. We have not heard that whatsoever. It hasn't been brought to the committee as far as I know. I know it's been reported that that might be done.

GAYLE KING: If he tried that, what would be your reaction?

MANCHIN: I think it would be wrong. Absolutely wrong.

KING: I want to go back to the memos you say your constituents raised. Because we know that he took copious notes. Have you or anyone on the committee seen the memos and how important are they to this hearing on Thursday?

MANCHIN: I haven't seen those memos yet.

KING: Do you want to?

MANCHIN: Yes. We do. I want to see all the memos. I will say this: Our intelligence committee is made up of 17 of, I think, truly Americans. Not Democrats, Republicans, Americans that will make decisions based on the Intel. We have been told and always believe that the Intel will take you to the facts, the facts will take you to the truth. Then you will make your decision. I don't think any person, whether it's a homeless person or a person at the highest level of government, such as the President, is going to be spared if something is wrong. That’s the rule of law.

ROSE: Senator Mark Warner said there's a lot of smoke, but he’s seen no smoking gun. Is that your position?

KING: Didn't your mom say if there’s a lot of smoke, there must be fire? Is there a fire coming?

MANCHIN: There's a lot of smoke signals. There's a lot of people we know who are involved and had some sort of contact or relationships with Russians. The Russians are not our ally. They're not in this to make a better America. They want people to distrust their government, not to have confidence. That's what their intentions are, through their news media, propaganda, everything they do.

KING: Are you convinced we will get to the bottom of it, Senator? Listen, Vladimir Putin did an interview over the weekend with another network.

MANCHIN: I saw that.

KING: He said this is nonsense, foolishness, something along those lines. “You all are, really,  making all this up. It didn't happen the way you're saying.” Do you think we'll ever get to the bottom of this?

MANCHIN: Well, the intel is very pointed and direct that they have gotten more involved, they became more involved and did everything to become more involved than ever before. We've been going back in this charade for the last 30, 40, 50 years.

ROSE: Why do you think the President refuses to acknowledge that?

MANCHIN: That, I cannot answer. That could be the $64,000 question. We have to find out. I want to make sure this gets behind us. I said this, whether it be to Michael Flynn, who we knew when I was on armed services, “Help us prove your innocence. Don't make us pull out you're guilty.”

MANCHIN: I would sure hope so. This country needs us. It counts on all of us. The Democrats and Republicans have become so siloed that if you have a D by your name or an R by your name, you’re on the other side and you’re the enemy. I don’t think that’s the oath we all take. And we all take the same oath. Why can’t we get together and find out how can we have a tax reform that really works, gets rid of $20 trillion of debt, starts paying that debt down and secures the country.

O’DONNELL: What did you tell the President about health care in West Virginia?

MANCHIN: I told the President — I said, Mr. President, there's 180,000-some that received health care for the first time.

O’DONNELL: Under the Affordable Care Act.

KING: What was his response to that?

MANCHIN: He listened. He listened. We're hoping he'll work on that and act with us. You can't repeal where we're agreeing, 50 percent, pre-existing conditions, caps, senior doughnut hole being filled, children keeping — we believe in so many things. Why would you throw that out and start over. We can't get 60 votes.

ROSE: But it looks like a conflict. Do you believe, yes or no, that conflict can be solved before the 2018 election?

MANCHIN: I believe it has to be solved. If it doesn't, god help America. We can't continue down this road and you can't go back to what we had which is nothing.